Explore Athens on a Budget

Explore Athens on a Budget

Athens, the birthplace of democracy and the country's economic, political and cultural centre, proudly retains its classical history whilst staking its claim as a truly modern city. While some of us might fly in and head straight out to one of the Greek Islands, it's worth exploring Athens for the myriad attractions that won't break the bank before moving on. 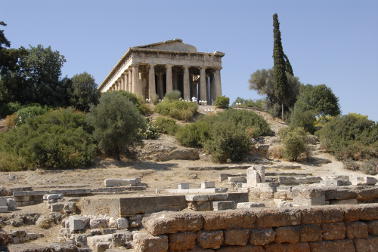 Free City Sights
Take in the sights, sounds and smells of the city's bazaar, in the streets of Monastiraki including Athinas and Eolou, where you'll find fresh flowers and produce, including fruit, cheese and olives. Watch the changing of the guards in front of the Tomb of the Unknown Soldier outside the Greek Parliament building in Syntagma Square. Right behind the Parliament building, enjoy the peace and quiet of the National Garden and the ruins contained therein. A world away from the hustle and bustle of the city, the National Garden offers meandering paths, swaying date palms, ponds and a wonderful children's playground.

Walk
If the budget is the thing, book accommodation as close as possible to Syntagma Square in the city centre. Take yourself on a walking tour, through the cobblestone streets of the old district, comprising Plaka, Thission and Psiri, and Monastiraki, which borders the Agora. Discover cheap meals, and the shops and stalls of Monastiraki Flea Market but get there early to avoid the crowds. Check out Stavros Melissonas's famous sandals, which were preferred by The Beatles, and enjoy people watching at Café Diodos. Head to Kolonaki and climb Lycabettus Hill to see the whitewashed chapel and panoramic views of the sea beyond the Acropolis.

The Acropolis
The Acropolis was still being built when Herodotus named his Seven Wonders of the World, otherwise it might have been included in his list. In exceptional condition, despite the years, the weather and the pillaging, see the Acropolis up close by day and by night, splurge on a meal at Brachera Restaurant in Abyssinias Square, the Fresh Hotel's Air Lounge Roof Bar, or The Acropolis Museum Restaurant, open only on Friday nights so reservations are essential. The Acropolis Museum is impressive and families will be thrilled with a specially designed backpack and an app to help them navigate selected exhibitions.

Museums and Galleries
Travelling with children? In Athens, their favourite place might be the Hellenic Children's Museum, where kids can use their imagination and skills to explore, experiment, create and play within grounds that offer top facilities as well as terrific educational programs. For something completely different, visit the Hellenic Motor Museum, the Theatrical Museum and the Museum of Popular Musical Instruments.

Nightlife
Athens is a different city by night, offering an exciting array of entertainment options, including local and international shows, live bands and DJs. Without much to spend on beverages, you'll probably avoid places like Akrotiri Boutique, Baraonda and Venue, and opt instead for the mid-range bars in Syntagma Square, Karytsi Square and Psiri.

Xanthe's favourite travel destinations are the Greek Islands, Indonesia, Fiji and Vanuatu. With a background in performing arts, fine food, wine and good times, Xanthe enjoys travel that brings her close to the locals and their leisure activities. Being a theatre reviewer means that Xanthe will always do dinner and a show before checking out the late night city scene and still be up early to find the markets and a decent pot of chai.
more articles from this author