As a kid, my family used to take me on a hell of a lot of road trips. Once a year we'd drive from Beirut to London and back. We'd also regularly head off on two-week trips into the Syrian desert. My family loved road trips and it's a passion that has definitely been handed down to me.

I must have been about five when we did the first big one; we'd do at least two a year from then on. What did I do to entertain myself on those mammoth journeys? I can't remember whining in the back about how long it would be until we arrived, even though I had no iPhone, no DVD player or video games to keep me busy.

Similarly, I can't remember grumbling about having to wander around strange cities for hours – visiting museums, archeological sites and so on, although maybe that's just the cleansing filter of age. Maybe I was just like my own kids – Jackson, 10 and Parker, 14 – and a total pain when travelling.

Last year, we drove from our home in the Cotswolds to Istanbul and back. My kids had more onboard technology than the Moon landing crew with which to keep them occupied during the long legs.

On the whole this worked out fine, but we still had the major problem of a 10-year-old boy needing to be kept amused in big cities.

A Secret World Is Suddenly Unveiled

Optimistically, we bought him one of those three-wheeled scooters. It turned out to be a boon, since it transformed him from grumpy pedestrian to eager street cruiser.

This year, the Joly family headed off around the Iberian peninsula on a three-week road trip of Spain and Portugal. We still had the in-car electronics, but the thrill of the scooter had somewhat diminished and I needed a new trick up my sleeve. 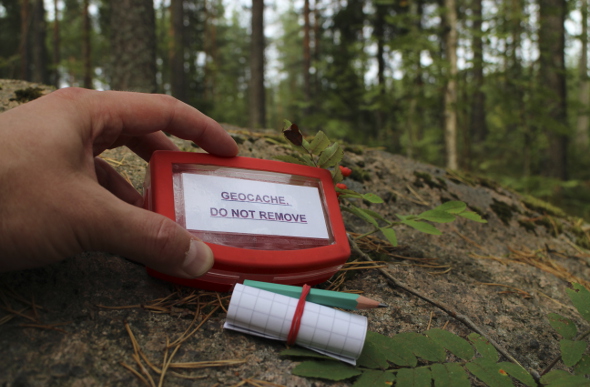 What we were looking for (images: Getty)

That's when someone told me about Geocaching. Essentially it's an online global treasure hunt. You download the app and then tap in "find my nearest Geocache" and a secret world is unveiled before your eyes.

There are over two and a half million containers (or caches) hidden in more than 180 countries around the world, and all you have to do is download the app and use the GPS facility in your phone to help find them.

Once you are within two metres or so of the cache you start the search, which turned out to be far more tricky that we'd imagined.

The containers vary in size, but most of those in big cities are small, waterproof and very well hidden. Some are attached magnetically to the underside of railings, others are hidden in trees, others … well, we failed to find quite a few, so I have no idea.

Most contain a little logbook that you sign to say that you have found the item, then you take a photo and log your find online.

In bigger caches there are items that you can take with you, as long as you replace them with something of equal or greater value.

The Kids Are Hooked And The Game Begins

When I first told the kids about the Geocaching app, they were unconvinced. So, in Madrid, as we wandered aimlessly around the enormous Casa De Campo, a former royal hunting estate west of the city centre, I opened it up, apprehensively.

There were about four caches nearby, so we headed towards the nearest one, which turned out to be by a metro station. We hunted high and low but couldn't find it.

If stuck, you can read a hint or even check previous cacher's photos for spoilers.

However, even with these we drew a blank and I feared that the kids would lose interest. Remarkably, it had them hooked and so we spent the rest of the day geocaching our way around the Spanish capital. 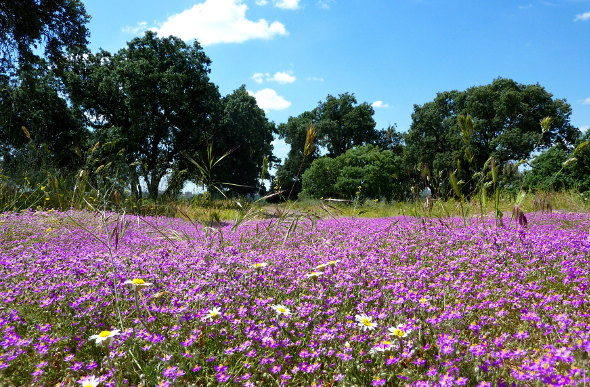 The Casa de Campo park where we had a breakthrough

We found our first cache after a 20-minute search in a seedy looking street just outside the park. It was an old film canister heavily wrapped in black tape and stuck to the back of a plant container by two little magnets.

I can't quite explain how excited we all were by the discovery.

Suffice to say, passers-by must have thought we were mad as we jumped up and down and high-fived each other in delight. Inside the canister was a tiny paper roll wrapped around a minuscule pencil. We signed our names, took a photo, and moved on. We had more caches to find.

Although this first cache was in a rather insalubrious corner of Madrid, most are in rather compelling locations, and have something of interest very near the hiding place. This was how we stumbled upon the oldest tree in Madrid in another park, Parque Del Retiro.

How to see the best of Spain. The Best Of Spain With Globus

Take the road to wonder. Finding Yourself Along The Camino De Santiago De Compostela

It was the smallest cache that we came across (about the size of a two-cent coin) and it took us a good hour to find, even though we were fairly sure that it was attached to the railings around the venerable tree.

Inside was another spy-sized log book, almost like a microfilm and we began to feel rather like undercover operatives moving in secret circles around the city, circles that only we, the privileged few, were aware of. 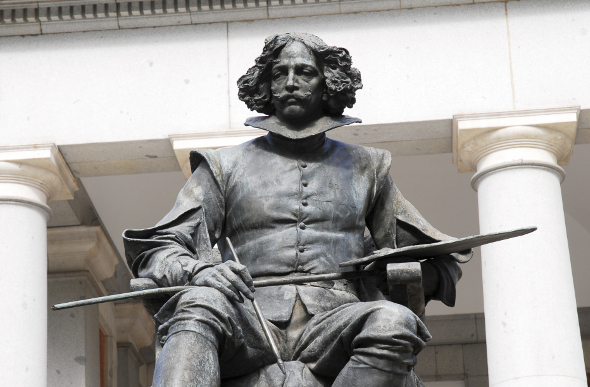 Velazquez at the Prado might not have been amused. The policeman certainly wasn't

Geocaching used to be known as Geostashing but changed the name because of potential misunderstandings based around the word 'stash'. We had our own misunderstanding outside the Prado museum where we got into trouble clambering over a statue of Velazquez in search of our booty.

A heavily armed policeman approached us and asked me what we were doing. My answer, in iffy Spanish, that we were looking for "serchio por tesoro incondido" did not appear to satisfy him and we were moved on at gunpoint.

We travelled on, geocaching our way through the peninsula – Barcelona, Valencia, Granada, Seville, Salamanca, Lisbon, Porto …. We all loved Seville and my wife Stacey and I plan to move there as soon as we can ditch the kids.

Other destinations, however, were a little more culture-heavy and we had to balance this carefully with regular Geocaching to keep the children happy.

However, it was in Santiago de Compostela that we hit pay dirt. For the first time we found a large cache – about the size of a big jam jar, snazzily decorated with the initials of the people who had originally hidden it, stuck on top in Scrabble tiles.

This was the first one that my boy, Jackson, had found and he was seriously chuffed with himself. 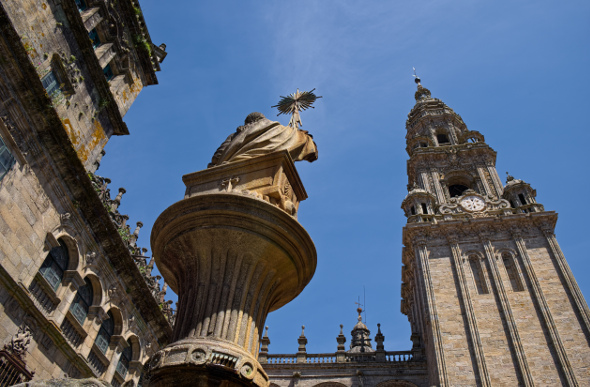 Inside the jar someone had left a little metal scallop shell – the symbol of the Camino, the pilgrimage to the bones of St James that lie in the nearby cathedral. We left two fridge magnets from the Cotswolds that my wife happened to have with her (don't ask me why).

We returned the cache to its original place and left it just as we'd found it. If a cache is interfered with, it's deemed to have been "muggled" and this is severely frowned upon by the Geochaching community.

Whether this secret new world we'd joined extended to punishment for wrongdoers was not something I was prepared to find out.

Now We Are Hardened Geocachers

It's safe to say that the Jolys are now hardened Geocachers.

The moment we returned to the Cotswolds, we checked out Cheltenham and Cleeve Hill behind our farm for caches. There were loads. We are now planning to hide our own one near Belas Knap, the 6,000-year-old Neolithic burial mound where I walk my dogs every day.

If you're planning a family holiday this summer, no matter how near of far from home, take my advice – buy a scooter and download the Geocache app. You'll be like jamón Iberico in clover.

The Geocaching app (geocaching.com) is free and available for iOS devices, as well as Android and Microsoft. The premium package costs A$60 per year or A$18 for three months, including premium-only caches, advanced mapping, offline geocaching, and custom searches.

Visit your local Flight Centre store or call 131 600 for more advice and the latest deals on travelling to Spain.

This article was written by Dom Joly from The Independent and was legally licensed through the NewsCred publisher network.

Dom Joly is a columnist for The Independent on Sunday and The Independent. Since he shot to fame with his hidden-camera comedy show Trigger Happy TV, he has made several television series. He has also written several books, including a spoof autobiography and travel tomes.
more articles from this author