Heading into Laos from Thailand, I really didn’t know what to expect. After crossing the border into Houay Xai, a local tuk-tuk driver took me on a tour for the day. I was astonished when he told how village homes are physically supported by leftover mortars from the Vietnam War.

That was just the start of the unusual experiences in Laos.

After a topsy-turvy twelve-hour overnight bus journey (which meant sleeping on huge rice bags so I was able to stretch my legs), I arrived in Luang Prabang. I found this UNESCO Heritage Listed-city to be a lot more peaceful than some cities in Thailand. 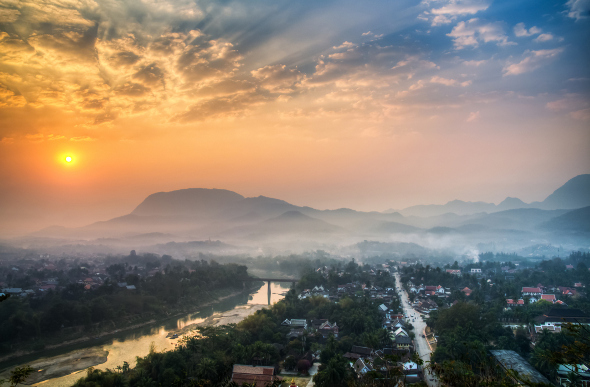 My first impressions indicated Laos was proud of its heritage, as it was scattered with French-style guesthouses and Buddhist temples.

The evening hotspot Utopia, a river deck café restaurant and bar (and yoga studio in the morning) epitomises the relaxed attitude of this northern central city. Curfews are still in place so nothing much is open late here.

After Utopia closes around 11:30pm, the Luang Prabang Bowling Alley is one of the few places still open after midnight; a strange concept to continue the night. While my bowling ability is rather poor, the social aspect was all I craved.

I took a day trip from Luang Prabang to Kuang Si Waterfall, which is full of natural limestone pools. I was impressed and it was impossible not to take a dip, especially when I spotted a rope swing hanging from an outstretched tree.

Keen to get in, I hung on until I had no more grip and splashing down I went. "He who dares," I said to myself. 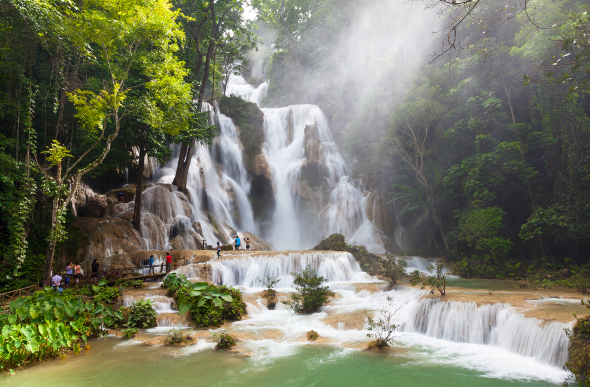 The authentic demeanour Laos still preserves is very much the case with its educational structure. Going local, I decided to visit a primary school and volunteer to teach some English.

Laos isn’t as popular for expat teachers as other parts of South East Asia; however this made no difference to me. My strong northern English accent was entertaining to the class, to say the least.

I began the lesson by pointing to a picture of an apple on the blackboard, asking the class: "what’s that?" Little did I know their reply would also be ‘what’s that’ in an attempted northern English accent! I laughed in disbelief.

Singing the 'Wheels on the Bus Go Round and Round' was the definite highlight; the kids got the idea and sang along to the tune.

On yer bike: Peddle Your Way Around Southeast Asia

Never been? Asia For Newbies

My next destination was Vang Vieng. Known for its famous tubing and parties, I was slightly sceptical. The wild parties lining the riverbanks were infamous on the backpacker circuit, but the Laos government finally cracked down after a number of accidents. Tubing still continues today, albeit without the debauchery. Still, I went and I failed, finding myself constantly unbalanced and in the water. 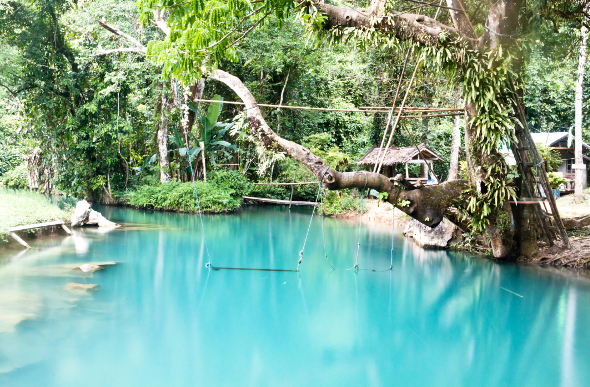 The best kind of holiday blues

A journey next to the Blue Lagoon via tuk-tuk nearly resulted into a head on crash with a cow. I remember the shrieks of terror as we all thought a collision would be certain, but we narrowly missed it, ensuring the cow’s lucky escape. Lagoons are popular with travellers and this was no different as we bathed and enjoyed local refreshments such as Beer Lao and potato chips.

Before I left Laos, passing through its capital, Vientiane, was more of a necessity rather than a preference – or so I assumed. Still very French themed and nicknamed the ‘mini Paris of Laos’, there is more than meets the eye here. 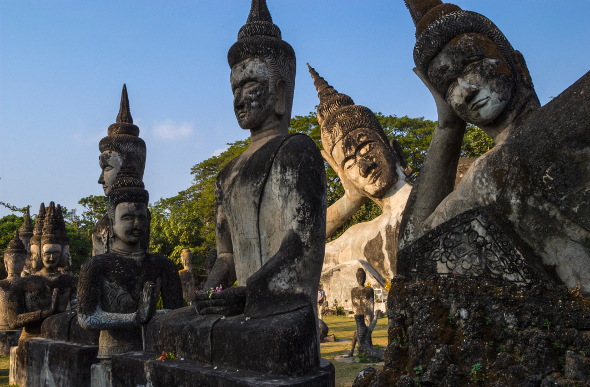 Two hours or so away from the city, I headed to a Buddha Park which blew my mind. Stone carvings of Buddha faces, bodies and other monuments were dotted everywhere, a perfect opportunity for a photo and leisurely stroll.

To be honest, it was a little eerie in its existence and I didn’t know quite what to make of it. The area was fairly isolated but had a similar feeling that a graveyard might create.

Laos had shown me a side to the world that is very contrasting; cool but crazy, interesting and weird. If you want different, Laos gives you that. I’d definitely go back and would recommend it to any traveller roaming South East Asia.

Visit your local Flight Centre store or call 131 600 for more advice and the latest deals on travelling to Laos.

Tommy is a British freelance travel writer who has been travelling since 2011. He lives in Melbourne but his favourite countries are Ecuador, Colombia, Thailand, Philippines and Fiji. Aside from travel, he loves football, hot yoga, whiskey, rainforests and scuba diving.
more articles from this author