Stitching together a photogenic slideshow of Americana in all its flamboyant variety, one of my long-time favourite road trips involves traversing the coastal highway flanking the Gulf Coast and Caribbean Sea. It’s a sightseeing head-swirl of flamboyant Florida, the 'Sunshine State'.

Heading east from New Orleans, after three hours, the bone-white sands of Pensacola’s picture-perfect coastline will shuffle into view. Pensacola town features a gorgeous historic district – like a movie-set teleported from Little House on the Prairie.

For a spoonful of quirkiness, I popped into the TT Wentworth Jr museum which houses an eclectic collection of oddities, including a mummified cat. 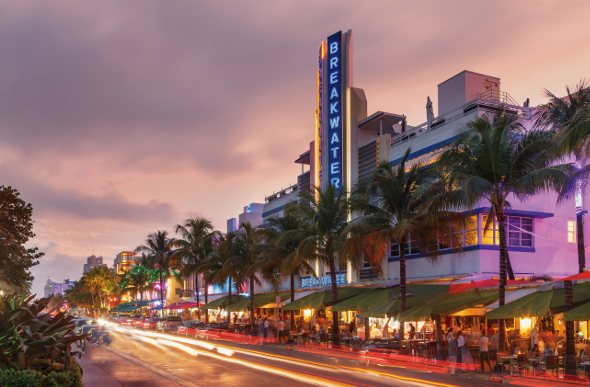 By night, Miami Beach's Ocean Drive is a neon strip of never-ending entertainment

If you want to check out some of Uncle Sam’s mighty boy toys, the National Naval Aviation Museum is a mammoth muscle flex of military might, with 150 resplendently restored aircraft showcased. I half expected all of them to roar into life in the spotlessly presented hangers.

The World War II collection features some Japanese kamikaze aircraft that were shot down. The IMAX theatre delivers a visually exhilirating documentary, The Magic of Flight, evocatively narrated by Tom Selleck. Surprisingly, this stellar museum is free to visit.

Another nearby draw is Fort Pickens, a 181-year-old fortress that once held a legendary prisoner of war: Geronimo.

When you’ve had your fill of the cultural offerings, you’ll be gagging to reward yourself with some quality beach time on Santa Rosa Island.

Completely encircled by the gleaming turquoise waters of the Gulf of Mexico, this generous-sized sandy island juts out into the ocean, linked to the mainland by a seven-kilometre-long road-bridge. It’s feted beach status is well-deserved – no wonder those notorious Spring Breakers swoop on Pensacola’s sandy expanse in hordes.

Further down the Gulf coastline, the glittering waters, gleaming seashells and ivory-hued sand of Clearwater Beach, Siesta Key and Sanibel Island are all radiant and highly recommended beach-break settings. Thankfully, these succulent seaside spots aren’t yet on the mass-adolescence target list of the Spring Break invasion. 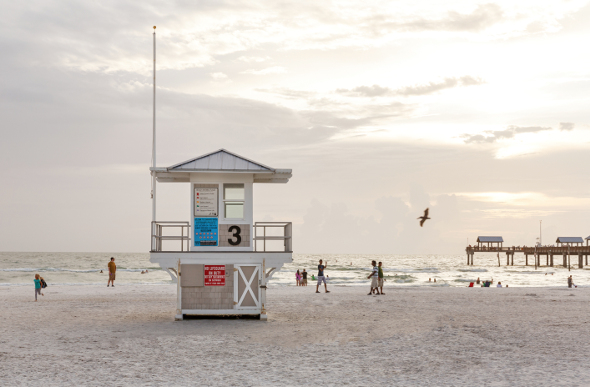 For an pinch-yourself encounter with local wildlife, try your hand at swimming with manatees. Crisp mornings in winter is when Florida’s manatees are out in full force in the Crystal River, the sweet spot of Citrus County.

I ventured into the river on a manatee snorkelling safari, greeted by 500 of these graceful giants at the fresh start of day.

Next on the hit list, something very unlike the benign and docile manatees with their wide goofy grins – is a spot of alligator spotting.

It’s exhilirating fun fizzing along the sprawling wetlands of Everglades National Park on an airboat. There’s apparently more than 200,000 gators mooching about in these waters, so you’ll spot plenty of them.

I’d hoped that with a helping hand from Lady Luck I’d catch a glimpse of a Florida panther – but highly endangered and just as elusive, it wasn’t to be. 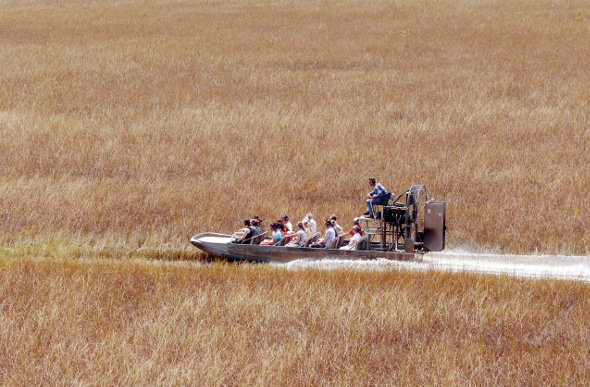 Considering it’s the ‘theme park capital of the world’, the thrills, spills and theatrics of Orlando can easily be incorporated into this journey – but instead I made a beeline for Miami’s bright lights and seductive  spoils.

Sun-drenched and mop-topped in swaying palms, Miami’s alluring draws start with South Beach, an eye-candy headrush and art-deco-encrusted pleasure chest I gorged on like a camera-toting gannet.

Before hitting the white sands and foaming surf (the premium playground for flaunting your exquistely sculpted physique), there are three streets you should walk along, from top to toe: Washington Avenue, Collins Avenue and Ocean Drive.

They’re home the bulk of South Beach’s 800-plus art deco structures, cherrily accessorised in pale pastels and splashed in neon.

A great stop is the 11th Street Diner, an original art-deco dining car, where you’ll enjoy settling into a red leather booth for some hearty southern fried chicken. 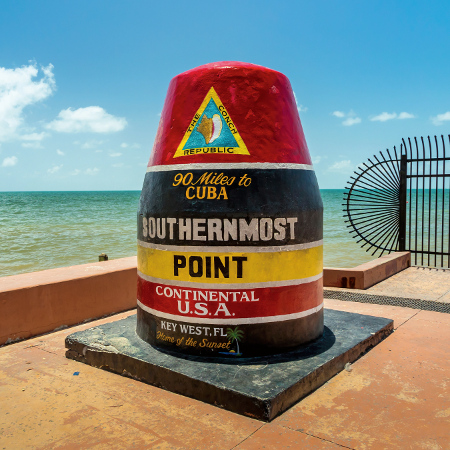 Key West is as far south as you can get

Final stop on your surf-and-sand road trip has to be Key West, via the Overseas Highway. Forty-two bridges stitch the Florida Keys together, but it’s sassy Key West that will steal your heart for its all-encompassing story-book prettiness.

Love a night out? Nothing But Good Problems To Miami Nightlife 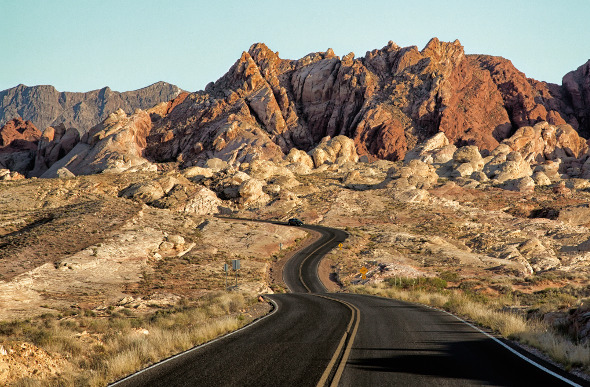 Road-tripping through Nevada's Valley of Fire

Traverse California, Nevada and Arizona on a 3,307-kilometre road romp. On the round-trip route from LA, head first to Palm Springs, Phoenix and the Grand Canyon, before taking in the Las Vegas Strip, Death Valley and Yosemite National Park.

City-break in San Francisco before heading back down to LA, on the storied Pacific Coast Highway, taking in Monterey, Carmel, and Santa Barbara.

Grab your Akubra and blaze a trail through the Lone Star State. This 1,374-kilometre route starts in Dallas, before heading to Austin, the ‘Live Music Capital of the World’.

Then it’s on to Houston for the slew of museums. Remember the Alamo? Hot-foot it to historic San Antonio, and then Fort Worth, where a visit to Billy Bob’s Texas, the world’s largest honky-tonk venue, is a must-visit.

Visit your local Flight Centre store or call 131 600 for more advice and the latest deals on travelling to Florida.

Ever since he memorised the Air New Zealand domestic timetable, at the age of 10, Mike Yardley has been travel junkie. After 20 years as an award-winning New Zealand talk radio host, in 2012, Mike embarked on a career change into travel media. He is now a full-time travel writer and correspondent for a variety of outlets in print, digital and on radio.
more articles from this author