From centuries-old traditions and landmarks to transport, accommodation, shopping and more, the following fun facts are proof positive that the rich history and modern goings-on of the UK’s vibrant capital city are anything but trivial. 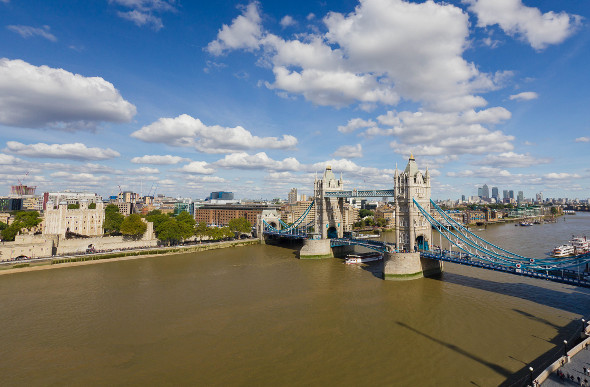 The Tower of London and Tower Bridge. Captured by Flight Centre's Olivia Mair

The Ceremony of the Keys takes place every night at the Tower of London at exactly 21:53
A visit to the historic Tower of London (with its resident yeomen warders, or ‘beefeaters’, as they’re known) is a must, but not everyone sticks around long enough to witness the Ceremony of the Keys. This ancient act has taken place every night, without fail, dating back 700 years and is the traditional locking up of the tower. Have to keep those traditions alive and those crown jewels safe, after all! The ritual takes place promptly at 21:53 every night and concludes at 22:05. Tickets are free, but you do have to apply for them in advance.

London boasts the UK’s first urban cable car
Introduced in 2012, Emirates Air Line, the city’s only cable-car experience, travels over the Thames River, connecting Greenwich Peninsula and the Royal Docks. During the scenic one-way trip, which lasts about 10 minutes, you’ll enjoy spectacular bird’s-eye views of the famed river and the surrounding city. The cable car accommodates as many as 10 passengers, so bring some mates to share a memorable ride!

The British drink 165 million cups of tea daily!
According to the United Kingdom Tea Council, that equates to 60.2 billion cups per year! Clearly you can’t beat ’em, so join ’em and take advantage of one of the many stunning afternoon teas served in hotels and tea salons across the city. Be a Brit for the day with the traditional pot of tea, scones with clotted cream and jam, finger sandwiches and delicate petits fours. For three of the best that London has to offer, visit The Tea Guild’s award winners for Top Afternoon Tea in the past three years: Claridge’s (2011), The Langham (2012) and The Goring Hotel (2013).

2014 will see the introduction of London’s super-yacht hotel
Whether you’re looking for upmarket accommodation or just a unique floating landmark to tick off your must-see itinerary, the Sunborn London super-yacht hotel, set to open this year, promises to grab your attention. Boasting a waterfront location at the western end of the Royal Victoria Dock, this buoyant hotel will feature 138 guest rooms, a bar and lounge, a fine-dining restaurant, banquet facilities and more. And while you’re here, go from sea to sky – the aforementioned Emirates Air Line cable car is nearby.

Today, Harrods still draws the crowds, welcoming a whopping 15 million visitors a year. You can easily and happily spend a day browsing (or, better yet, buying) in this London institution, amid its high-fashion collections, tempting food halls, homewares department, toy and pet kingdoms, furniture showroom, and wealth of restaurants, bars and cafes – all under one roof!

And if you just can’t get enough of London shopping, be sure to take in some retail therapy at London’s other top shops, including Fortnum & Mason, Harvey Nichols, Selfridges and Liberty.