Venice – Across The Lagoon In The Garden City Of Marghera

Venice – Across The Lagoon In The Garden City Of Marghera

As well as the Biennale of Art (on until November 22), there’s a new event for visitors to Venice to check out this summer – Aquae Venezia 2015, a spin-off of the Milan World Expo, taking place across the lagoon in the industrial port of Marghera on the mainland (until October 31).

From Piazzale Roma, Venice’s seething transport hub, the No.6 bus takes just 10 minutes to Aquae’s immense metallic pavilion, where the theme of the show is Feeding the Planet. Covering ecology, environment, agriculture and industry, it is full of futuristic, interactive stands and snack bars, but admission is horribly over-priced at €22 ($A32.50).

Still, it has brought attention to Marghera itself, a leafy mainland suburb of La Serenissima that houses a tight-knit community of Venetians who left the island part of the city because of soaring rents. Most residents commute each day to work in Venice’s restaurants, bars and hotels.

This place is more Venetian than Venice

Marghera is more genuinely Venetian than Venice itself, but without a tourist in sight, and it is worth a day trip for those who want a change from the famous sights. 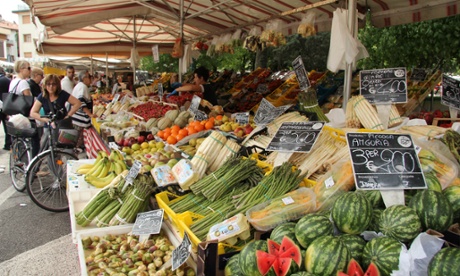 The bus arrives at Piazza Mercato, a wide tree-lined boulevard which is crammed with stalls of the daily food market. Prices are half of those in Venice. There are no grand palazzi; instead there are comfortable houses with spacious gardens.

Marghera, and the Port of Venice, was built just after the first world war. It was conceived as a utopian garden city for workers, following the philosophy of Sir Ebenezer Howard, the town planning guru behind Welwyn Garden City.

All the Margarini I talked to insisted they were happier here than in the city on the water where most of them were born.

You can't say it but you can eat it. Eat Something You Can’t Pronounce In Venice

Live jazz in the evenings

Accompanying me is Giacomo Cosua, a young Venetian photographer and founder of positive-magazine.com, who shows me around and tells me how, when looking for a space for a studio, coming out to Marghera was the only possibility as everything in Venice is far too expensive. 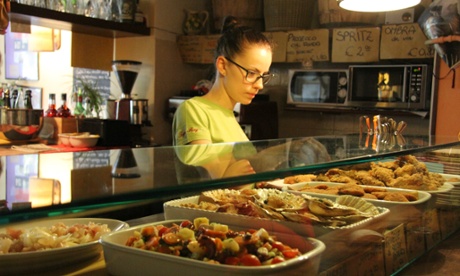 Walking along a leafy avenue, I discover the buzzing Osteria al Diplomatico (Via della Sortita 17), which is more of a traditional Venetian bacaro (wine bar) than those on the canals of my local neighbourhood of Cannaregio back in La Serenissima.

Waiting for the evening’s live jazz concert, the DJ plays Pitura Freska’s anthem to Marghera envisioning a city where factories are replaced by allotments. The band’s provocative mix of reggae and ska songs sung in Venetian dialect have transformed them into local folk heroes.

Founder member Marco Forieri tells me: ‘‘People in Marghera have always been very open to culture and music. The concert scene is very lively compared with Venice, with everything from top jazz artists to Jamaican reggae bands and all-night techno raves.”

Which would definitely make a change from the usual itinerary of St Marks, the Rialto and the Doge’s palace.

This article was written by John Brunton from The Guardian and was legally licensed through the NewsCred publisher network.

John Brunton is a regular contributor to The Guardian, writing and taking photographs on travel, food and wine. Based in Paris and Venice, as well as travelling regularly in South East Asia he blogs at thewinetattoo.com and posts on Twitter @thewinetattoo
more articles from this author