"Ladies and gentleman, start your engines!"

So begins one of the world's most iconic motor races; the inimitable Indy 500 in the Midwestern American city of Indianapolis.

When the flag drops on the 2013 race at the Indianapolis Motor Speedway – known almost universally by its nickname The Brickyard – it will do so against the backdrop of more than 300,000 cheering spectators at what is one of the highest-capacity sports venues in the world. 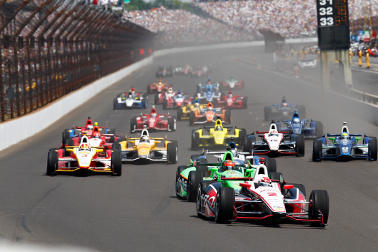 Held amidst the pageantry of America's Memorial Day weekend - May 25 to May 27 - the Indy 500 regularly attracts race enthusiasts and sports aficionados from across the globe.

Morgan Greenlea, communications manager for the city's official tourism website Visit Indy, says it's a combination of history, tradition and the sheer thrill of watching 33 of the world's fastest racing car drivers compete which lures so many spectators to Indianapolis each year.

"For the drivers, this is the biggest and most important race of the year," she says.

"The race is intense - drivers go around 220 miles (350 kilometres) per hour banking on big turns, hoping for no wrecks and praying for quick pit stops. It's an incredible spectator sport."

"It's the tradition, speed and facility that make it so special," he adds.

Today's finish line features the so-called Yard of Bricks – a distinctive reminder of The Brickyard's humble beginnings as a circuit now designated a National Historic Landmark.

The build-up to race day is immense, as the city's streets teem with revellers eager to partake in the festivities.

"May in Indianapolis is a huge holiday, with 500 related events taking place throughout the entire month," Greenlea explains.

"The 500 Festival Parade – one of the nation's premier parades - takes place on the Saturday prior to race day; packed with unique floats, celebrities and all of the race car drivers in their starting grid positions."

There are also classic car shows, Kids Day, a range of community activities and a spine-tingling rendition of "Back Home in Indiana" to kick-start the race itself.

Indianapolis is the 12th-largest city in the United States and befitting one of America's most prominent cities, there's plenty to see and do in this vibrant Midwest hub.

The awe-inspiring Soldiers' and Sailors' Monument on Monument Circle towers over the heart of the downtown city centre, soaring just six metres shorter than New York's renowned Statue of Liberty. 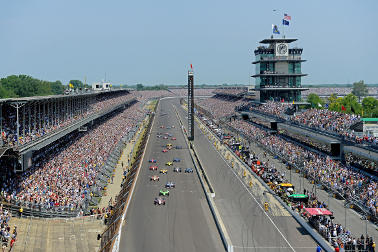 Completed in 1901, the statue's observation deck affords impressive views over the shimmering steel and glass skyscrapers of the modern Indianapolis streetscape.

On the western fringe of the city is the expansive White River State Park; an urban oasis which radiates out from the historic Indiana Central Canal, upon the banks of which stand several notable museums – including the Indiana State Museum.

But for one month a year it is motor racing which reigns supreme and for Australian fans, the presence of Aussie contenders Ryan Briscoe and Will Power adds an element of intrigue.

The experienced pair will no doubt hope to partake in one of the Indy 500's most beloved traditions – the swigging of a bottle of milk by the race winner.

It's been an annual tradition ever since Louis Meyer first downed a glass of buttermilk upon claiming his second win in 1933, although these days winners often simply drench themselves in joyous celebration of triumphing in such an illustrious event.

Well might they, for the Indy 500 is part of motor racing's prestigious Triple Crown, with Formula One's famous Monaco Grand Prix and the 24 Hours of Le Mans endurance event the other two.

However, for Indy Car fans, only one race truly matters. Come midday on May 26, all eyes will be fixed firmly on Indianapolis.