Get Adventurous In Las Vegas: A Thrillseeker's Guide

Get Adventurous In Las Vegas: A Thrillseeker's Guide

Las Vegas likes to do things on a big scale: big casinos, big shows, big buffets. So it’s no surprise that you can find big adventures here, too – both on and off the famous Las Vegas Strip. It’s time to up the ante on your Sin City holiday with these extreme escapades. 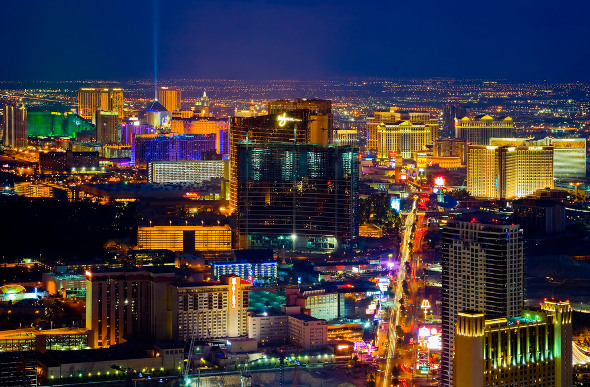 To get that adrenaline pumping, make your way along the Strip to the Stratosphere Casino, Hotel and Tower. Here you’ll find SkyJump (an attraction much like a vertical zipline), which is one of the highest such jumps in the world. Take the nearly 261-metre plunge from the 108th floor of the tower and descend towards the Strip at breathtaking speeds before SkyJump slows you down for a safe-and-sound landing.

Do you get a thrill just watching? Take in the jumpers from a number of vantage points: from the SkyJump landing area; on the big TV screen in the SkyJump store, or from inside the 108th floor. SkyJump is open seven days a week and taking the big leap costs US$119.99.

Sail Over The Strip

If you can’t get enough of this high-flying fun, make your next stop the VooDoo ZipLine – newly opened in May 2014. This exhilarating attraction (more like a super-fast chairlift than a traditional zipline) will have you (and a friend, if you wish) soaring over the Strip between the two towers of the Rio Las Vegas hotel and casino at speeds of more than 50 kilometres per hour. During the ride, which lasts just over a minute, you can enjoy heady Las Vegas views. The VooDoo ZipLine runs from noon to midnight seven days a week; tickets cost from US$24.99. 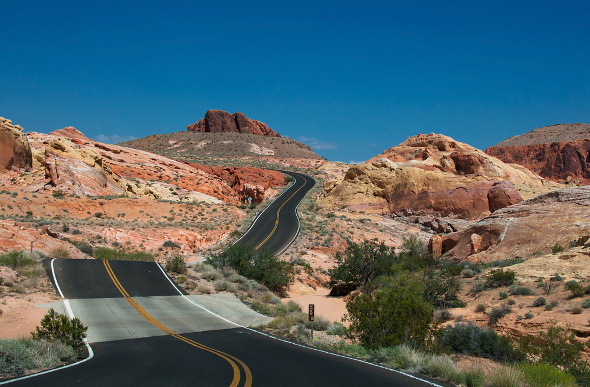 Hit the road to the Valley Of Fire

Venture Into The Valley Of Fire

If you prefer to keep your feet firmly planted on the ground but still crave some adventure, take a hike through the stunning Valley of Fire – the oldest and largest state park in Nevada. Located about 80 kilometres northeast of Las Vegas and open year-round, the park boasts day hikes of varying distances to suit all fitness levels.

On your hike, you’ll encounter the impressive and vibrant red sandstone formations from which the park gets its name. You’ll also see petroglyphs (ancient rock carvings and drawings), several species of cactus and more. The picturesque Arch Rock trail is just over three kilometres long and affords spectacular views of the rock sculptures, including its namesake and nearby Piano Rock.

Other highlights along the trails include Atlatl Rock, Mouse’s Tank - a natural water basin - and Rainbow Vista with its vista of multi-coloured sandstone. Also look out for the Seven Sisters rock formations and the richly coloured sandstone of Fire Canyon Arch.

For some water-based excitement and more magnificent scenery, this time head southeast from the Strip for around 40 kilometres. Here, you can take a cruise on Lake Mead – one of the Western Hemisphere’s largest man-made lakes. Five marinas dot the lake, with numerous cruise operators available.

Once afloat, let your boat do the hard yards while you take in the lake’s pretty surrounding islands and coves, jagged cliffs and sandy beaches. From Boulder Basin, view the rugged River Mountains and Muddy Mountains. If you can, set sail in time for sunset as the view, with the majestic mountains in the background, is not to be missed. And last but not least, historic Hoover Dam is a must-see on any Lake Mead cruise. This awe-inspiring dam, which confines the lake, is a major tourist attraction in its own right.

Finally, for some hair-raising off-road exploits, hire a dune buggy to explore the area’s unique desert landscape on your own or on a guided tour. Tackle the Nellis Dunes (mere minutes from the Strip), speed your way through Amargosa Valley or blaze your own trail through the Valley of Fire. With a number of dune-buggy operators you can choose from one, two or four-seater all-terrain vehicles (ATVs), and there are trails to suit all levels.