Get Back to Nature in Alaska

Get Back to Nature in Alaska

If your idea of the ultimate escape is settling into a cabin in the wilderness against the sound of a crackling fire and the glow of the midnight sun, look no further than Alaska. The Last Frontier is more than merely a gateway to the Great White North, claiming rank as the largest of the United States where natural beauty knows no bounds. This irresistible icebox is utopia for the wild at heart seeking a holiday well beyond the city limits - with endless spans of glaciers, fjords and pristine interiors, Alaska works tirelessly to keep your attention and adrenaline sustained. Whether you find yourself in Alaska on a brief cruise stopover or an extensive expedition, make some time in your itinerary for these essential Alaskan experiences. 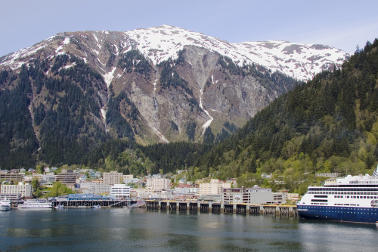 Mountaineering in Denali National Park
Roughly halfway between Anchorage and Fairbanks, Denali National Park is an untamed land of forest, tundra and rugged mountainside. Home to North America's tallest peak, the ominous Mount McKinley, Denali is one of the best sites in Alaska to engage in a little leisurely mountain climbing. That is, if your idea of leisure includes hardcore wilderness survival, dizzying altitudes and overcoming ice walls. Mountaineering in the park is not for the faint of heart, with challenging terrain that is guaranteed to test your mental and physical fortitude. Taking things a little easier, enjoy a guided sled dog journey, roaring “mush!” along the way before dropping by the kennels to learn about the important work these furry park rangers do.

Kayaking in the Kenai Peninsula
Known as "Alaska's Playground", the Kenai Peninsula on the state's southern coast is most easily accessed from the city of Anchorage. There are endless opportunities for kayaking in the peninsula, from big-tide seafaring in Homer to the calmer waters of Kenai Lake. Kayaking is also one of the best ways to take in the grand Kenai Fjords National Park, where independent kayakers are able to charter their own vessels and amateur paddlers can join forces with guides who are experienced in navigating the glacial, mirror-like waters. If dry land is more your scene, some 50 different hiking trails across the peninsula will take you through alpine ridges, ice fields and lake districts covering the entire spectrum of ability.

Wildlife spotting in Juneau
The compact and charming capital Juneau sits snugly between two mountains and a channel, making it a prime wilderness gateway as well as a popular port city. The krill-filled waters surrounding Juneau attract pods of humpback whales and orcas who give quite the performance as they feed and frolic just offshore. The wildlife wonders don't stop there, with families of black bears and brown bears taking advantage of the plentiful salmon streams and peacefully foraging through the city-skirting forests. Unfortunately, you probably won't be able to spot moose in Juneau - they aren't shy around Anchorage though!

Hiking in the Glacier Bay National Park
The World Heritage listed Glacier Bay National Park and Preserve has the power to take you back to the ice age, where rivers carve through mountains and seascapes relentlessly try to outdo the landscapes. Deep fjords and snow-capped ranges dominate the park, which changes day by day as glaciers stir, ice breaks and seasons shift. An easy trip by air from Juneau, this natural retreat is a place of inspiration and serenity, with several hiking trails winding their way through the impressive south Alaskan back country. Breathe in the alpine air along the easy one-and-a-half kilometre Forest Loop Trail or take half a day to explore the rugged Bartlett River Trail.

Fishing on Kodiak Island
Kodiak Island and its main town of the same name are Alaska, real and raw. Populated by hardworking locals and the large and in-charge Alaskan grizzlies (aka Kodiak bears), Kodiak Island is a short trip from mainland Alaska, with multiple daily flights from Anchorage. The so-called Emerald Isle of Alaska is an angler's paradise, with fishing driving the local economy. Dedicated fishing camps, wilderness lodges, charter boat tours and even a spot of roadside fly-in stream fishing will have you catching your fair share of trout, salmon and halibut in no time – just be prepared to "kiss the fish" after your first catch.