Ghent: A City Of Enticement

Ghent: A City Of Enticement

Breakfast in Britain, elevenses en route and lunch in a close approximation to heaven: that is the prospect offered by a trip to Ghent.

This beautiful and accessible Flemish city combines the best of the past with a vibrant present, making it the ideal destination for the near future. 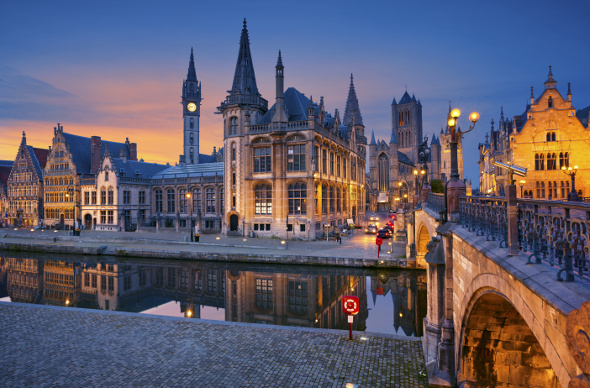 This ancient city is discovering a new present

The Flanders city is just half an hour by rail from the Eurostar terminus at Brussels Midi. Direct trains from the Belgian capital’s airport take an hour.

By car, Ghent is under two hours on the motorway from Calais. So it’s an easy matter to reach the Great Butchers’ Hall, possibly the most handsome meat market in Europe. Outside, that small stall with a long queue is Frituur Filip. It dispenses fresh frites with the greatest winter warmer, stoverij, a meat stew slow-cooked in brown beer.

Then make your way to a dramatic cafe known as Max, where century-old griddles turn out waffles by the dozen from 2pm each day. Don’t smother these Flemish treats with fancy toppings; a swish of melted butter and a dusting of icing sugar is all you need.

How to top that? With the bittersweet taste of the tropics, in the shape of the coffee bean. Flanders is a centre of excellence for trading in the exquisite commodity, and Ghent’s part in the business developed in unusual circumstances. 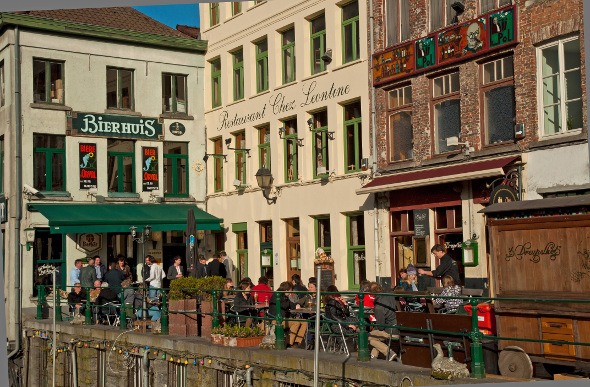 The perfect spot to pause for a coffee - or something colder

When the city hosted the World Fair in 1913, a Brazilian trader brought the flavours of South America to the event. When it ended, an enterprising local businesswoman bought up the coffee supplies and equipment and created a coffee emporium: Sao Paulo. It is still trading today on Koestraat, selling beans from Ethiopia and elsewhere.

But if you prefer to breathe in the aroma of this fabulous shop, just invest a couple of euros in a cappuccino.

A City Rediscovers Itself

By now you might want to take a couple of hours out from the important and rewarding business of eating and drinking, and consume some culture at Ghent’s pair of premier-league art museums.

They stand opposite each other in the vast green haven known as Citadelpark. At MSK, the Museum of Fine Arts, the repertoire ranges from a 15th century depiction of a peasant’s wedding by the artist Brueghel to Magritte’s Le Balcon de Manet (briefly on loan).

Picking up the cultural baton around about 1950 is SMAK, the contemporary art museum which includes works by Francis Bacon and Andy Warhol.

The city’s most magnificent work of art occupies a chapel in a corner of the cathedral. People flock here to see the Adoration of the Mystic Lamb, created by the van Eyck brothers in the early 15th century. The series of panels seem almost luminous in their intensity, and create an extraordinary connection with the past. 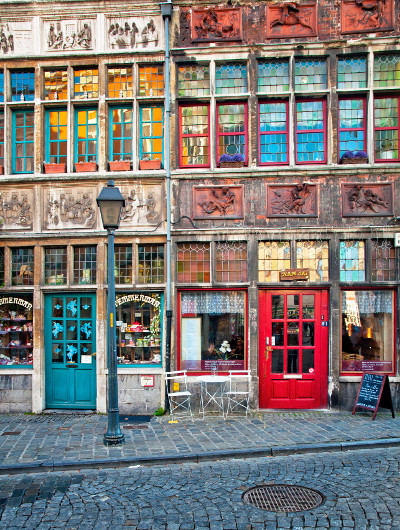 The charm of the old town

It is currently enjoying some tender loving care. “Restoration will take four years,” Canon Ludo Collin says. “Then it will be magnificent.”

To be propelled from sublime spirituality into another era, walk through the door of The House of Eliott - perhaps the most theatrical of Ghent’s exuberant restaurants. The name and the decor are based on a 1990s BBC series about a pair of dressmaking sisters in the 1920s.

The locals, whose discerning appetites are the subject of intense competition by restaurateurs, appreciate the dishes as much as the surroundings.

“We are starting to rediscover our own city,” says Annelies Rutten, a local journalist who believes Ghent has changed dramatically for the better over the past few years. “Ghent is like a quality label so everybody is very happy to live here.”

Visit your local Flight Centre store or call 131 600 for more advice and the latest deals on travelling to Ghent.

Simon Calder is the Senior Travel Editor for The Independent, writing a weekly column as well as articles and features. He also writes for The Evening Standard, High Life (BA’s inflight magazine) as well as many other publications.
more articles from this author