On final approach to Christchurch from Australia, they’re the speed bumps of the sky. Strutting imperiously, the jagged Southern Alps are like a topographical greeting party, providing travellers with a turbulent, ill-tempered welcome on descent.

Stand on any beach around Christchurch and those fine grey sands between your toes began life on those peaks. They are the fragments of ancient greywacke rock, eroded from the Southern Alps and washed down the wide rivers that run across the Canterbury Plains before reaching the Pacific coast. 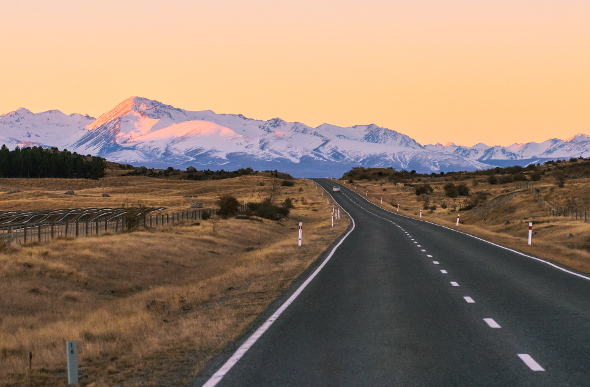 The long road ahead: imposing mountains and rugged scenery abound on a South Island road trip

Pulling out of Christchurch on a crisp, clear morning, I powered across Canterbury’s pastoral patchwork, on State Highway 73, as the high country shuffled into view.

Within 90 minutes of leaving the city, the chequerboard expanse of cultivated fields waving with wheat, and pastures thronging with plump dairy cows and frolicking sheep, suddenly gives way to alpine awe.

Threading through the high country, I rendezvous with the upper reaches of the Waimakariri River, one of the great braided rivers that created the plains, as a trusty transporter of eroded rock and alluvial soil tumbling down from the mountains.

This luminous turquoise river snakes between shingle banks ablaze with golden gorse and broom. Steadily climbing through the Craigieburn Range and the Bealey Valley, the mountain hamlet of Arthur’s Pass, huddled between soaring peaks, thickly-clad in beech forest and spritzed with gushing waterfalls, heralds my arrival into alpine wonderland. 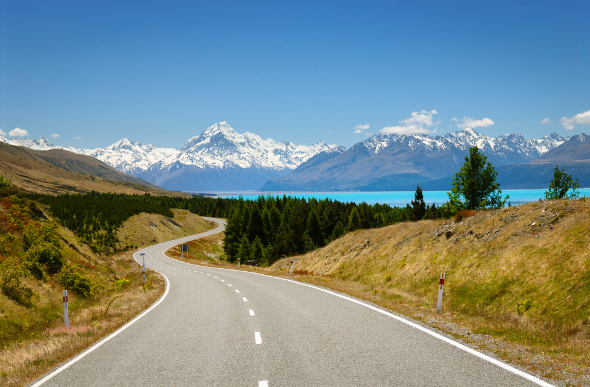 I take a timely coffee-stop to ponder the sudden plunge in temperatures and interact with the cheeky kea parrots while marvelling at the mist-swirling peaks and gnarly alpine cottages hunkering beside the highway.

The majesty of the Southern Alps hits full-tilt sensory overload as you reach the highway summit of Otira, where I gasp in sweet surrender at the snow-cloaked mountains carpeted in ancient podocarp forest.

‘Welcome to the West Coast’, the roadside sign cheerfully exclaims, as I dart westward down the twisting highway, shadowing the Grey River, to its namesake town of Greymouth.

Not a likely contender in the urban eye-candy stakes, Grey, as the locals call it, compensates for its aesthetic shortcomings with hearty hospitality. Check out some of the landmark watering holes like Revingtons or take a tour of the pioneering Monteith’s Brewery.

From Greymouth, I zip 70 kilometres north, to one of New Zealand’s most spectacular natural rock-stars, Punakaiki’s Pancake Rocks. This remarkable geological formation, which does indeed resemble a gluttonous stack of pancakes, turns on a spectacle to eclipse Las Vegas’ Bellagio Fountain, when the tide is high.

Nature’s riot of stone and sea is thunderous, with the ocean surging into the caverns and booming ferociously through the blowholes. 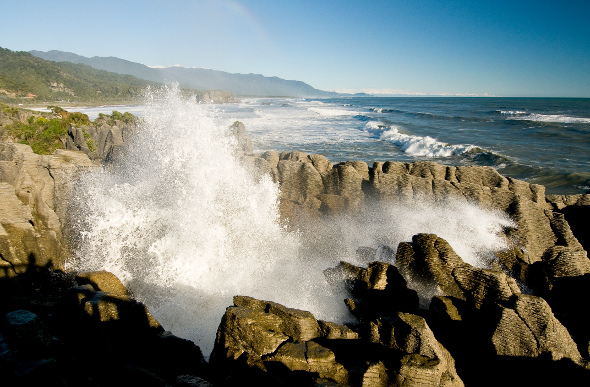 The Forest That Time Forgot

I take a 30-minute easy-going stroll on the Truman Track, which weaves its way through pristine native forest, leading right to the edge of the Tasman Sea coastline, with a stunning seascape. Nestled at the base of Paparoa National Park, it’s hiking heaven with a forest groaning with ancient rimu, beech and matai, and striking nikau palms.

Heading south along the West Coast Highway (SH6), the scenic-metre gets close to bursting, as you’re wedged between the pounding Tasman surf and the towering Southern Alps. Pull over at Knights Point where the coastal panorama is celestial.

Essential stops include Ross, a cute-as-a-button settlement, with a storied past steeped in gold mining. The historic village features an authentic clutch of colonial buildings, including the old Ross jail, bank and miners’ cottages.

Call into Hokitika for its cluster of artisan studios, specialising in pounamu (jade) sculpture and carving, gold and glass-blowing art.

Shantytown is a re-created 1860s gold-mining town, complete with pub and post office. There’s a spoil of interactive experiences to try your hand at, including gold panning, sawmilling and I treated my inner-child to a miniature train ride. 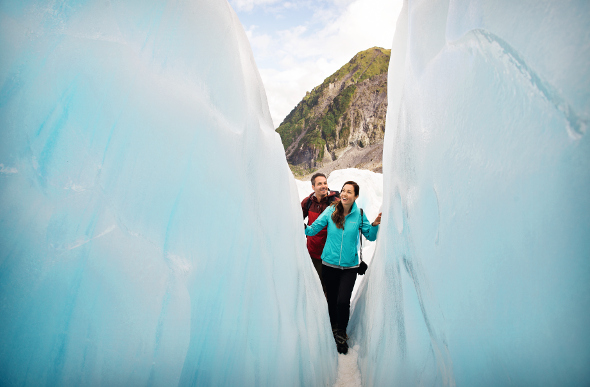 The Fox Glacier is a must-visit

New Zealand enjoys the unique distinction of being the only place on the planet where glaciers slope down to within 20 kilometres of the coastline. In the family of glaciers, the little sister is Fox, located in a steep-sided glacial valley, while its big brother, Franz Josef Glacier, is the real pixel burner, thanks to its serpentine-shaped slithering magnificence.

Both glaciers have been in the grips of the stretch and squeeze machine. I remember as a child, Franz Josef’s toe nearly reached the roadside. Until 2008, the glaciers were growing 70 centimetres a day – now they’re in rapid retreat mode.

Across the road, the dark, inky waters of the bush-clad Lake Matheson deliver absurdly supreme mirror reflections of the snow-topped peaks, with Mount Cook and Mount Tasman the mouth-melters.

From glacier country, tootle south on the Haast Pass highway through more primeval rainforest before dropping down into Central Otago’s golden folds, where the azure lakes, pinot noir and adrenalin-buzz of Wanaka and Queenstown await. 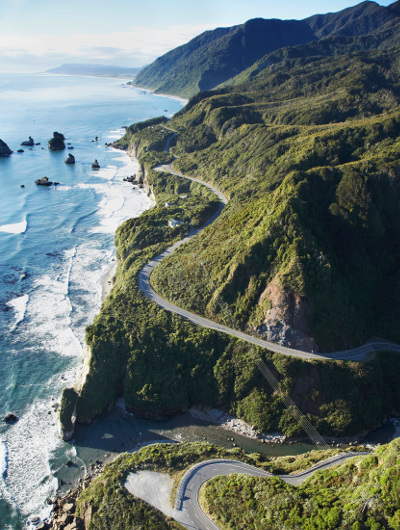 Road tripping the West Coast is an invigorating experience

From Christchurch, take a northerly road romp alongside the glinting Pacific coastline. The rolling vineyards of the Waipara Valley are home to a horde of boutique wineries.

A riveting road trip connects Christchurch to Queenstown, showcasing so many of the South’s winning attributes. Tekapo’s glacier-fed lake is a show-stopper, but so are the heavens at the Dark Sky Reserve, where the twinkling chandelier of constellations seem to be fitted with LEDs.

Linking Queenstown with Dunedin, this blockbuster route threads its way around the dramatic Catlins coast. The wildlife is wondrous, with fur seals, sea lions and penguins parked along its shores.

A powder-keg of rugged natural wonders include lofty lookouts like Nugget Point and singular experiences like Curio Bay, where fossilised tree stumps, more than 170 millions old, are clearly visible on the bay’s rocky shelf. Savour the Catlins – take your time.

Ever since he memorised the Air New Zealand domestic timetable, at the age of 10, Mike Yardley has been travel junkie. After 20 years as an award-winning New Zealand talk radio host, in 2012, Mike embarked on a career change into travel media. He is now a full-time travel writer and correspondent for a variety of outlets in print, digital and on radio.
more articles from this author