Former ABC journalist Michael Turtle grabbed his backpack last year and hit the road on an epic expedition that has taken him through South America and onto Europe. While he normally documents his adventures on his blog, Time Travel Turtle, Michael compiled this report for Flight Centre on his experience in Greece.

It's hot in Greece this time of year. The sun rises early and warms up the country before most people even begin to wake up. By the afternoon, the streets are quiet as most people seek shelter from the heat. But a strange thing has happened here the past few years - in Athens, in smaller cities, and in the rural towns of Greece, the mornings and the evenings have seemed just as calm. 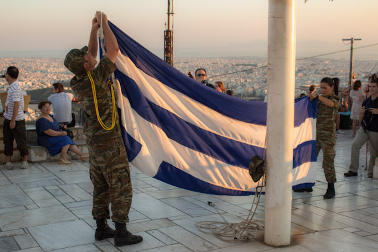 Ever since the economic crisis in Europe hit the country, tourists have been staying away (with the exception of the most popular islands off the east coast, which international visitors don't seem to associate with the troubles originating from Athens).

The consistent negativity in the media has created an impression of uncertainty amongst potential tourists and most have chosen not to risk booking a holiday to Greece. But the irony is that it's actually the best time to visit.

Climbing the steps of the Acropolis is one of the most iconic things you can do to experience the wonders of the ancient world. Like any major tourist attraction in the world, you would expect large crowds. These days, though, you can explore in peace. On the morning I visit - at what should be a prime time - there are no lines to get in, no throngs of tours to push through and no worries about finding an opportunity to take a photo of one of the world's wonders without other people getting in the way.

Restaurants, bars, cafes... they all have space at their tables. The waiters I chat with tell me that numbers are down by about fifty per cent of usual levels. This is the high season for the countries around the Mediterranean Basin but Greece is missing out on its fair share. Italy, Spain and Turkey appear to be the flavours of the year.

The situation is even starker in the smaller towns of the mainland. In one that I visit (to see a unique UNESCO World Heritage site) I am the only person staying at the hotel with the best recommendations. Once, the owner tells me, he would put backpackers on mattresses on the terrace because the region was so full. For me, he discounted the rate without me even asking - just to get some business.

And herein lies the interesting thing for anyone considering a trip to Greece. The economic situation means there is plenty of availability at some of the most beautiful and historically important places in Europe... and the prices are lower than they have been since the Euro was introduced. The Greeks know that they need tourists to help lift them out of their financial predicament and they're willing to do what it takes to bring people back.

With the election of a new government there's a stability in the country - even though the large number of police on the streets of Athens don't let you forget about recent troubles. But the natural beauty, the stunning ruins and the hospitable culture has withstood worse pressures than this. There's no doubt the tourism industry in Greece will survive. Now is the perfect time to help it do that - and grab yourself an easy bargain in the process.