Greece: Highlights Of The Underrated Peloponnese

Greece: Highlights Of The Underrated Peloponnese

The writer Paddy Leigh Fermor is best known in Greece for his exploits in Crete in 1944, when he daringly abducted a German general from right under the Nazis’ noses. But his heart really lay in the Mani – the wild, remote quarter of the Peloponnese – where he lived for half a century until his death in 2011, aged 96.

And now John Humphrys has made a pilgrimage to Kardamyli – Leigh Fermor’s ancient village, mentioned in Homer’s Iliad – for Britain's Radio 4.

Humphrys covers Leigh Fermor’s pre-war walk across Europe at the age of 18 and those wartime heroics in Crete. Clutching a copy of Leigh Fermor’s book — Mani: Travels in the Southern Peloponnese — Humphrys, who has a holiday home in the Peloponnese, then investigates this heart-stirring corner of Greece. 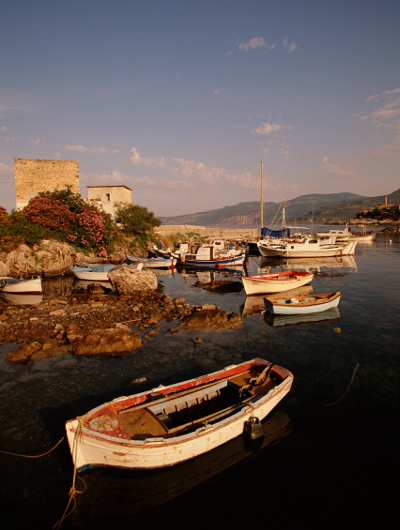 Even in the days of mass Greek tourism, the Mani, the finger of land that points south from Kardamyli, remains largely empty. I drove from my simple seaside hotel – just south of Kardamyli, with its own little beach – all the way down to the tip of the Mani and barely met another soul on the road.

Ancient Mini-Manhattans Were Places Of Refuge

The journey down the western side of the Mani’s rugged spine is dotted with small villages, notable for their Byzantine churches and clusters of stone towers – ancient mini-Manhattans built as refuges against invaders and as protection against local blood feuds. Vathia and Limenio are among the prettiest of them. 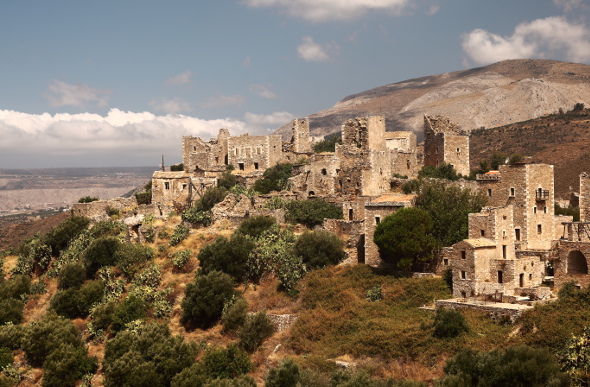 Vathia - a refuge against invaders

But the point of Mani is less architectural than natural, with jagged cliffs falling away on one side of the road, as you look south ahead of you, along the narrowing spit of land, to the humpbacked hills of Cape Matapan. There is no coastal drive in Greece that is as dramatic.

Still, the Mani is only one small chunk of the Peloponnese – the peninsula that has been at the heart of Greek theatre, literature and history for more than 3,000 years. Many of the city states that formed the constituent parts of ancient Greece are in the Peloponnese – and it’s rich in Homeric sites, too.

Heading north into the Peloponnese from the Mani, you pass the Greco-Roman city of Gytheion, with its ancient theatre. Connected to Gytheion by a causeway is the tiny island of Marathonisi, where Paris first made love to Helen of Troy after stealing her from her husband, Menelaus.

When their relationship later turned sour at Troy, a nostalgic Paris tried to stop Helen nagging him by referring to that golden night.

“Let us go to bed and turn to lovemaking,” Paris pleaded, ever the flashy Lothario. “Never before as now has passion enmeshed my senses, not when I took you the first time from Lakedaimon the lovely, and caught you up and carried you away in seafaring vessels and lay with you in the bed of love on the island of Kranae [now Marathonisi].”

“Lakedaimon the lovely” was the ancient Greek name for Sparta – 48 kilometres north of Gytheion. 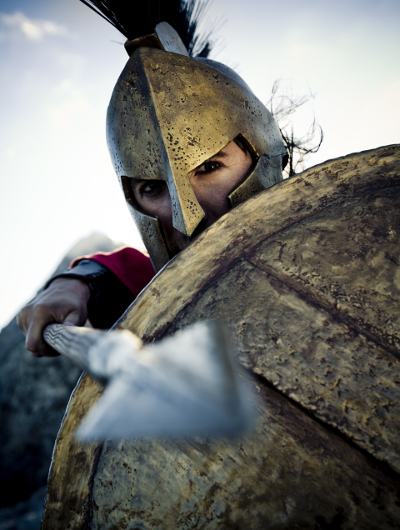 The abiding (and probably deserved) image of Sparta

Spartan cuisine was terrible, too. After a dinner in Sparta, a Sybarite, from pleasure-loving Sybaris, a Greek colony on the instep of Italy’s boot, muttered, “Now I understand why Spartans don’t fear death.”

Head north of Sparta and you are in Arcadia, a wilderness of legendary beauty, celebrated by everyone from Virgil to Tom Stoppard. Arcadia was home to Pan, the goatish god of the wild, who gave his name to our own little boy god, Peter Pan.

On either side of the road to Tripolis, ancient, Arcadian Greece survives largely intact. The cypress and olive trees on the lush, green plain are skirted by mountains dotted with brown scrub, broken here and there to reveal white stone scars between. Every now and then, a modest, red-roofed town does little to take the edge off the rural idyll look.

Greece will shrug off this crisis, too. Greece – Open for Travellers

See the ancient wonders without busting the budget. Explore Athens on a Budget

The Best Of Greece – And Still Strangely Unvisited

Head west from Tripolis for Olympia – the pastoral valley home of the Olympics. Head east from Tripolis towards Athens and you can take in Epidauros’s theatre and the ancient acropolis of Mycenae perched on its crag, dominating the surrounding plain.

During Greece’s boom years – from the 1980s until the sad collapse of the past six years – EU largesse was splurged on the Peloponnese motorway system. So anywhere in the Peloponnese is easy to reach within a day from Athens. 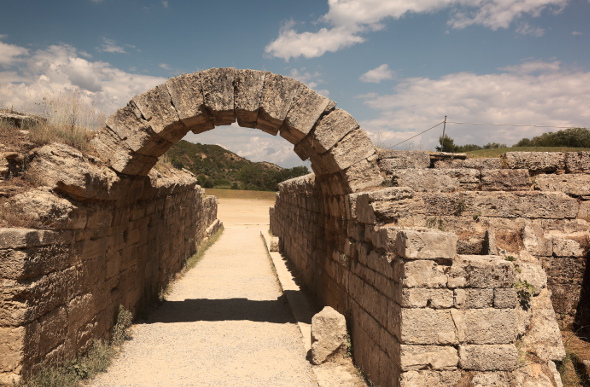 Gate to the first Olympic stadium

But, still, despite the ease of access, the Peloponnese – and its peerless sights – remain strangely unvisited, while the Greek islands are full to bursting. It’s time to make a beeline for Paddy Leigh Fermor’s Greece.

10 Highlights of the Peloponnese

The birthplace of the Olympics doesn’t just include ancient athletic buildings, such as the stadium and gymnasium. Because Olympia was a sacred precinct, it’s blessed, too, with several temples. The greatest is the 5th Century BC Temple of Zeus.

The temple once housed the gold and ivory statue of Zeus, one of the Seven Wonders of the World. It was whipped off to Constantinople in the 5th Century AD, where it was destroyed in a fire.

The legendary home of Agamemnon – the Greek leader in the Trojan War, who fought with his brother, Menelaus, to retrieve Menelaus’s wife, Helen of Troy, from silly, vain Paris. It was here in 1876 that the German archaeologist Heinrich Schliemann claimed to have found Agamemnon’s gold death mask.

The mask turned out to be too old for the Trojan War. Still, as you walk through Mycenae’s 13th Century BC Lion Gate – topped with two lions wrapped around an early Doric column; the oldest coat of arms in the world – it’s hard not to fall in love with the idea that the ancient Greek myths must be true.

Just on the edge of modern Sparta sits ancient Sparta. Its enormous theatre is carved into the side of the hill, with commanding views of the Taygetus mountain range – and the medieval town of Mistra, hoisted on its own peak. Dubbed 'the Byzantine Pompeii', Mistra is now deserted, its castle flanked, on its lower slopes, by a series of palaces and 14th and 15th Century, frescoed churches. 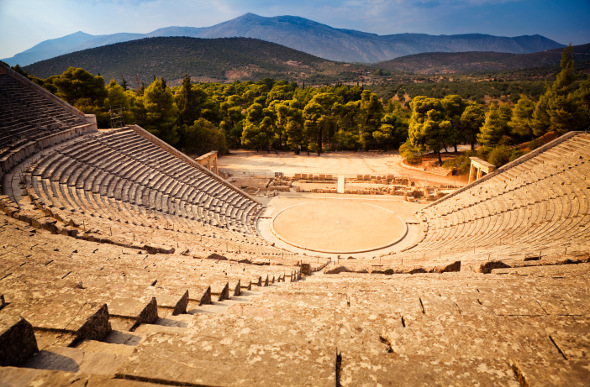 The best ancient theatre in Greece, built in the 4th Century BC and still used for performances of ancient plays today. Even right at the back of its 14,000 seats, you can hear an actor clear his throat.

A lovely Venetian town, with fine military architecture. Dramatically positioned on a rocky peninsula, it’s the perfect base for exploring Mycenae and Epidauros. The quiet, narrow streets are crammed with bars and restaurants, with pretty balconies and shutters. Italy meets Greece.

Paddy Leigh Fermor’s village is strung along a wide stretch of seashore. There is a series of beaches north and south of the town; good seafood restaurants, too.

The Kalamitsi Hotel, right next to Paddy Leigh Fermor’s old house, has its own secluded beach, reached by a curving path through a hanging wood. Try to emulate Leigh Fermor – who used to swim around the tiny islet of Merope every day into his 90s. It was beyond me, aged 43.

This splendid natural harbour has been a tactical hot spot for 3,000 years. Home to Nestor, the oldest Greek leader fighting the Trojans, said to be 110 years old when the war began. Nestor’s Palace at Pylos is the best surviving Mycenaean palace, dating from around 1300BC.

There’s also a vast Turkish-Venetian fortress on the hillside above Pylos’s beach. While you swim, look across Navarino Bay – in the Battle of Navarino here in 1827, the British, French and Russians defeated the Ottoman Empire, easing the way to Greek independence.

Pylos’s main square is the heart of town life, with a mixture of cafes and restaurants in the shade of the trees.

At the northern end of the Mani, with long beaches and idyllic swimming in the bay; they call the calm sea around here 'olive oil water'. As the name suggests, it’s popular with dolphins, too.

The small island in the far east of the Peloponnese is car-free. Bicycles, mopeds and horse‑drawn carriages get you around. It’s ringed with beaches and easily reachable, either from Athens or the Peloponnesian coast.

John Humphrys’s favourite restaurant, just down the hill from his Mani house. His ideal lunch there is mountain greens, potatoes and sea bream – well grilled, of course.

This article was written by Harry Mount from The Daily Telegraph and was legally licensed through the NewsCred publisher network.

Harry Mount is an English author and journalist. His latest book is The King and I - How Elvis Shaped My Life. He writes about politics, buildings and language for newspapers and magazines and is following in the footsteps of Odysseus for his next book.
more articles from this author