A Guided Tour of Chicago

A Guided Tour of Chicago

It's been called "The Jewel of the Midwest," "Chicagoland" and "The Windy City" among other names but whatever you label it, there's no doubt Chicago is one of America's most important cities. Once deprecatingly called "The Second City" in a scathing New Yorker article, these days the moniker is closer to the truth than many New York residents might care to admit. Big, bold Chicago welcomes millions of tourists to its glittering city streets each year and while its downtown hub is undoubtedly The Loop, some of Chicago's best attractions lie further afield in its eclectic inner-city suburbs. So sit back and relax as we take you on a guided tour of some of Chicago's most vibrant neighbourhoods. 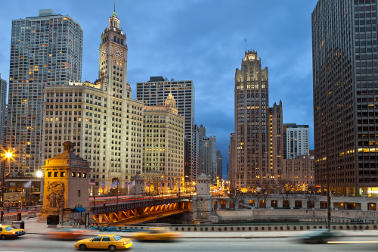 The Loop
The towering, frantically beating heart of the Chicago city centre, The Loop is the second largest commercial business district in the United States after Midtown Manhattan and home to some of the most iconic buildings in the country. Soaring a dizzying 108-storeys above the city, the Willis Tower is America's tallest building and looms over the Chicago city skyline from its vantage point close to the Chicago River. The river is dyed green on Saint Patrick's Day every year as a nod to the role played by Irish migrants in helping to build Chicago. Other notable attractions in The Loop include the legendary Chicago Theatre, the Art Institute of Chicago and the sprawling urban oasis that is Grant Park.

Lake View
Located on the north side of the city from The Loop, Lake View is so named for its expansive views of the neighbouring Lake Michigan shoreline which bounds its eastern fringe. Unofficially divided into the neighbourhoods of Lakeview East, West Lakeview and Wrigleyville, Lake View is perhaps best known as the home of one of world sport's most iconic teams, Major League Baseball's so-called "Loveable Losers," the Chicago Cubs. The Cubs have called the historic Wrigley Field home since 1916, with the 41,000-capacity ballpark famous for its ivy-covered brick outfield wall. The streets surrounding Wrigleyville give the area its name, with fans cramming onto apartment balconies and rooftops to try and catch a glimpse of the action when the Cubs are in town - despite their last World Series title arriving as far back as 1908.

Hyde Park
Dominated by the sprawling presence of the University of Chicago, Hyde Park is one of Chicago's most famous neighbourhoods. A South Side institution located on a side of the city synonymous with African American culture, Hyde Park is located some 11 kilometres south of The Loop and is renowned for its many historic buildings. Robie House, designed by perhaps America's most famous architect Frank Lloyd Wright, is one of the neighbourhood's best-known attractions, while the area has enjoyed a resurgence in popularity as one of the former home neighbourhoods of American president Barack Obama. Hyde Park is not only the home of the University of Chicago but several other educational institutions - a legacy of which are the numerous bookstores lining the neighbourhood's leafy streets.

Armour Square
What Lake View is to the Chicago Cubs, Armour Square is to their Major League Baseball rivals the Chicago White Sox. More successful than their city rivals the Cubs, the White Sox play out of the contemporary US Cellular Field in the Armour Square neighbourhood. However the area is equally well known for housing Chicago's long-standing Chinese community, which began transforming the neighbourhood from the late 1800s onwards with their distinctive East Asian architecture, making Chicago's distinctive Chinatown one of the oldest and most recognisable in the United States.

Wicker Park
Chicago has long been a city of migrants and among the city's numerous European enclaves are deep-rooted Polish, German and Ukrainian communities. Many of them have roots in the once industrial Wicker Park but while the beer barons who once dominated this part of town are long gone, they've since been replaced by a new generation of urban elites. Wicker Park retains its edge as one of Chicago's coolest neighbourhoods, with hip cafes, trendy bars and eclectic art spaces dotting its crowded sidewalks and squares.