Highlighting the cultural diversity of Hawaii’s heritage and fusing the flavours of Pacific Island ingredients with Portuguese baking techniques and Asian cooking styles, you can sample Hawaiian Regional Cuisine at Honolulu’s fine dining establishments. To see the down-home origins of some of Hawaii’s most famous foodie fare (ahem, Spam), join the queues of locals and visitors clamouring for a taste of these must-try street eats on the island of Oahu. 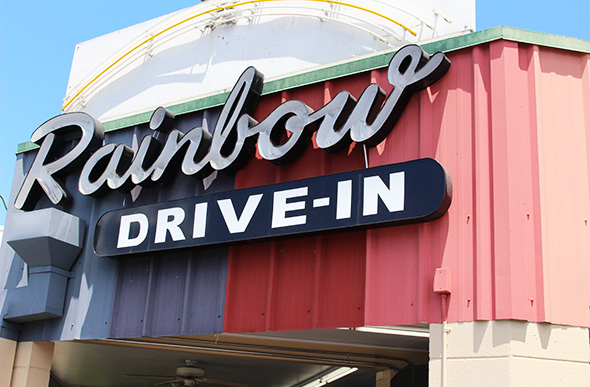 The US President grew up in Hawaii and is said to indulge in a plate lunch whenever he’s home in Honolulu. With origins as the staple diet of plantation workers in the 1880s, the plate lunch consists of two scoops of rice, macaroni salad and meat. It’s calorific, yet cheap comfort food.

Time to grind! LOCO MOCO GRAVY ALL OVER!! #rainbowdrivein #gao

A photo posted by Rainbow Drive-In (@rainbowdrivein) on

Located just outside the busy Waikiki strip, Rainbow Drive-In has one of those menus that mark you as a tourist as you try to decipher the nuances of ordering. Here’s what you need to know: choose your meat (fried chicken, fish, beef, pork, Spam or a mix); select your side (white rice, fries, mac salad or slaw) and smother the lot in gravy. Add an egg on top of a burger patty to make it a loco moco plate. 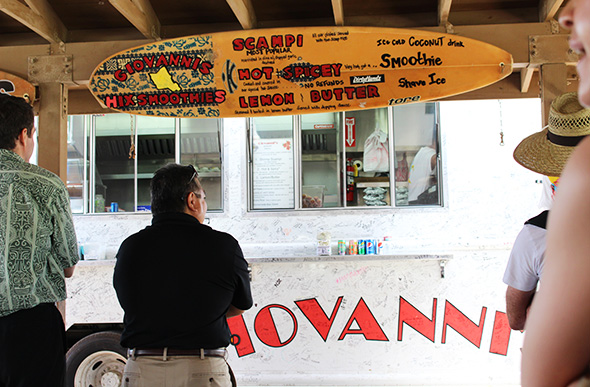 The aroma of garlic will assail you before you even set foot outside your vehicle. There’s no shortage of shrimp trucks along the North Shore’s Kamehameha Highway, but Giovanni’s Original White Shrimp Truck is the most famous of them all. And for good reason. 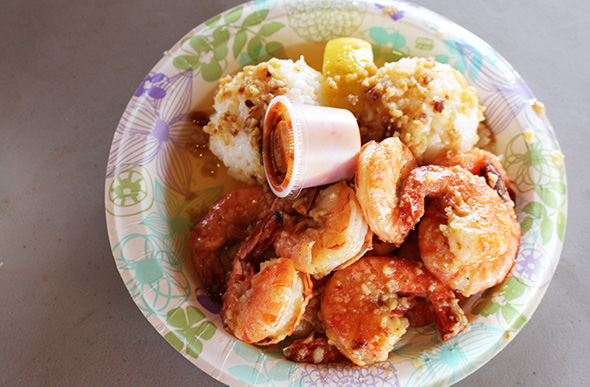 Shrimp Scampi with a side of the Hot & Spicy sauce. Image: Cassandra Laffey

During our recent Hawaii trip, my husband ate at Giovanni’s every day of our stay on Oahu’s North Shore, trying the Shrimp Scampi, Lemon Butter Shrimp and even the hotter-than-Hades “No Refunds” Hot & Spicy Shrimp (hint: proceed with caution). The generous serve of plump prawns come with shells and tails intact and accompanied by two perfect mounds of white rice. Memorable for all the right reasons. 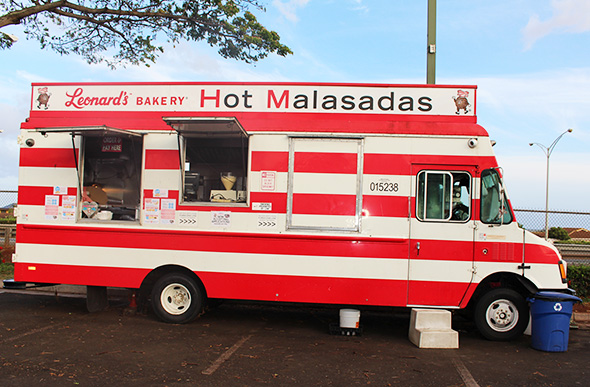 All aboard the Malasadamobile. Image: Cassandra Laffey

The pink box from Leonard’s Bakery hides the most delicious of sweet treats – the malasada. This Portuguese-style donut is lighter and fluffier than your standard dough ball and as large as your palm. Leonard’s Bakery in Honolulu has been purveying and perfecting their deep-fried dough balls since 1953 and the crunchy exterior encasing a puffy interior is a fan favourite.

A photo posted by Leonard's Bakery (@leonardsbakery_) on

You can visit the bakery on Kapahulu Avenue or chase down the two Malasadamobiles at Windward Mall and Waikele Premium Outlets, also on Oahu. While I can’t go past the cinnamon sugar coating, you can also try a filled custard puff in chocolate, coconut or pineapple or dusted in sour li hing powder. 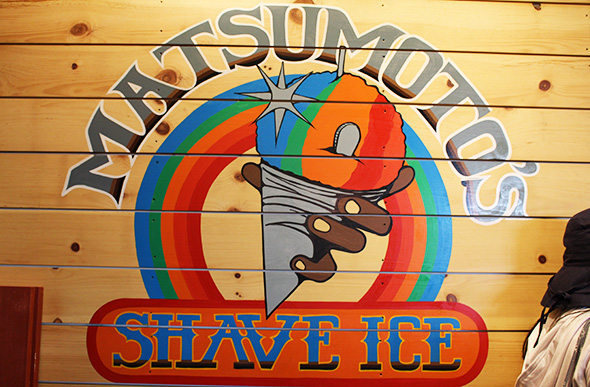 The queue for shave ice is worth the wait. Image: Cassandra Laffey

First things first: it’s shave ice, never shaved ice. And while you may have tried snow cones before, Hawaii’s shave ice is a lighter, fluffier interpretation of soft, flaky ice drizzled in homemade syrups. Matsumoto’s Shave Ice began its retail life as a grocery store back in 1951 and now serves over 1,000 shave ice bowls and cones each day in summer. 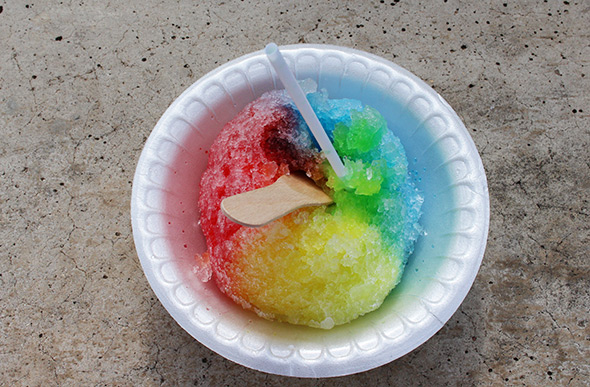 Join the queue of military, locals, surfers and tourists snaking its way outside the North Shore icon, and choose your flavours carefully. We went for the Rainbow combination of strawberry, lemon and pineapple, while most locals opted for the drool-worthy condensed milk and azuki beans add-ins. 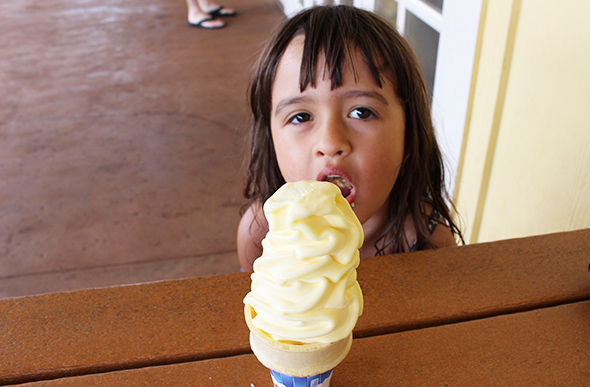 Similar in scope to the Sunshine Coast’s very own Big Pineapple with a train, plantation-themed attractions and, yes, pineapples, Oahu’s Dole Plantation has a secret weapon: the world-famous DoleWhip. Countless internet pages are dedicated to the slavish worship of this creamy yet dairy-free confection of tangy pineapple soft serve, which was originally only available at Disney theme parks. 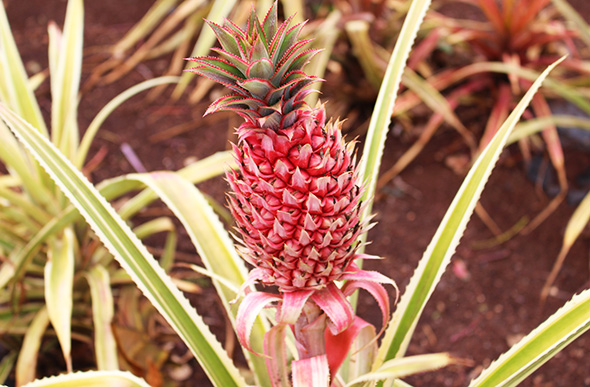 Even if you’re not normally a fan of the spiny fruit, you’ll be seduced by the refreshing and tangy appeal of DoleWhip. Dole Plantation serves it up as a float, a split, in a waffle cone with a pineapple garnish or even in a pineapple shell. Because, pineapple.