Earlier this year, Flight Centre's Rachel Surgeoner sat down with Michael Tierney from Human Nature to learn how the Australian quartet were finding their new local city, Las Vegas. It was clear they had a lot of love for their home-away-from-home and now the state of Nevada is reciprocating that affection.

After performing music for more than 15 years, there's no doubt these men know their way around a stage. However, recently they've also been dipping their toes into travel, becoming unofficial ambassadors for Nevada Tourism.

After almost six years living in Vegas the guys have had plenty of time to explore the region and discover their favourite things to do.

"You know Las Vegas is full of glitz and glamour, but if you want to experience something truly spectacular, here's my advice – get out of town!" says Human Nature's Phil Burton. 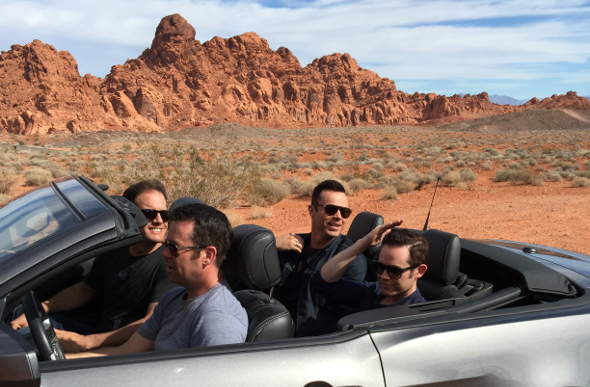 Entering Nevada's Valley of Fire is almost like leaving Earth behind. The vibrant red sandstone formations and vacant stretches of the Mojave Desert give the state park an otherworldly appearance.

The Valley of Fire caters to adventurous souls with multiple hiking trails and other more adrenalin-inducing activities. In the video below, the guys from Human Nature try abseiling (rappelling) down one of the Valley's sheer cliffs.

Lake Mead is a year-round playground, most popular during the hot summer months. With an area of about 640 square kilometres, it's one of the world's largest artificial lakes.

Locals and visitors flock to Lake Mead for a range of land- and water-based activities including fishing, scuba diving, horse riding, hiking and kayaking. Don't forget to explore the different areas such as the Historic Railroad Trail and picturesque South Cove.

You can decide to rough it at a camping site or opt for more creature comforts at one of the lake's resorts. There are also multiple restaurants to eat at if you get tired of canned baked beans.

Human Nature recently went a different route, hiring a luxurious house boat to explore the area, which also included appeasing their inner speed demons on a couple of jet skis.

Where else in Vegas? Is Downtown Las Vegas Worth Skipping The Strip

Drive 30 minutes outside of Las Vegas and you'll reach the historic Bootleg Canyon in Boulder City, part of the Mojave Desert. There are various tours that explore the area, but one of the must-do activities is ziplining down the Red Mountains.

Flightlinez is the resident zipline company with four different runs covering about 2.4 kilometres of desert. There's a bit of moderate hiking to begin with in order to reach the first zipline, but afterwards you can sit back as you cruise over the desert environment taking in wildlife and scenery.

With the ziplines reaching speeds of more than 100 kilometre per hour, this is an activity for the adventure travellers.

Men will be boys and boys will love trains. It's no surprise Human Nature walked away from the Nevada State Railroad Museum with big grins on their faces. The museum loves trains on a larger scale, boasting a collection of locomotives, cars and passenger and freight equipment.

You don't just look either. For an extra fee you can ride on one of the historic trains over the weekend and you can even become an engineer for an hour, during which you drive the locomotive including unrestricted access to the horn.

Visit your local Flight Centre store or call 131 600 for more advice and the latest deals on travelling to Destination.