A first flight with a nine-month-old and an unknown villa with a swimming pool … not to mention a bevy of lotus-seated yummy mummies. As the date drew nearer, the thought of going on a yoga retreat for mothers and children was not just stressful, it was terrifying.

But if the last stretch you attempted was keeping the bathroom door shut while pinning your baby to the changing mat, and your bikini line has gone the same way as lie-ins and nights out – basically if you are the mother of small children – HolyMama yoga breaks are indeed a gift from the goddesses.

And don’t worry: you don’t need to be Kate Moss or Gwyneth Paltrow to head to Ibiza for some early nights and healthy living. 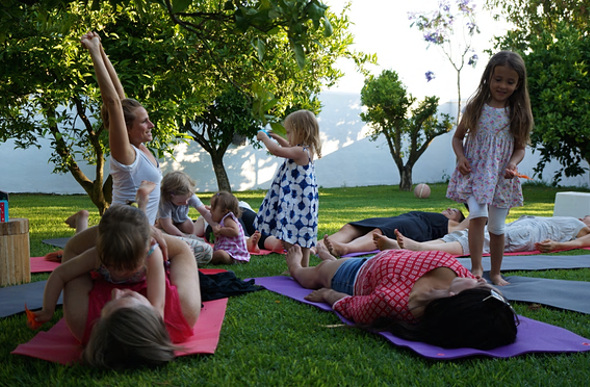 The brainchild of Claudia Spahr (mother of three and author of Right-Time Baby: the Complete Guide to Later Motherhood), HolyMama is unusual in welcoming children of all ages along with their mums (the week I was there, they ranged from four months to four years).

The mums were all different ages, too: fellas, however, are politely NFI’d.

Spahr, who left a career in journalism to set up retreats in India, realised that a generation of independent-minded women have enjoyed years of travelling and yoga holidays, and don’t want that to stop now they’ve had children.

Reached via an unprepossessing track in the rural south-west of the island, the HolyMama resort, near the village of San Lorenzo, is only a 20-minute taxi ride from Ibiza airport (although add a little time for the driver to find it). 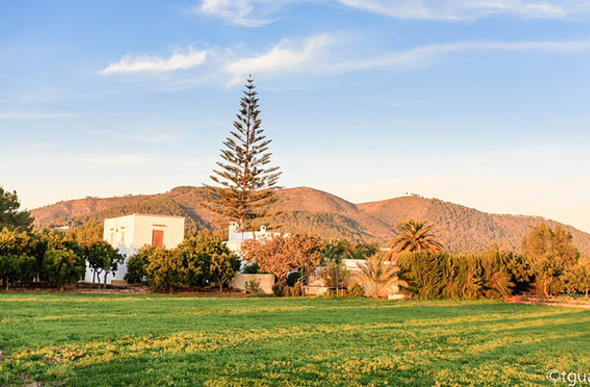 I stayed in San Jordi, a pretty, orange-tree-adorned finca, surrounded by a high wall, with a pool safely fenced in at the back. The retreat also includes two villas five minutes’ walk away in exotic, flower-filled gardens, with a large, graduated pool for children.

The day proper (my baby’d had me up since 6am) started with a smoothie and a healthy breakfast.

Like a crack rescue squad, the carers – a Montessori-led team – arrived en masse at 9.15am to relieve us of our offspring until midday.

Childcare is included in the cost, but for an extra A$475 you can hire a one-to-one nanny for this time. My son fell instantly in love with his senorita, and – small pang to my heart! –barely noticed I was missing.

Other children displayed far greater loyalty, and our first yoga session was conducted to a full orchestra of crying, wailing and pleading. And breathe …

By day two, the desperate chorus had subsided (maybe the carers just took them out of earshot), and we performed our sun salutations on the open deck facing the mountains, with only cockerel calls as a soundtrack.

The success of a retreat rests on the quality of the teaching and Suzanne Faith, new to the island from Toronto, is not only a yoga top gun, but an uber-mum to boot – she gave birth to her third child less than three months before. 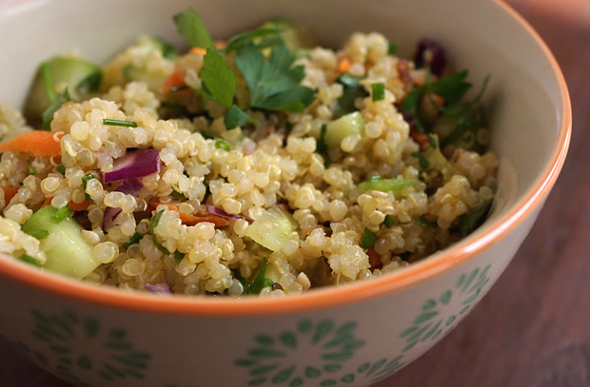 Time for a healthy brunch

If this all sounds a little like NCT classes in Lycra, it really wasn’t (pelvic floor exercises aside), and the 1½-hour classes passed all too quickly.

Then it was time for brunch, at which you could either reclaim your offspring or reacquaint yourself with the knife and fork.

Promising shiny hair and glowing skin, the food – vegetarian and largely gluten-free – was so virtuous it could have had its own blog. It was certainly a vast improvement on the soggy crusts and baked beans that constitute lunch back home.

Quinoa, courgette noodles and aubergine mush (the sort of food regarded with deep suspicion by my mother) were weaning opportunities to bring out your inner Gwynnie. Sitting around the long table in high chairs, the babies gleefully splattered each other with mashed avocado.

Just a short walk away – through, rather improbably, a chicken farm – lies the stylish Atzaro spa, all Balinese daybeds, sunken ponds and beautiful people; this is Ibiza after all.

We “holy mamas” got to choose between a complimentary pedicure or facial: how often do you get to have your heels scrubbed while someone else looks after your child? Despite its hip vibe, Atzaro is a surprisingly child-friendly and chic place to have an ice-cream.

Reconnect on South Island. A Breath Of Fresh Air

Find a quieter time on Bali. Bali Away From The Beaches

A Place For Mums In Need Of A Rest

Therapies are also available closer to home – in your own room back at the finca, in fact. I had a massage with the celestial Tiara Mana (really), which was so lovely I had a little cry.

Spahr has assembled the best of everything: venue, childcare, catering, therapists.

But most special of all, she offers a place to mums in need of a rest – and no one qualified more than the mother of three from Edinburgh, who has two severely disabled children and had come for a break with her youngest. I swear to invoke her name every time I even think about complaining of being a bit tired.

It was great to hang out with mums from all over Europe in such a laid-back environment – and to share a non-yogic glass of wine after the small people were in bed. 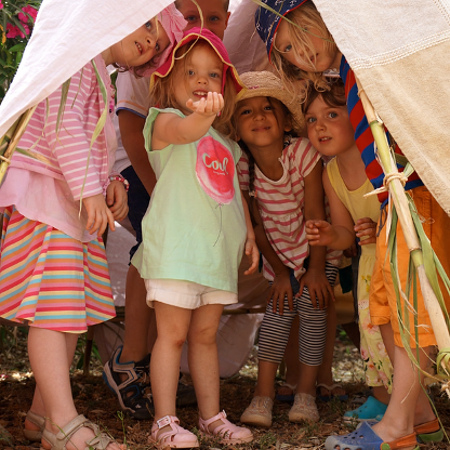 Children are kept occupied for three hours a day

Evening meditation is available, but my real child was demanding more attention than my inner one, so I’m afraid I swerved: but reports at breakfast were positive.

HolyMama is only in its third year and as with any youngster there were some unruly moments. On our final evening we managed a group outing – no mean feat – to Benirras beach for cocktails at sunset.

Most of us had been to Benirras in previous lives (not the Karmic sort), but those younger selves could never have imagined dancing to the bongo drums with our little ones amid the boho lovelies and hippie expats.

This holiday is all about the new love of your life. If you have just had a baby and can’t imagine leaving your front door – let alone the country – take a deep breath and book.

This is the ultimate babymoon – you will have earned it. Namaste mamas!

Visit your local Flight Centre store or call 131 600 for more advice and the latest deals on travelling to Ibiza.

This article was written by Lisa Allardice from The Guardian and was legally licensed through the NewsCred publisher network.