As France's national holiday, Bastille Day is celebrated with spectacular fireworks in the capital, Paris. It's well known that the catalyst that sparked the French Revolution was the storming of the infamous Bastille Prison on July 14 1789 - an event that changed the course of French history. While it certainly would be fantastic to experience Bastille Day in France, many cities around the world embrace the event and host their own Bastille Day celebrations.

Here are our favourite Bastille Day celebrations from around the world. 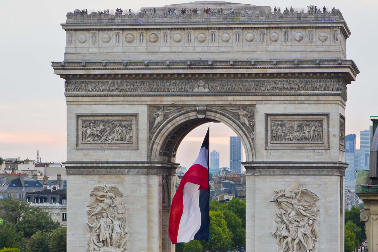 Boston, United States
Organised by the French Cultural Center, Boston celebrates the French holiday with a massive al fresco party on Marlborough Street, between Berkeley and Clardenon Streets - the event usually attracts around 2,000 enthusiasts. There is live music with a distinctive French flavour, delicious cuisine and much dancing. In 2013, Atlas Soul, an outfit that blends hot Afro-Mediterranean grooves with jazz and Madame Moustache, a country-rock band hailing from Québec will entertain the crowds.

London, England
Londoners embrace everything French with their annual festival in and around Borough Market. Throughout the day there's a variety of events organised including silk-weaving and spinning demonstrations, a waiter's race and wine tasting. Delicious French cuisine will be available to savour and theatrical performances and live music will keep festival goers entertained. The kids will appreciate the bi-lingual storytelling.

Franschhoek, South Africa
South Africans celebrate the occasion with the Franschoek Bastille Festival. This region is historically connected to France because it was originally settled in 1688 by French Huguenot refugees; Franschoek is Dutch for the French Corner. The focal point for the event is the Food and Wine Marquee, where party goers can sample locally-produced wine and indulge in culinary delights expertly produced by the region's best chefs. Also on the agenda is a boules competition, a popular ball game in France, the waiters' race and a minstrel parade. Festival goers can also wander through the farmers' market and the craft market stalls.

Sydney, Australia
In the harbour city, the historic Rocks district is the focal point for the Bastille Day celebrations with a Saturday night extravaganza that generally caters to around 2,000 attendees. Guests are greeted with a drink on arrival at the Argyle before being entertained with a traditional cancan show, French DJs and make-up hostesses. French-inspired culinary creations will be available and there'll also be Chartreuse liqueur tasting.

Auckland, New Zealand
While the beautiful Auckland suburb of Remuera is transformed into a quaint French village throughout July, the celebratory day is on the Saturday closest to Bastille Day when Remuera Road becomes a street festival.  This is the perfect event for the whole family - with roving musicians, street entertainers and dancers to keep the revellers in the festive spirit. Be sure to catch the fashion parade, the fencing demonstration and the bike decoration competition, while young Francophiles will enjoy the storytelling.