I'll admit, I was sceptical. Over the last decade or so, publications such as Food & Wine and the New York Times have expounded on Ireland's exciting new food scene, revelling in the capital’s locally sourced ingredients and highlighting new chef talents along the country's southern coast.

But I’d been to Ireland three times in the last 10 years, and I never remembered having a meal worth writing home about. In fact, the first time I visited, I was hard-pressed to find a pub serving food past 7pm.

And yet, here I was, in a standard pub in Doolin – a tiny musical hub in County Clare on Ireland's west coast – looking at a menu that offered such delights as Atlantic chowder garnished with seaweed dust. 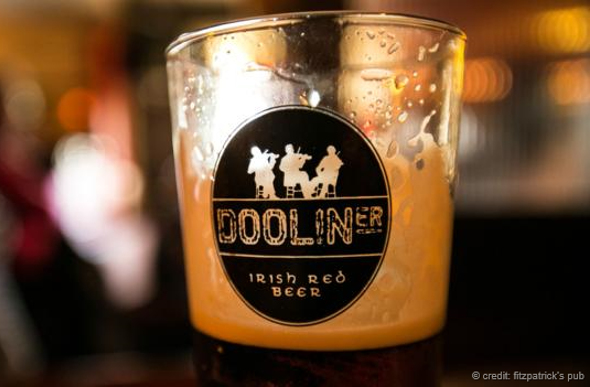 I had just ordered a starter of pan-seared scallops with black pudding and celeriac puree, followed by a fillet of Atlantic salmon with local Burren honey.

Each dish – from the local seafood trawler to the 24-hour slow cooked bellied rib of pork – had a suggested international wine or Irish craft beer pairing. The pub even brewed its own Dooliner Beer: a smooth Irish red ale with a lightly hopped, tea-like flavour that (so they say) comes with a no-hangover guarantee.

All around me, the sights of Ireland were the same as the times I'd been before. The pubs were just as lively, the traditional music just as rich, the people just as friendly.

But the food was surprisingly delicious; innovatively prepared and locally sourced. And sitting in Fitzpatrick’s Pub that night – in a land where the passion comes from the music you hear and the people you meet – I felt as though the food had been the country’s missing piece: the thing that intensifies their world-renowned warmth and makes their famous hospitality even richer.

This was not the same Ireland I'd been to before. 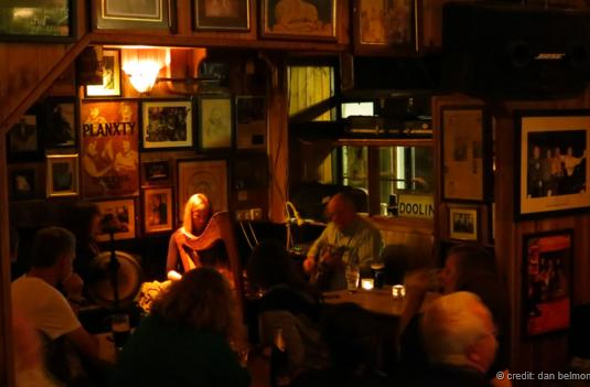 “Ireland as a food destination is really going to take off,” said Niall Hughes, proprietor and chef at Doolin’s Sea View House B&B.

“Italy has the name. France has the name. In five to 10 years, Ireland will as well. Sometimes big movements take little steps – and if you end up with enough of them, you make massive changes.”

Before stumbling into County Clare’s changing food scene, we’d planned (like most visitors) to only stay in Doolin for one night.

The seaside village’s main draw is its four pubs (and there are only four pubs) that attract some of County Clare’s – and even Ireland’s – best musicians for near nightly, standing-room-only, traditional music sessions.

While trad can be found across the Emerald Isle, Doolin is one of the few places that offers such a concentration of incredible, no-cover performances, even if the crowd tends to be a bit tourist-heavy.

"There’s a little bit of magic in Doolin,” said Blackie O’Connell, a musician who has been playing in the village for the last 16 years.

“I don’t know if it’s the landscape or the people – or a combination of both. But everyone is here to have a good time. In the pubs, you could be sitting with two Germans and a couple from Switzerland and a fella from Argentina.

"People end up hanging out with each other and spending the night – it’s very homey."

In the steps of a great Irishman. Where Yeats Spoke With Ghosts

It's the place for music. Tickled Green By Ireland’s Best Pubs & Music Bars

Breakfast Chases Away The Night Before

The next morning, as we recovered from our pub crawl over breakfast at Sea View House, we quickly realised we needed another night in town.

Spread before us was a buffet of local cheeses, poached figs in orange syrup, stewed apple with cinnamon and nutmeg, Moroccan orange salad and homemade yoghurt.

From the cooked-to-order menu, I selected a light and fluffy goat cheese frittata, made with the Sea View’s own free-range eggs, award-winning St Tola’s goat’s cheese and tomatoes and herbs from the B&B’s garden. 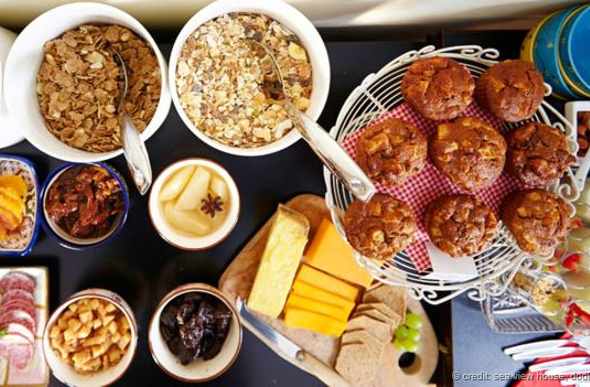 “The food scene across Ireland is changing – but the Burren in particular has really taken off because the network that we’re involved in is really paving the way,” Hughes said, referencing the 250 -square kilometre karst landscape at Doolin’s doorstep. “The quality of ingredients was always there. But there’s a better awareness of how to use it.”

At first glance, the Burren doesn’t seem like it would be a particularly easy growing area. It’s a harsh, jagged-looking territory, where the rolling hills of Ireland become unrecognisable beneath massive limestone outcroppings.

But despite appearances, the region has an unusually temperate climate, with one of the longest growing seasons in the country. The cracks and crevices between the rocks also support a diverse variety of growth, allowing Arctic, Mediterranean and Alpine plants to grow side by side. 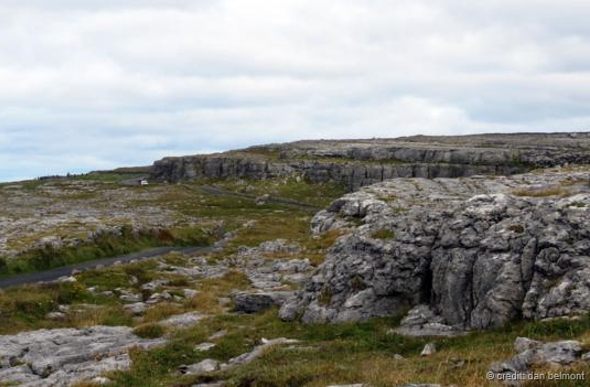 “They call the Burren the fertile rock,” Hughes explained.

“It’s ideal for lamb and for beef. During the winter, they’ll move the cattle into the mountains because the limestone is warm. It acts as a radiator and soaks up the heat. The cattle then graze among the limestone.”

It’s the type of landscape that attracts a certain type of producer.

“This place draws in people who are interested in a different lifestyle,” Hughes said. “They’re not interested in making loads of money. They just want to make good food.”

Hughes harvests his own dulisk (seaweed), going out with a pair of scissors at low tide. His eggs come straight from the ducks and chickens on the Sea View House farm; his herbs, fruits and vegetables from the garden; his cheese and smoked salmon from neighbours in the Burren.

Delicious Fresh Crab On The Tiniest Of Islands

Fitzpatrick’s Pub also sources most of its ingredients locally. Its beef comes from the pastures of County Clare, the lamb from the fields of Kilshanny, the daily fish from Garrihy Seafood.

Fitzpatrick’s and Sea View are part of the three-year-old Burren Food Trail, which in May 2015 was named a European Destination of Excellence for tourism and local gastronomy.

Eager for another taste of the food and the landscape, we took a 45-minute ferry ride out to the smallest of the Aran Islands, Inisheer, which is peppered with stone walls and historic forts.

Dara, Hughes’ wife, had suggested a trip to the 300-person, Irish-speaking island for a lunch of daily caught crab at the only pub, Tigh Ned.

But that didn’t prevent me from stopping by the Man of Aran Fudge stand upon arrival at Inisheer’s pier. The sweetness of their signature Heavenly Honeycomb was the perfect guilty precursor to a meal of tomato and lentil soup and crab claw salad. 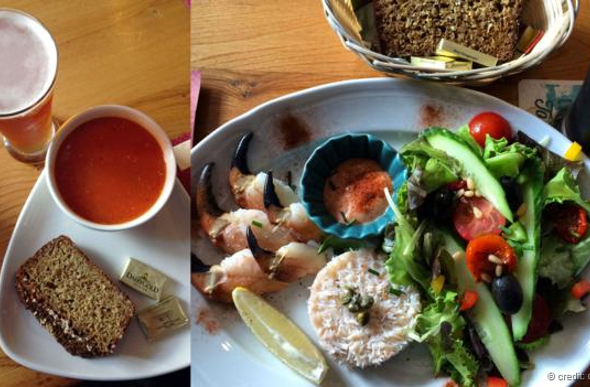 Dara hadn’t lied – Tigh Ned served up some of the meatiest crab we’d ever had. I was happy to take the longer return ferry back to Doolin, passing by the Cliffs of Moher.

It was a much-needed break to digest before we set out for our second night.

Back in Doolin, Dan and I were ready to make the rounds, stopping in each of the four pubs for a pint like we had the night before.

As was expected, craic poured out of every open door, and we ended up settling in for the night at McDermott’s, a pub that’s been around for more than 120 years. 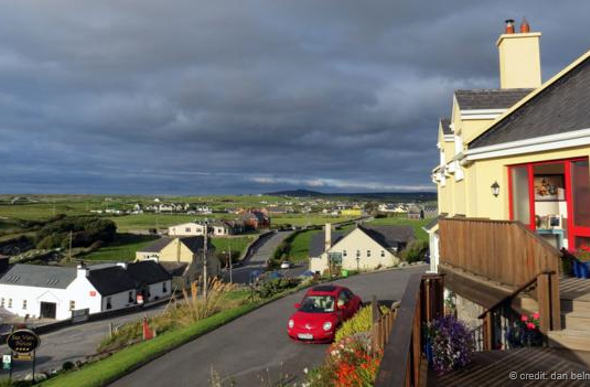 Much like Fitzpatrick’s is a key player in County Clare’s changing food scene now, McDermott’s was  a strong supporter of Doolin’s fledgling music scene more than 40 years ago.

“When I came to Doolin in 1976, there was only a fraction of the houses here and music was on about one night a week,” said Patsy McDermott, the pub’s fourth-generation owner along with her husband, Stephen.

“Now it’s the musical capital of the world, you could say. Definitely the traditional music capital of Ireland.”

On stage that night was Tara Howley, a singer and uilleann piper who has been playing in Doolin since she was 16 years old. There is a swing and a rhythm to the music in north Clare, and for Howley, that rhythm stems from being so close to the Atlantic Ocean. 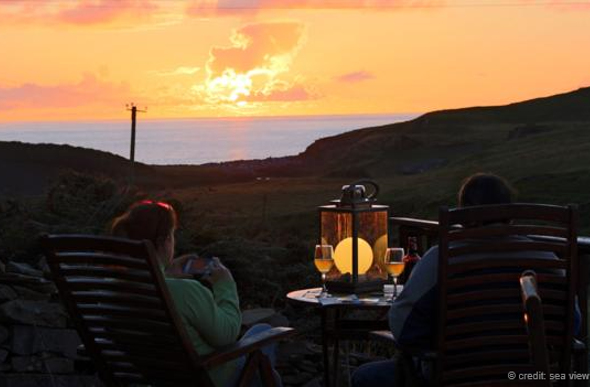 “If you stand at Doolin Pier and take a few deep breaths, you realise how lucky you are to be where you are,” Howley said.

“Every wave is different; they all break differently. And that’s the same with traditional music: you have the foundation of the tune, but everyone plays it their own way. That’s the beauty of it. The music, the quality, the people – it’s just such a special place. Doolin is always alive.”

This article was written by Allison Busacca from BBC and was legally licensed through the NewsCred publisher network.