When Keith Wright boards a plane later this year he will be embarking on his eighth trip to Europe – a fact that is made all the more extraordinary because of his age.  Keith was born at a time when Zeppelin and Sopwith aircraft battled it out  for victory over the Western Front and the famous Wright brothers (no relation to Keith) had only just finished conducting their flying experiments.

In 2012 Keith celebrates his 95th birthday and as such is possibly Australia's oldest backpacker – who prefers to travel independently. 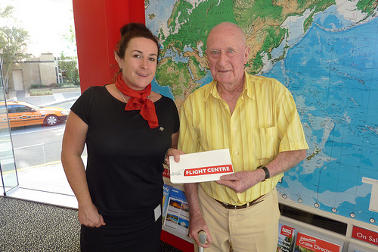 Keith Wright and his Airline Tickets to Europe

"My belief is that if you are fit and able to travel independently, it is the best way to see as much as of the world as you want," said the spritely nonagenarian.

Keith took his first solo trip when he was 85, after his wife Barbara passed away. This sojourn was a four-day bus trip through Turkey, which inspired Keith to continue exploring other countries. He prefers to travel in economy class on a round-the-world ticket and regular checks in to hostels, where he enjoys the comfort of a single room but occasionally has no qualms sharing a dorm room with Gen Y backpackers.

"Most people I meet are surprised when I tell them my age and amazed that I have come all the way from Australia," he said.

"Wherever I go, I wear my Australia cap, which gets me a lot of attention from the locals."

On one occasion, Keith was sitting on a park bench and a stranger saw that he was wearing his iconic Australia cap. The curious local said "Ahh, Australia is so far away. I have never been because I don't like flying for that long."

Keith responded, "Oh, it's not that bad if you break it up by doing stopover in Singapore or Dubai."

One of Keith's favourite destinations is San Sebastian in northern Spain because he loves dining in the Pintxo Bars and looks forward to returning there on this holiday.

"I have hitched a ride on the back of a scooter in San Sebastian and seen things that most tourists haven't seen, because I have walked the back streets and taken the train or bus to a nearby town for the day," Keith said.

Since 2002, Keith has booked his travel at the Flight Centre and Escape Travel in Burleigh Heads. The team in the store have decided to make his next holiday even more memorable, by paying his upgrade to business class on his Emirates flight. It's important that he can stretch out in style as he travels to Europe.

"Every booking I have made for him has been an inspiration to me," Christina said.