When April Lea's goggles snapped in the middle of a murky lake, she was ready to call it quits. Somehow, though, nerves turned to adrenaline and she made it out of the water, on to a bike and pounded the pavement all the way to the finish line. She's even got the sunburn to prove it!

We chatted with April about what it's like to train for your first triathlon, what obstacles popped up along the way, and those mixed feelings of exhilaration and exhaustion when it's all over. 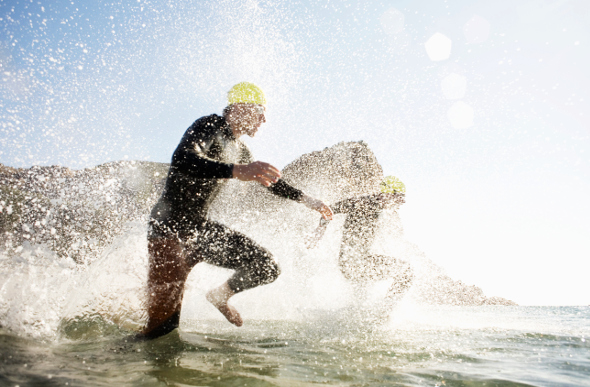 Make a splash at your first triathlon

When did you decide that a triathlon was something you wanted to do?

I really enjoy fitness – all aspects of it. I have some particular passions but I'm always looking to try something new and challenge myself, especially when it comes to fitness.

I've always been a runner and recently have gotten into cycling, so the next logical step was to make like a fish and swim! From there, the idea of participating in a triathlon was born.

What triathlon did you take part in? Did you go solo or did you have friends or family competing with you?

I participated in the Gatorade Queensland Triathlon Series Robina Sprint, which is a 750-metre swim, a 20-kilometre bike and a five-kilometre run. My friends and family came to support but I completed the event solo.

Describe the weeks of preparation leading up to the event.

Flying blind and crazy. My partner is old-hat when it comes to triathlons but even he couldn't calm my nerves or convince me I had everything prepared!

Had I remembered to pack my cycle glasses? And my Endura gels? What about my goggles! Where are my goggles?! It was crazy. I think I went through my checklist a million times every day leading up to it.

What about the day before the event? How were you feeling?

Nothing I can say will describe the level of sheer terror and gut-wrenching nausea I felt the day before the tri. I was SO nervous! Not so much about the bike or the run, but swim – which is notoriously the hardest part – just had me shaking in my boots.

I was in two minds. One side was feeling confident in my ability, while the other was busy writing her will and telling the cat she loved her. 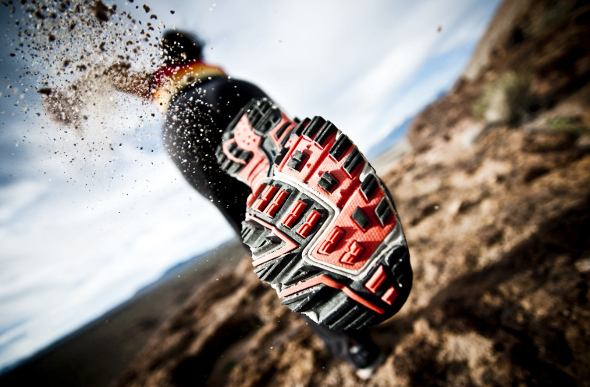 What were some of the obstacles you faced during training? Was there a time you felt like chucking in the towel?

To train properly for a triathlon, I needed to come to terms with the fact that I wouldn't be able to continue my regular fitness routine at the same time. It was just too much of a load and I would end up burning out.

Having to cut back on my other non-triathlon training was one of the hardest parts about it, funnily enough. I enjoyed everything else – having a training partner really helps – except for the swim. It was boring but also soothing at the same time. Is that possible?

What was the hardest part of actually competing? Was there anything that surprised you, perhaps about yourself?

The entire triathlon experience had me in fear for one reason: the swim. I have an irrational fear of murky water, sharks and drowning.

Coming to terms with the fact I was going to be swimming in a canal where all three of these things had a (very slim) possibility of occurring was the hardest part of actually competing.

Wading into the water with the other 15 girls in my age group before our start, they all looked so calm and collected – they knew the ropes. I tried to mirror them, with little success!

About 50 metres into my swim, my goggles snapped. I was in murky, very weedy water with no goggles and a heart that felt like it was going to pound right out of my chest.

At that moment I really thought about turning back and admitting I wasn't cut out for this. But instead, I turned on to my back and proceeded to backstroke the entire swim.

One of the lifesavers kept asking me if I was okay and did I want to head back, but I didn't. I just kept going. That surprised me about myself.

I managed to push my fears to the back of my mind and just get the swim leg done, even though at the time I thought I was going to flake. I knew that as soon as I hit the end of the swim, it was a home run. The rest would be in the bag.

I still don't know where that confidence and determination came from, but I'm going to thank Jiminy Cricket for the push. 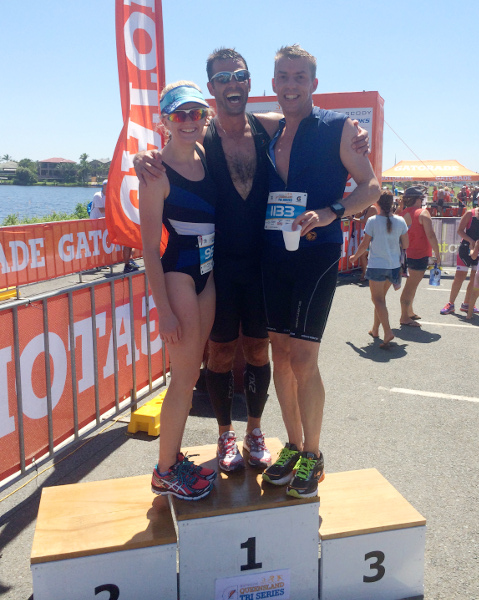 After an hour and a half in 35C heat, April did it!

Exhilarating. Exhausting but exhilarating. I couldn't believe I had done it! Had I really just spent an hour and a half racing my heart out?

Yes, yes I had. I've even got the nasty sunburn to prove it! It was one of the best feelings of my life. It will be the feeling I strive for when I set myself a challenge.

What's next? You set a personal goal and reached it – is the bar set even higher now?

I'm addicted! The thrill of completing the race is too good a feeling to experience just once. I hope to complete the Cairns 70.3 Half Ironman in 2016.

The bar might be set a bit high, but we will see. I might get there. I got through the swim when I thought I couldn't, so who knows?

What advice would you give to someone who was thinking about their first marathon or triathlon?

Do it! Let yourself feel nervous, sick, excited, terrified, all of the above. The nerves will convert into determination and power on the day, and will help you get across the finish line.

Don't doubt yourself. Don't think about it and go "No, I'm too unfit" or "No, it's too scary" or "I'm not a good swimmer". If you train and believe in yourself, you will do it.

- You can follow April's adventures at her lifestyle and fitness blog, mynameisapril.org

Challenge yourself at these 2015 Queensland events »

Ready to take the challenge? Flight Centre Active Travel can arrange your adrenaline-fuelled holiday, so you can focus on training for the big day! They arrange holiday packages to triathlons, marathons, trekking, cycling and hundreds of events across the globe.