Yet over the past few years a street-food revolution has unfolded in the English capital. From the financial districts of the city to the trendy suburbs of the inner north, street-food vendors are lining the pavements selling a massive variety of food.

They sell their fare out of vans, from food carts or, most commonly, from beneath canopies erected on footpaths. Mostly the food is cooked fresh, right before you, on grills, or in woks, pots or pans. Watching your lunch or dinner being prepared at close proximity is a wonderful way to enhance your appetite. 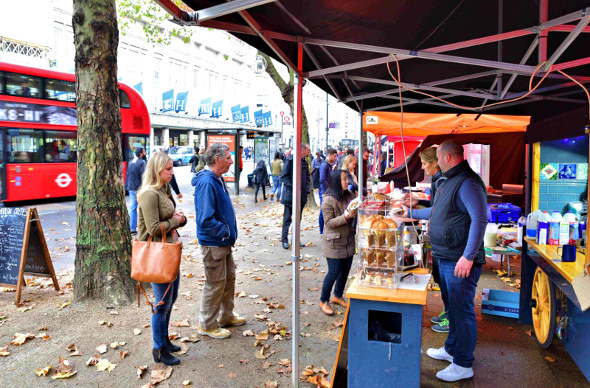 Street food is so popular in London that vendors are busy even in areas saturated with restaurants and cafes. Image: Ronan O'Connell

Street food has become such a hot trend in London that local cooks and entrepreneurs are scrambling to get involved.

Thai chef Eddy Vichit told me he was delighted when he managed to get permission to open his food stall just north of Covent Garden in central London.

Here, on the wide footpaths which flank the very busy A400 road, Mr Vichit is one of four street food operators located side by side. There’s a gourmet burger stall, a crepe seller, a falafel stand and Mr Vichit’s Thai food. Born in Bangkok, he said that he missed the ubiquitous street food of his home city and was excited by how popular it had become in London.

Mr Vichit said he had been open just two weeks but already had repeat customers, ranging from English office workers to local Thai-born Londoners. He specialises in spicy curries, ranging from Massaman to Green and Red varieties. “It’s very delicious,” one of his customers interjected as she looked up from her bowl of Massaman.

The vendors here in Covent Garden are obviously doing something right, as each of the four was busy during their Wednesday lunch trade. 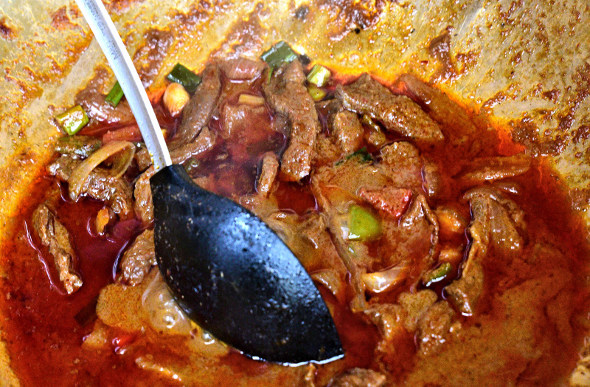 Find your favourite time to go. Seasonal Guide To London

This is despite the fact that they have heavy competition from more traditional food outlets – the area is blanketed in cafes, sophisticated restaurants and fast food chains.

Londoner Paul Picc, who serves up hearty looking burgers and sandwiches, said he was so rushed he didn’t even have time for an interview with me.

“I’ve got orders flooding in,” Mr Picc said. “It’s always like this at lunch time, people love a good burger”.

After wolfing down one of Mr Picc’s meaty offerings, customers can walk a few metres down to Dan Knight and Andrea Anca’s stall, where crepes and cakes are the focus.

Mr Knight told me their business had been open a few months and he thoroughly enjoyed serving up food by the streetside. It made for an interesting work day, and their customer base was growing by the week. 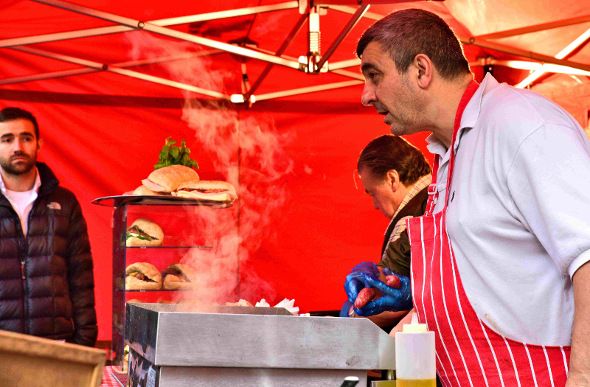 There are clusters of street food operators like this one at dozens of different locations across London. At Berwick Street Market in the Soho district the vendors open for lunch, including a Vietnamese stall which sells the delectable Banh Mai – a toasted baguette filled with vegetables and meat, typically spicy pork or pate.

There is also the Southbank Centre Food Market and the “Good Food” markets in Picadilly and Victoria which are renowned for their quality of meals.

So prevalent and popular has street food become in London that Time Out even went to the lengths of sending reporters all over the city to compile a ranking of the Top 50 Street Food Stalls in London.

So, if you really needed another reason to visit London, look no further. Hit its streets and fill your belly.