Luke Nguyen vividly remembers the day he caught his first glimpse of the Mekong River. He was 19 years old, on his first visit to his parent’s homeland.

“Both my mother’s parents are from the Mekong, so I went there to see them and see how they live,” he recalls. “When I arrived I literally stepped off the boat into their house. They live very simple lives there. The men are fishermen while the women tend to the rice fields and the children are responsible for collecting coconuts and mangoes. Everything they do for a living relies on the Mekong.”

The acclaimed Sydney chef wanted to immerse myself in their culture and live the way they did. That included sleeping on bamboo mats on the floor and jumping in the river to bathe each morning.

“Come harvest time we filled the boat and went up to the markets of Saigon, which takes six to eight hours,” Nguyen says. “They didn’t have a speed boat, just a long boat. I appreciated the river so much from that day. It felt familiar.”

Nguyen was born in a refugee camp in Thailand after his parents escaped Vietnam’s south to avoid reprisals from the communist north and being thrown in re-education camps after the fall of Saigon during the war, but coming back to Vietnam it felt like arriving home for him.

While he fell in love with the aromas and noise of Vietnam, Nguyen finds the Mekong peaceful. He filmed his SBS food series Luke Nguyen’s Greater Mekong there, and returns twice a year in June and December to lead culinary tours for travel company APT, for which he became an ambassador four years ago. 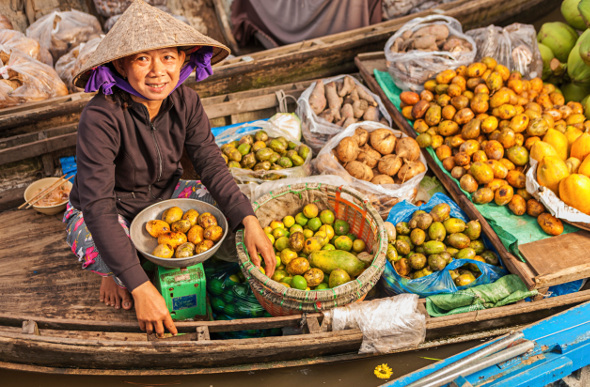 A Vietnamese woman selling fruit from her boat (image: Getty)

“It’s always really interesting; I meet really amazing people and I personally learn so much from them,” he says. “To me, the mighty Mekong River is the lifeblood of Vietnam. It flows from Tibet to China, Myanmar, Laos, Cambodia, Vietnam and Thailand and sustains the lives of 60 million people in terms of food, water and transport. It snakes through so many different cultures which have so many different cuisines. You really see the energy and the life when you’re on it. It’s really different to what you see in Australia.”

Nguyen’s favourite village to visit on the cruise is Tan Chau, which sees few other tourists.

“You have to get on a small boat to get there and you enter this village and it’s almost like the children have never seen foreigners before,” he says. “They run up and try to communicate and they follow us the whole time. They’re interested in why we’re there. We give them pens and books and things they need for school and you see where they go to school.

“It’s very traditional housing and farmland. You can see lots of chillies being grown, lots of rice and different types of herbs and vegetables. We get a great insight into the lives of the Vietnamese villagers.”

He also loves the floating markets at Cai Be, which he describes as “colourful” and “buzzing”.

“It’s the best floating market I have been to in the world because it’s a wholesale market, it’s not designed for tourists,” he says. “It’s where my aunties and uncles who want to sell to the boats that go to Saigon go. You see boats full of mountains of watermelons, mango or jack fruits.” 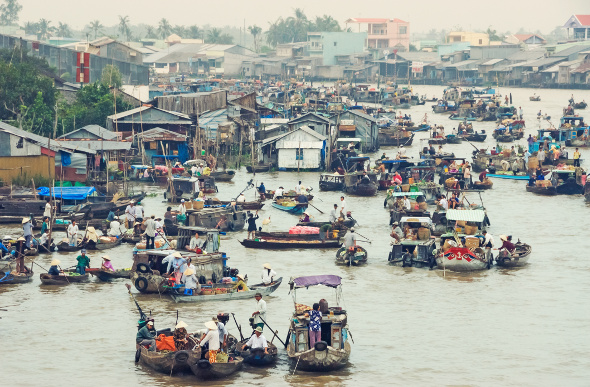 All people flock to the floating markets for food and other items (image: Getty)

By boat or bike? Cycling Vietnam – A Two-Week Itinerary

The sellers place the type of fruit they are selling on top of a pole on the boat.

Travelling by ship also gives a great insight into how people along the Mekong live.

“There’s no doors on the houses; you can see people cooking, washing the dishes, washing their hair,” Nguyen says.

The cruise also includes visits to a factory where you can see rice paper, rice wine and sweets being made, and a brick-making factory.

“A lot of the places we go I filmed at during my series,” Nguyen says.

“The towns are really special. If you travelled alone I don’t think you would ever get to see these places.”

There are also plenty of opportunities to try Vietnamese cuisine. On the first night of the cruise, Nguyen cooks a welcome dinner for passengers.

“I do a traditional dinner with dishes from all over Vietnam,” he says. “It’s a really good introduction for people who have just arrived. 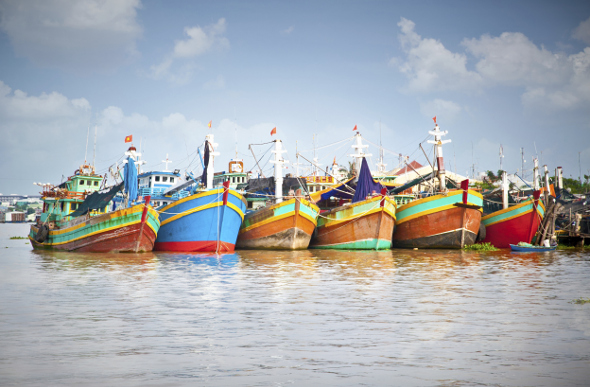 The fishing boats strike an array of colour on the Mekong

Nguyen became involved with APT after opening his Sydney restaurant Red Lantern and making cook books and cooking shows to showcase Vietnamese culture. He realized the next step was actually taking people there and showing them in person.

“I love to share my experiences of Vietnam and the culture with them,” he says. “My aim is to show guests the real Vietnam, not just the tourist things but the real culture, real people and real stories. To be able to meet the people and have conversations through myself or through a local guide is a memorable experience.”

The average age of passengers on the cruise is around 55 to 60. But on a recent cruise Nguyen was on, passengers included a 21-year-old girl travelling with her Cambodian-born father who escaped the Pol Pot regime and was returning for the first time.

“He reached an age where he thought maybe he should go back and he took his daughter with him,” Nguyen says. “They just loved the trip. The last trip I had a gentleman who was 81 and he did all the day trips. It’s mostly Australians with some Americans, some British and some kiwis.”

Nguyen says the APT ships are like 5-star hotels, but small enough to visit little villages.

Visit your local Flight Centre store or call 131 600 for more advice and the latest deals on travelling to Vietnam.