Nestled at the crossroads of Belgium, Germany and France, Luxembourg sits quietly in the shadows of its larger European counterparts, offering something special for travellers who stumble into its boundaries. It takes less than two hours to travel the length of Luxembourg by car but the landlocked country manages to squeeze a lot into a small space. The Grand Duchy of Luxembourg, to go by its formal title, is dotted with fairy-tale-like castles and fortresses tucked into mind-blowingly beautiful natural surrounds. If you're thinking about visiting the heart of Western Europe, these five regions of Luxembourg are sure to keep your cameras snapping. 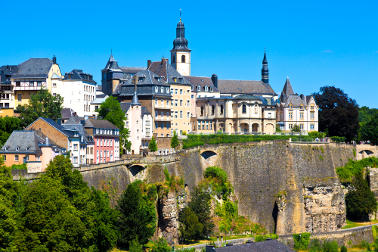 Luxembourg City
Luxembourg's capital city of the same name is a place of great contrast. From medieval buildings in the Ville Haute district to glittering modern high-rises, Luxembourg City is filled with architectural eye candy. The city is small enough to be explored by foot or, if you're feeling a bit more active, you can hire a bicycle at the Vel'oh! stations around town. Some notable city highlights include the Heritage listed Casemates Bock, an intricate network of underground tunnels, the MUDAM museum of modern art and the impressive Grand Ducal Palace, the current home of the Grand Duke of Luxembourg. Come for the panoramic views across deep surrounding valleys and stay for the Michelin-starred restaurants and luxuriously chic boutiques.

The Ardennes
From patchwork highlands to lazy rivers snaking their way across the landscape, the Luxembourg Ardennes are nature at its finest. With two dedicated reserves and no limit of untamed wilderness, the Ardennes are the perfect playground for lovers of the great outdoors. The countryside seems to be purpose-built for walking, hiking and cycling through postcard-perfect villages punctuated with historical ruins and fortifications. Framed by the Ardennes forests, Vianden county could give any charming European town a run for its money. The medieval Vianden Castle towers over petite buildings huddled along Our River, conjuring up images of knights in shining armour and grand battles to win the affections of turret-bound damsels.

Moselle Valley
Only half an hour away from Luxembourg City is Moselle Valley, one of the smallest wine growing regions in Europe. The towns along the way would be hard pressed to get any more delightful, with white stone buildings cloaked in a natural curtain of ivy and quiet chateaus welcoming guests like familiar family friends.  Vineyards slink across the Moselle Valley, producing a variety of grapes that become Riesling, Auxerrois and Pinot Gris wines. Where temperatures drop in the hinterlands, fruit trees yield the crops needed for regionally renowned liqueurs and schnapps. On the border of Luxembourg, Germany and France, the village of Schengen stands out as the birthplace of a borderless Europe, opening up limitless travel possibilities.

Mullerthal
To the country's east, Mullerthal has been dubbed Luxembourg's Little Switzerland thanks to its hilly landscape. The footpaths of Mullerthal, crisscrossing the terrain, guide hikers through scenic waterfall-laden forests and open fields speckled with rock formations trapped in geological ages long passed. Mullerthal is home to Luxembourg's oldest town, the charismatic Echternach, which dates back to the 7th century. Nature and culture unite in glorious harmony in Echternach where visitors can wander through enchanting woods and cobbled city streets &ndash; it wouldn't be out of place to run into a Brothers Grimm fairytale character in Mullerthal's poetic surrounds. Each year on Whit Tuesday, thousands of pilgrims fill the streets for the time-honoured Dancing Procession, highlighting the town's rich cultural heritage.

Terres Rouges
Also known as the Land of the Red Rocks, the Terres Rouges region in Luxembourg's south owes its name to the red ore that spurred the country's industrial success. The deep ochre landscapes, almost reminiscent of the Australian outback, are quieter now than in their heyday when iron mines and factories transformed little Luxembourg into a booming trade country. Close to the French border, the Terres Rouges township of Differdange offers a range of historical and nostalgic touristy treats. Visit Lasauvage, Luxembourg's only French-speaking village a short journey from Differdange city centre, or the Fond-de-Gras railway park to step back in time and see turn of the century steam trains chugging back to life.