Luxury All The Way In India's Land Of Kings

Luxury All The Way In India's Land Of Kings

One place you should absolutely go 5-star is India, says TheLuxeTraveller, Karen Halabi, because frankly, doing it as a budget traveller can be a bit of a shock to the system. It may sound a little strange, but India is one place you don’t want to rough it. And why should you, when there are so many fabulous forts and palaces to stay in, especially in Rajasthan the magical land of the maharajahs?

A scenic drive through the Aravali Hills brings us to enchanting Udaipur, one of the world's most romantic cities, via a stop at the World Heritage-listed Jain temples at Ranakpur. 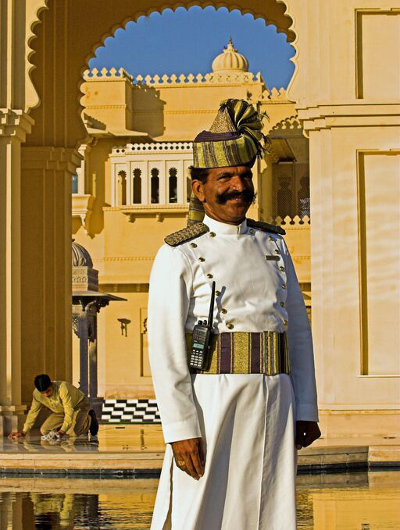 The hotel staff are ever attentive

A boat on the lake’s edge waits to take us across to the mesmerising white fairytale 18th Century Taj Lake Palace, which floats, like a mirage, in the middle of Lake Pichola. As we step aboard, moustachio-ed men in turbans and beautiful ladies in flowing saris throw petals.

"The Lady of the Lake" is a pearlescent white marble and glistens in the twilight. The view from the palace rooftop is ethereal.

The hotel has old-world charm, incredible coloured stained glass windows that look out over the water, and in each room a jewelled swing hanging from the ceiling. I sit there the next morning having breakfast and look out over the lake and the city beyond.

Described as India’s Venice, Udaipur is dotted with floating palaces and lakeside havelis best seen from the water. The lake and the City Palace (Jag Niwas) were the setting for scenes in the James Bond movie Octopussy.

The City Palace has numerous rooms walled in mirrors, ornate balconies, Moghul-style stained glass and elaborate mosaics. You can buy silver jewellery, colourful fabrics and Indian miniature paintings in galleries here or haggle in the many shops that fill the lakeside streets and bazaars just outside.

Next we head to Jaipur, the Pink City, world famous as a centre for the manufacturing, cutting and polishing of gems. Here, to see spectacular one-off antique necklaces, rose cut diamond bracelets and enamelled jewellery – the kind of thing you might see on Hollywood stars such as Nicole Kidman – we visit the Gem Palace and Muti and Sons, both on MI Road. 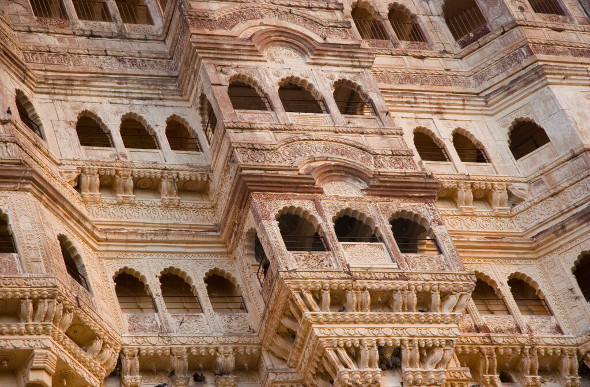 The splendour of Meherangarh fort

Jaipur’s City Palace has elaborate gates, crenellated walls and galleries featuring wonderful carpets, miniature Rajasthani paintings and old photographs of the maharajahs. Hawa Mahal, the Palace of the Winds, right next to the City Palace, is best seen at dawn. Its distinctive bright pink sandstone facade with 953 small windows (jharokhas) looks like a giant honeycomb.

Tea and temples en route to Darjeeling. Tea And Temples On The Road To Darjeeling

Some more places to take the royal treatment. The Royal Treatment: Stay Overnight In A Castle

Then we head out of town to see the Amber Fort, a vast hilltop complex that sits amidst stark desert hills. During a free afternoon we wind our way through the colorful markets at our own pace digging up bargains and watching traditional artisans work.

The Blue City of Jodhpur is best seen from Meherangarh, the spectacular hilltop fort that straddles a hill overlooking the town, providing the perfect bird’s eye view. 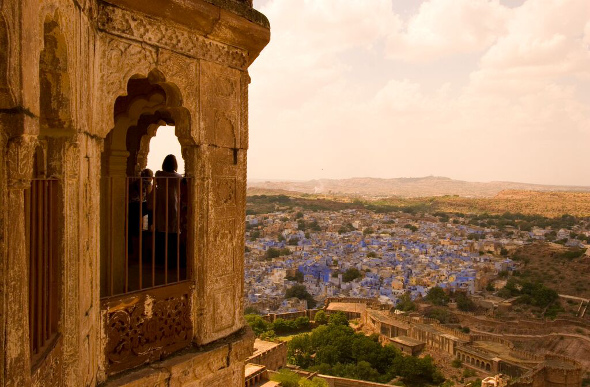 The famed Blue City of Jodhpur

It gets its name from all the houses painted a vivid iridescent blue that shimmer in the desert air (it’s said to keep them cool in summer and wards off mosquitoes).  The fort’s numerous rooms are filled with treasures and it’s another fantastic place to get an insight into the life of the Maharajahs.

Another place to do this is at Umaid Bhawan – the most photographed residence in India. The 14th Century domed palace has 347 rooms and is made of luminescent pink desert sandstone that turns to gold at sunset.

It perches atop Chittar Hill, the highest point in Jodhpur. The last of the great palaces of 'princely' India, the palace still serves as the principal residence of the Maharajah of Jodhpur who resides in one wing – it’s the only palace in the world where you can stay with a royal family still in residence.

The Lake Palace, Jai Mahal Palace and Umaid Bhawan are all opulent palaces that were once the domain of maharajahs but are now part of the Taj group of palatial hotels.

We see wildlife the maharaja way

Rajasthan literally means “Land of the Raj (Kings)” and many of the formerly grand residences of the princes and maharajahs of Rajasthan in northeastern India now operate as luxury hotels.

But luxury India doesn’t stop at palaces and forts.

In Ranthambore National Park we head off on a Rajput-style game drive as the Maharajahs did, seeing wildlife such as deer, wild boar and the Bengal Tiger before overnighting in The Vivanta by Taj Sawaii Madhopur Lodge, a luxury tented safari camp.

A 4WD journey into the Thar Desert takes us to Manvar Desert Camp, a beautiful semi-circle of deluxe tents in the dunes on the road between Jodhpur and Jaisalmer.

After a magical sunset camel ride, we watch the sun slip below the desert horizon and settle in for a night of live traditional folk music, dance and feasting.

As I said, why would you do India any other way?

Visit your local Flight Centre store or call 131 600 for more advice and the latest deals on travelling to Rajasthan.

Karen Halabi travelled 5-star on the ground courtesy of Travelscope Tours. You can book a luxury India experience through Insider Journeys, which runs Small Group Journeys in India.