Magnificent Munich Is A German Masterpiece

Magnificent Munich Is A German Masterpiece

Munich may well be one of the finest destinations in Europe. A stunning medieval city of cobblestone streets and picture-postcard views located in the shadows of the mighty Alps, it's little wonder Munich is regularly voted the most liveable city in Germany.

Munich’s breathtaking city centre is most visitors’ first introduction to the Bavarian capital. Dominated by the Marienplatz – the central square loomed over by the New Town Hall – it has been the city’s main square since 1158. Its primary attraction is the famous Glockenspiel which chimes daily, upon which a series of figurines appear on its two balconies and act out popular tales of Bavarian life. Nearby Frauenplatz is another of Munich’s famous squares, mainly because it plays host to the city’s beloved Frauenkirche. This red-brick cathedral, which towers over the landscape, is a revered symbol of the city. 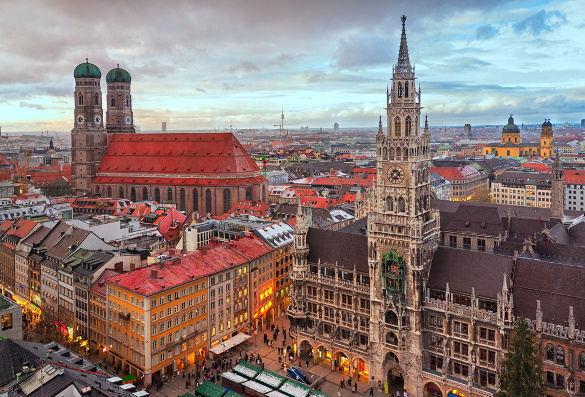 Take one glimpse of the countless pubs, bars and beer halls lining the streets of this laidback city, and it soon becomes apparent why Munich regularly tops the list of Germany’s most liveable cities. Beer has been brewed in the city since the early 1300s, and beer halls like the Augustinerkeller and Hofbräuhaus – not to mention the dozens of outdoor beer gardens dotted throughout the city – have given Munich a well-deserved reputation as one of the best beer-drinking cities in the world.

Of course, the city’s main claim to beer-drinking fame is for hosting the legendary Oktoberfest. Held every year from late September until the first week of October, this 16-day festival of revelry is world famous, attracting millions of visitors each year. Celebrated in one form or another since 1810, Oktoberfest is now the world’s largest annual fair – and without doubt, one of its most festive.

While Munich is rightly regarded as one of the best cities in the world to sink a stein or two, the city’s eclectic art scene attracts its own share of cultured visitors. Indeed, Munich has long been regarded as Germany’s unofficial art capital and its Kunstareal art district is home to several of the city’s most famous museums and galleries.

Along with the numerous galleries which make up Kunstareal, there are several more museums scattered throughout Munich. They include the BMW Museum – the Bayerische Motoren Werke is headquartered in the city – as well as the Deutsches Museum, regarded as one of the largest technical museums in the world. 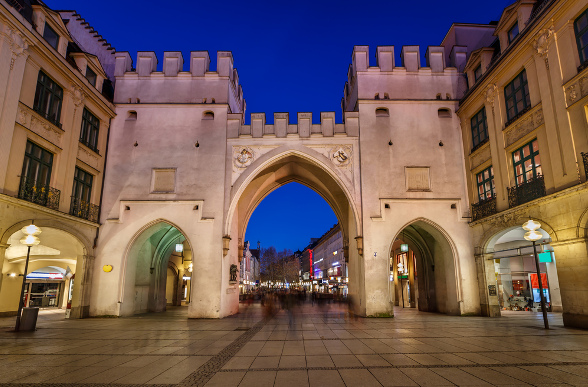 The Karlstor looms over busy Karlsplatz

Founded as München during the Middle Ages – the name relates to the Monks who first inhabited the region – Munich, to give the city its English name, was once surrounded by medieval city walls. Three of its gothic city gates remain, including Sendlinger Tor, Karlstor and Isartor – the latter named for the Isar river which meanders peacefully through the city centre.

The word ‘tor’ is yelled for entirely different reasons down at the Allianz Arena. It means ‘gate,’ but on the football field it also means ‘goal,’ and that’s something the mighty Bayern Munich score plenty of at their futuristic home. Bayern are one of the strongest clubs in world football, but Munich also supports a popular second team – the hapless 1860 Munich. Both clubs share the ultra-modern Allianz Arena, with the stadium’s high-tech exterior glowing red when Bayern are at home and blue whenever 1860 are in town.

In recent years Munich has collected the moniker of ‘Toytown’ for its clean streets and high standard of living, with many likening it to living in a fairytale. But while Munich is beloved for its old-world architecture and bountiful beer halls, it’s also a popular base for trips around the region.

The Austrian city of Salzburg is just a short drive through the countryside and across the border, while Bavarian favourites like Augsburg, Ingolstadt and Nuremberg welcome millions of visitors each year. A day trip to Füssen will bring you face to face with Neuschwanstein Castle – truly a fairytale setting, if ever there was one.