Make A Date With Macao

Make A Date With Macao

Long overshadowed by Hong Kong, its flashy sister across the Pearl River Delta, Macao is having its turn in the spotlight. Blessed with a long, rich history and a fascinating confluence of Chinese and Portuguese culture, this once sleepy backwater has drawn travellers for centuries, with the Jesuit missionaries and Portuguese colonists arriving early in the 16th century. Here in this tiny outpost – once the most important commercial and cultural crossroad between Europe and Asia – they found more than they expected. Scratch beneath the surface and today’s traveller does too.

The historic heart of Macao (aka Macau), granted World Heritage status in 2005, lies in sharp juxtaposition to the development that has rapidly sprung up around it. Streetscapes and piazzas, old Portuguese churches, temples, forts, and Moorish barracks sit side-by-side with high-tech skyscrapers, colossal shopping malls, concert halls and striking neon-lit architecture.

Macao’s unique mix of cultures and customs meanwhile is reflected in the form of Macanese fusion – the earliest known form of fusion cuisine. Macanese food, a blend of Portuguese, African, Southeast Asian and Chinese cooking, is having its turn in the limelight, while the arrival of internationally-renowned restaurant brands and celebrity chefs have taken Macao’s culinary scene to dizzy new heights.

Today Macao offers the best of old and new Asia. There’s the world’s highest Bungy jump, gondoliers serenading visitors along faux Venetian canals, Michelin-star cuisine, the bright lights of the Cotai Strip, luxurious spas and world-class shows. Turn a corner and narrow alleyways and cobblestone streets lead you through quaint villages, where flowers spill from planter boxes of charming pastel buildings; old men play a fiercely competitive game of mahjong in the street; and shopkeepers stop to gossip. You’ll scratch your head wondering whether you’re in Asia or Europe. 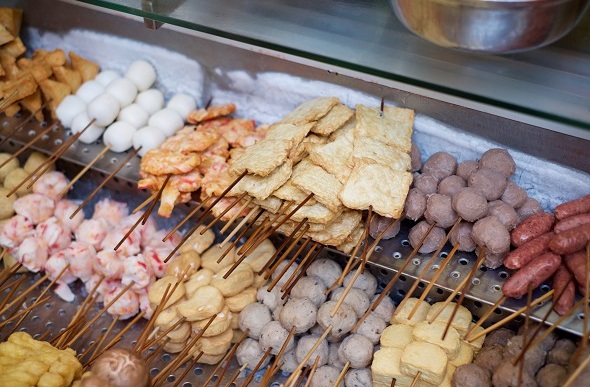 The street food in Macao can be just as good as the fine food. (Image: Getty)

Macao is one of Asia’s best-kept culinary secrets and offers everything from finger lickin’ street food to the giddy heights of fine dining. At a handful of places offering authentic Macanese cuisine, such as Restaurant Litoral, you can try the spicy African chicken and Portugese fried rice with tomato sauce and chorizo. The local dessert, Serradura – Mecanese sawdust pudding – is another must try.

Inside the lotus-shaped Grand Lisboa Hotel, goldfish-shaped dumplings and barbecue pork buns fashioned into adorable hedgehogs are the order of the day at the three Michelin-star Eight. The French fine diner and 3-star Michelin-star Robuchon au Dome is also found here on the 43rd floor.

In the quaint village of Taipa, the much-lauded António, run by larger than life chef António Coelho, is the place for traditional Portuguese fare. Over on the adjoining island of Coloane, a historic fishing village, crowds jostle for Lord Stow Cafe’s famous flaky Portuguese tarts, straight from the oven. Try stopping at one!

Macau Tower – the 10th tallest freestanding tower in the world – offers a bird’s eye view of the city, across to China. A glass-floored section in the observation lounge gives the impression of standing on thin air, yet is tame compared to what else is on offer. The more adventurous can take a thrilling walk around the main outer rim – 233m above ground – or do a white knuckle climb of the mast at 338m. Alternatively fling yourself off the tower on the world’s highest sky jump.

Over on Coloane’s international go-kart track complete with a 1.25km circuit, grandstand, control tower and children’s track. Take a spin on the Golden Reel, the first Ferris wheel in the world to move in a full figure eight, or time yourself on the fast flowing rapids of the world’s longest skytop aquatic adventure ride at Galaxy Macau (also home to the world's largest rooftop wave pool). At Studio City kids can take a ride on the thrilling 4D Batman Dark Flight. Or for a more sedate experience, let a gondolier serenade you as he poles you along man-built canals within the Venetian Macao. It’s naff but fun.

Macao offers multiple venues to take in a show. See the sexy spectacular Taboo and the blockbuster House of the Dancing Water, the world’s largest water-based show, at James Packer’s joint venture, the City of Dreams. Over at Studio City, the newest entertainment hotel precinct on the Cotai Strip, the recently-opened House of Magic, is packing in the crowds. It’s not David Copperfield, but nonetheless a thoroughly entertaining show by illusionist Franz Harary, backed up by a cast of dancers. Kids, meanwhile, can watch Shrek and the rest of the ‘DreamWorks Gang’ on stage at Sands Cotai Central. The ruins of St Paul are a popular destination not only for the history, but also the incredible views across the city. (Image: Getty)

No visit to Macao is complete without ascending the 68 stone stairs of the Ruins of St Paul, an early 17th century Jesuit church that offers terrific views over the city through its baroque facade. From there visit the A-Ma Temple, the Moorish Barracks and the fascinating Lu Kau Mansion, former home of a prominent Chinese merchant. Admire the two-storey brick courtyard house with architectural characteristics of a typical xiguan (Chinese residential building). Afterwards drop by the Tak Seng On museum, a preserved early 20th century pawn shop. 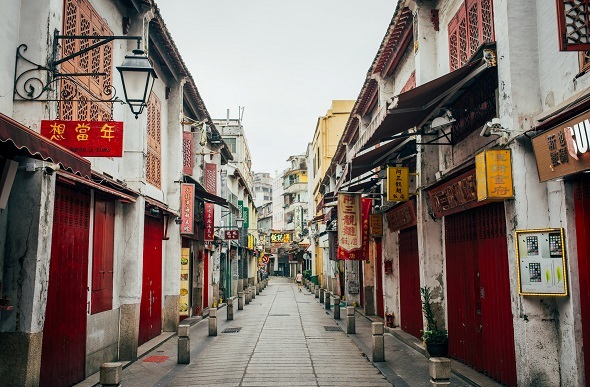 The traditional streets of the old town are a quiet reprieve from the busy city, and home to some of the best tea houses. (Image: Getty)

Many of Macao’s old teahouses are fast disappearing, however you can still seek respite from the bustling streets, and be guaranteed a pot of steaming hot tea at Long Wa Tea House. Tea and dim sum are served all day at this quaint upstairs teahouse near the famous Red Market with windows opening on to the street below. In days gone by men used to bring their pet birds in cages to socialise and have tea. The Macao Tea Culture House, housed in a neo-colonial mansion adjacent to the serene Lou Lim Ieoc Garden, is a museum dedicated to the history of the tea trade and the Chinese tradition of tea drinking. 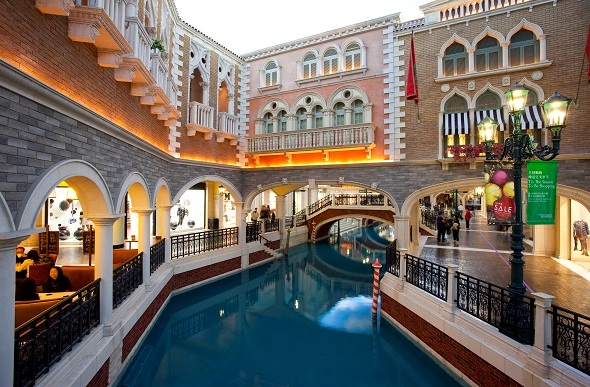 The Venetian Hotel has an astounding 650 retail stores along its canal streets. (Image: Getty)

Everything from high-end brands to antiques and electronics are on offer in Macao. The Venetian Hotel offers 650 brand names along its maze of ‘streets’, Studio City features a cast of luxury high-end stores, while the city’s historic heart near Senado square offers everything from shoe shops, fabric and book stores, to clothing outlets, antiques and tea shops. Rua da Felicidade, made famous by Indiana Jones and the Temple of Doom, offers shops selling dried beef, sugar cane, snakes and other traditional Chinese delicacies.

The Grand Prix Museum displays more than 20 racing cars famous for being driven by world-class drivers, electric-operated motorcars and accessories related to the Macau Grand Prix. The Museum allows visitors to retrace the history of car racing and view memorabilia of top drivers, such as the late Ayrton Senna. Afterwards step across to the Wine Museum, the only known museum in the world dedicated to the subject of Portuguese wine. 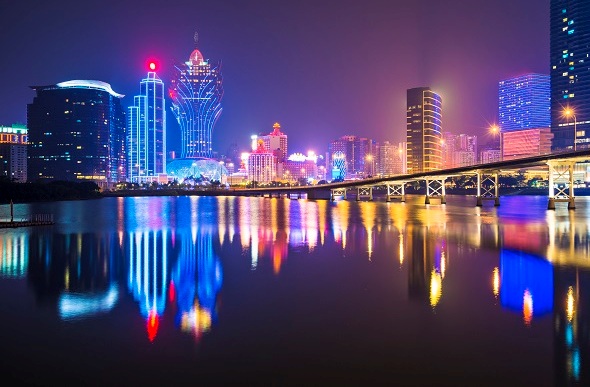 Come dusk, Macao lights up in spectacular fashion. The Grand Lisboa in the city’s central entertainment district is famous for its showy lights. Cross the road for the hourly Water Fountain Show at the Wynn Hotel. Studio City, Galaxy Macau, and in fact the entire Cotai Strip, dazzle with their flashy neon lights come sundown.

Visit your local Flight Centre store or call 131 600 for more advice and the latest deals on travelling to Asia.

Sheriden Rhodes is a travel writer and photographer who travels the globe with her frequent small flyer, Ella. 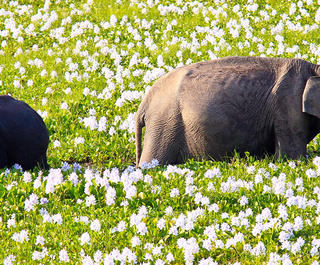 Why You Need To Go On Safari In Sri Lanka
20 January 2020
Flip the script on the traditional safari experience by going wild in Sri Lanka where you’ll find some of the densest concentrations of leopards and
Read Time: 1.6 mins
Asia

Follow The Cool Kids To The Ski Holiday Hotspots Of Japan & South Korea
13 December 2019
Japan has really taken off as a holiday hotspot for Aussie travellers in recent years, shifting from a seasonal to a yearround destination, thanks to
Read Time: 2.4 mins
Asia

Geisha Spotting and 300-Year-Old Teahouses: An Evening In Kyoto
4 December 2019
Japan is an enigma – a thoroughly modern society rooted in traditions and handicrafts that date back thousands of years. Some traditional rituals and
Read Time: 2.2 mins
Asia

Why You Need To See Sunrise At Angkor Wat Right Now
27 November 2019
We arrive to Angkor Wat in total darkness, unable to see anything beyond what our phone torches illuminate. We follow a guide to the base of the
Read Time: 2.1 mins