There is something vastly humbling about standing in the precise place where a nuclear explosion occurred. It does not take me long to find the Hypocentre Park in Nagasaki, but it takes me a few minutes to come to terms with the magnitude of this location.

Right here, at 11.02am on Thursday 9 August 1945, an atomic bomb did its dirty work. In doing so, it effectively ended the Second World War, while reaping a body count that may have totalled 80,000.

This was, perhaps, the most decisive moment of the 20th century. And yet it is also treated as something of a footnote. 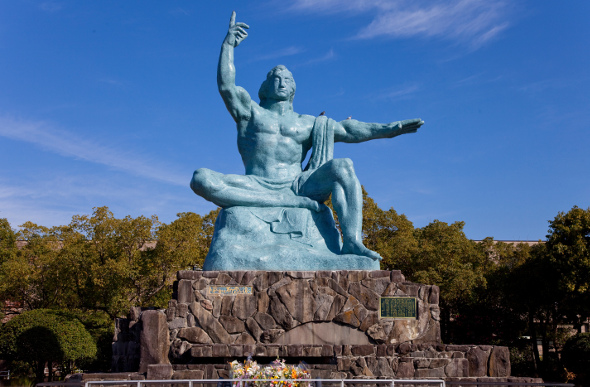 A giant figure gestures at the heavens (images: Getty)

The tale of Japan's downfall in the summer of 1945 usually focuses on the destruction of Hiroshima – the victim of the first A-bomb dropped in anger, three days earlier on 6 August.

That unprecedented move caused the deaths of around twice the number of people, and came wrapped in the stark shock of the new. Nagasaki was "just" the sequel.

Yet the 70th anniversary of the event was remembered just as solemnly as ever during the city's yearly Peace Memorial Ceremony.

Those who visit Nagasaki, Japan's most westerly city (pinned to the left flank of Kyushu, the third largest and most south-westerly of the four main islands of this archipelago nation), will encounter plenty of landmarks relating to the bleak events of seven decades ago.

The atomic bomb sites are tucked two miles north of the harbour – where the blast was partially contained by the ridges of the Urakami Valley (this spared some of the city to the south). 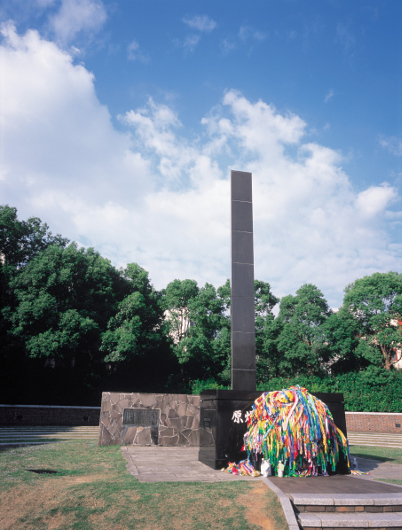 The Hypocentre Park (in the Matsuyamamachi area) identifies the exact ground zero with a simple black column of granite – while a towering statue of a mother cradling her dead child needs no explanation.

Adjacent, the Peace Park also uses sculptures and installations to make its quiet point, notably a huge bronze figure crafted by Japanese artist Seibo Kitamura – which gestures at the heavens.

Yet, visitors will also unearth a place that has shown remarkable resilience, emerging from the rubble and ash as a dashing metropolis where intriguing restaurants, galleries, shops, and bars abound.

Most notable as a symbol of resurgence is the Nagasaki Prefectural Art Museum (admission free, exhibitions Y400/A$4.50) – a dramatic cultural space of glass and light which opened on the waterfront in 2005 and was designed to the vision of Japanese architect Kengo Kuma.

August 1945 may have defined Nagasaki, but August 2015 is alive and well in its maze of streets.

See one of Japan's most stunning castles. The Beauty Of Himeji Castle

The Premier Hotel Nagasaki, opened in 1990, and salutes Nagasaki's more distant past through lacquer panel paintings in the lobby of Portuguese ships arriving in 1543 (the first European vessels to reach the city).

But its chief appeal is the view it proffers – south to the port and the railway station, where sleek shinkansen (bullet) trains slip silently out of town.

To understand why Nagasaki was a target in 1945, you have to peer into the 19th century – and the era that made it a whirring cog of Japanese industry.

The most obvious relic of this time is Hashima, an island lurking nine miles south-west of the city. It was the portal for under-sea mines which were in operation between 1887 and 1974.

Its abandoned staff quarters are so evocative that they inspired Javier Bardem's villainous lair in the Bond film, Skyfall. Gunkanjima Concierge offers two-hour visits with ex-miners as guides. 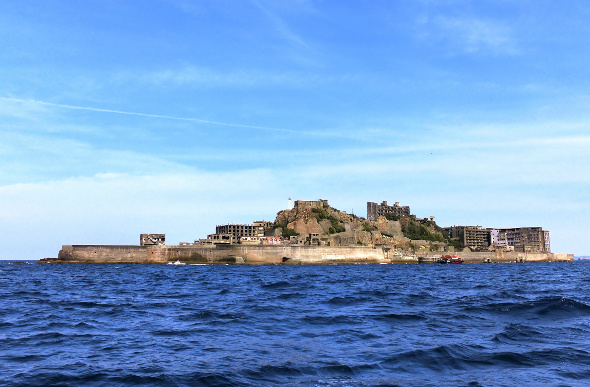 The island of Hashima

Hidden in Suwamachi, a district of Shinto shrines and visible heritage which survived the bomb, Ichiriki serves fare which reflects the ingrained effect of Dutch and Chinese merchants on this key port – dishes are as varied as chicken pie, braised pork and sweet red bean soup.

Café Olympic in Hamamachi deals in 21st-century fare, including the pork katsu curries that are so popular in Japanese restaurants in the West.

Step uphill into the Maruyama district and seek out Psy Bar – a watering hole slotted into a low-slung home where centuries seem to mix. You have to remove your shoes to enter, but you can sip glasses of Japanese Suntory whisky and decidedly non-local (but fine) caipirinhas.

Once you've dipped into Nagasaki's past, venture into its present. Pitched at the heart of the centre, the Hamanomachi Arcade is the city's main retail space – a grand mall boasting 700 stores.

Here, Hama Cross 411 deals in of-the-minute fashions and chi-chi bags, while Tasaki is a popular jeweller that specialises in pearls – pale bracelets and delicate necklaces. 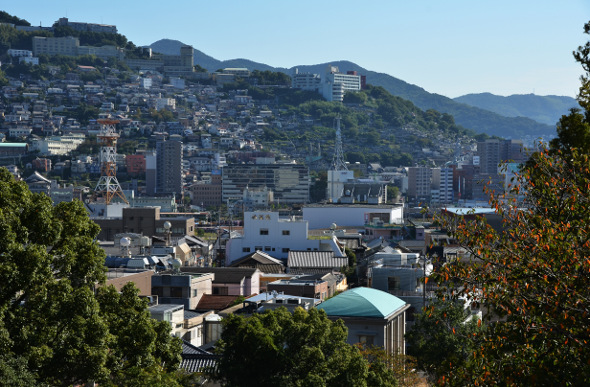 A new, confident and resilient Nagaski has arisen from the ruins

The Nagasaki Atomic Bomb Museum, in Hiranomachi, picks through the wreckage of 1945 – via exhibits as striking as ceramic plates fused together by heat, and a wall clock frozen at 11.02. Analysis is a little one-sided, but the museum is nonetheless very moving.

Opposite, the Nagasaki National Peace Memorial Hall pays tribute to the dead using a moving space of green glass.

Visit your local Flight Centre store or call 131 600 for more advice and the latest deals on travelling to Nagasaki.