Skyscrapers And Shorelines In Dubai Marina

Skyscrapers And Shorelines In Dubai Marina

First-time visitors are often surprised to discover that beyond Dubai's atmospheric, creek-side bazaars and rows of skyscrapers leading up to tallest-of-them-all Burj Khalifa lies yet another dense cluster of ultra-high architecture shimmering like a mirage in the distance. That waterfront city within a city, known as Dubai Marina, is finally coming into its own after years of seemingly endless construction work.

There is still building going on — this is a never-stop boomtown after all — but now is the best time yet to romp through this multicultural urban playground, even if you've never set foot on a yacht. Like so much of Dubai, famous for its palm tree-shaped islands and indoor ski slope, the Marina is a man-made creation that challenges preconceptions of what the Middle East looks like.

Chances To Gawk At The High-End Yachts

Hewn out of the desert and connected to the Persian Gulf by channels at each end, the 3.5-kilometre, U-shaped canal would be an engineering marvel even without its skyline. Six of the world's 10 tallest residential buildings are clustered in one Manhattan-like corner. They include the 101-storey Princess Tower, Dubai's second-tallest skyscraper after the Burj Khalifa, and the arresting Cayan Tower, which elegantly twists 90 degrees from bottom to top. 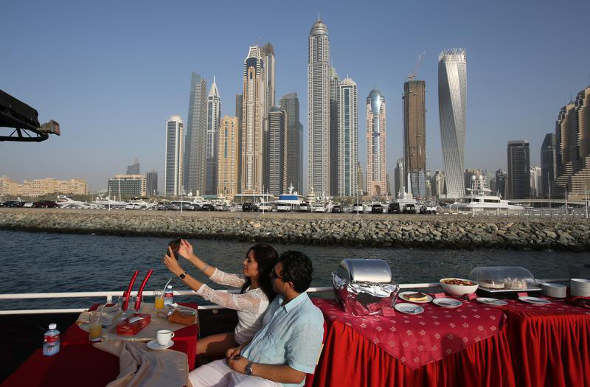 You can even eat afloat

An eatery-lined walkway winding along the canal provides plenty of chances to gawk at the high-end yachts on display. The Marina's design as an inland harbour cleverly leaves room for a full sandy beach along the Gulf shore itself.

New shops, cafes, food carts and beach lounges have transformed the palm-lined beach. Get there early to take advantage of the public running track and workout equipment before the midday heat makes exercise unbearable.

The Marina is a treat for culinary explorers. Reem al-Bawadi, arguably Dubai's best-known Arabic restaurant name, draws mezze and mixed grill fans to a branch with a commanding waterfront view at the northern end of the Marina. The humbler Geddy specialises in Egyptian comfort foods like fava beans spiced with cumin, and the filling hodgepodge of macaroni, lentils and rice known as kushari.

Middle Eastern food isn't your thing? There are plenty of Indian, Italian, Japanese and Mexican options, and even Romanian, Russian, Thai and Turkish ones. Americans missing a taste of home will find a surprising number of US outposts, from Krispy Kreme to P.F. Chang's.

Amazing things to do at Atlantis. 7 Amazing Things You Can Do At Atlantis, The Palm Dubai

And it needn't cost the earth – or anything at all. Top Free Activities in Dubai

Plenty To Keep The Little Ones Occupied

A balcony-ringed turret rising from the water, known as Pier 7, offers, as the name suggests, seven different restaurants stacked one atop the other. One worth trying is The Scene by British celebrity chef Simon Rimmer, which serves prettied-up pub grub and a surprisingly good range of lagers and ales in a funky and airy jumble-shop-style space. 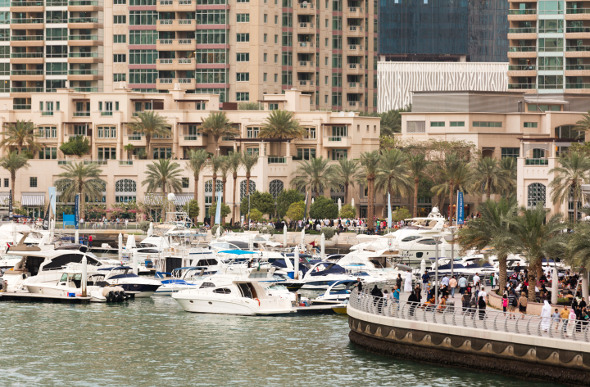 There's plenty to keep little ones busy outside, like the quayside playgrounds tucked neatly underneath bridges spanning the Marina. Overheated kids can douse themselves in sidewalk fountains that send spurts of water jumping out of the ground, then dry off while spinning on an old-fashioned merry-go-round nearby.

There is also Splash Pad, a toddler water park by the beach that runs 60 dirhams (about $A21) an hour, and a floating playground that includes inflatable slides and trampolines for 50-70 dirhams ($A18-25), depending on age. 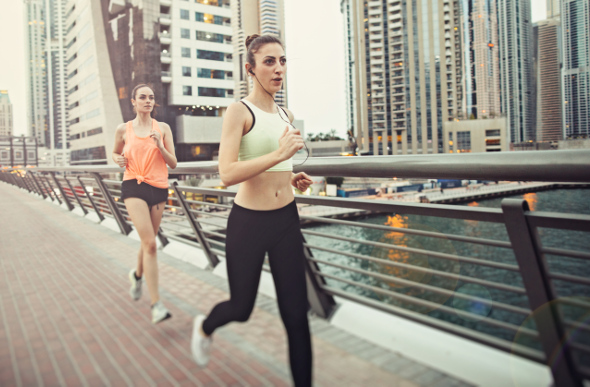 Room to run in the Marina (image: Getty)

The Marina is unusually well-served by public transport, especially by car-crazed Dubai standards. The driverless, mostly elevated metro system makes two stops along the edge of the Marina.

From there, visitors can connect via air conditioned platforms to a tram line that opened in November. It loops around the Marina and snakes past hotels along a coastal road, with stops that include one connecting to a monorail that runs up the centre of the famous Palm Jumeirah island.

City-operated ferries link the Marina with the charming creek area at the heart of old Dubai (50 dirhams one way). Those with a lot more cash to spend can charter a water taxi, party barge or even one of those polished white yachts bobbing among the skyscrapers.

Visit your local Flight Centre or call 131 600 for more advice and the latest deals on travelling to Dubai.

This article was written by Adam Schreck from The Associated Press and was legally licensed through the NewsCred publisher network.

Adam Schreck heads up The Associated Press's operations in Dubai.
more articles from this author