Imagine your favourite Riviera resorts magically transported to a South Seas paradise where 300 tribes speak mutually unintelligible languages yet all master perfect French. It’s a getaway as far from France as you possibly can get but our first days in Noumea, its winsome sun-drenched capital, gloriously redeem every kilometre we've flown.

New Caledonia’s Grand Terre, girdled by reefs rivalling Australia's and the world's biggest coral lagoon, has more palm-fringed bays and beaches than would fit in a dream.

Cook stepped ashore in 1774 but the first settler was James Paddon, a British entrepreneur. In 1843 he set up a bustling port. France grabbed the island in 1853 but the indigenous Kanaks proved fearsome foes.

The French bought Paddon’s safe haven for 40,000 gold francs. While traces of Noumea’s British genesis remain, today it feels as French as Pernod and as bubbly as Champagne. The enticing lanes of colonial-style buildings may not at first glance resemble haute couture Paris but you could, we discover, spend just as much.

Where cricket is a feminine pursuit 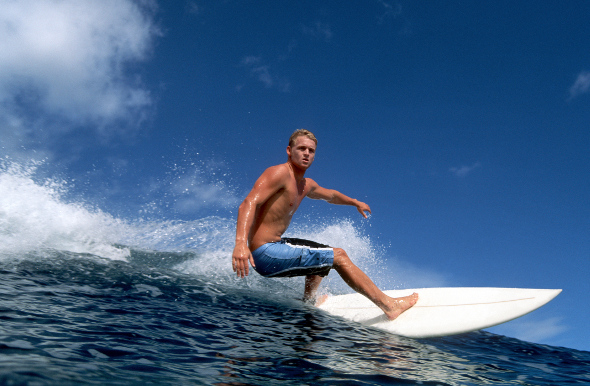 It could be anywhere in France but for the laughing Kanak women discussing their twin passions: bingo and cricket. Of the remaining cultural chasms between Kanaks and Gauls, none is more profound than cricket.

British missionaries tutored the tribes; their star pupils were women. Each team of 13 players use carved branches for bats; balls are formed from fresh-tapped rubber. Twenty-six ladies in ankle length gowns exuberantly prove that cricket is queen.

The garden's ornate bandstand dates from 1859 but its golden era dawned in 1942 when the US made the island its Pacific War headquarters. Famous big bands entertained a million troops.

It was the real life South Pacific. Kanaks fought bravely alongside the Free French. Eight served as British SAS. The gripping story is told in the Second World War Museum.

We begin most mornings at the Port Moselle market. Parts resemble harvest festivals of every plant that grew in Eden.

The seafood pavilions are aquatic cornucopias. Among the iridescent shoals monster crustaceans audition for horror films.

The stalls are paragons of Brussels hygiene regulations. We're 16,000 kilmetres from Paris but this is still France. New Caledonia gleams.

The UNESCO site reef nurtures an extraordinary diversity of marine life. Scuba trails navigate the gem like coral islands in Noumea’s six bays.  In the Lagoon Aquarium we rub noses with turtles, giant rays and sharks.

This is New Caledonia's sybaritic best: the island depicted in the cruise-ship brochure How to Spend Your Two Hours in New Caledonia. But our next objective is nothing less exotic than a land called Hoot ma Whaap. After that comes the world’s end. They really do exist

The RT1 highway arrows 320 kilometres north between high verdant mountains and the bay-frilled west coast. The west is cowboy country; cattle graze savannahs; rodeos are advertised. Villages blaze with tropical blossoms yet seem so perfectly French that they might have been airmailed ready-manicured from Picardy.

Yet the best is still to come. Every hairpin east across the central chain switchback – peaks and river valleys; lakes and dense forests – reveals ever more spectacular views. Nearby there may be cajous, the endemic flightless birds recently adopted as the island's symbol. Laying one egg per year, their reproductive parsimony has hastened their decline to around 1,000 pairs.

The dramatic east coast corniche, ducking and diving between headlands and coves, was carved from the rock in 1968. Waterfalls plunge from jungle green mountains; crystal-clear rivers reach the lagoon. We cross one by ferry – the first vehicle that day.

The very place for romance. Enjoy The Perfect Romantic Getaway In New Caledonia

Now we know why Cook gave it that name

Roads are good, fast and empty. We sometimes drive 30 kilometres without seeing another car. When we do, the driver waves. In Kanak country everybody waves. You always reciprocate. It's another tribal custom: a welcome to their territory up to a point.

The snow-white churches are engulfed in the flowers all Kanaks love. Children having lessons under a tree ask where we're from; shyly try a little English. Many are from different tribes; their only common tongue is French. 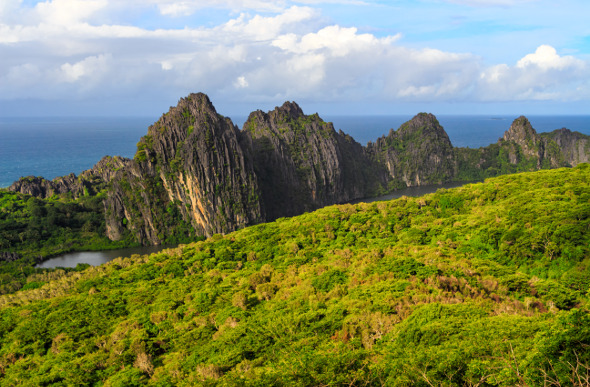 This is Hoot ma Whaap. Its loch-like bays and soaring cliffs make you realise why Cook called it New Caledonia. Some tribes offer simple lodging; they'll make you a bougna: a celebratory dish cooked in pit ovens.

The mountain is home to darker gods

Yet our most memorable trip is on the new long-distance path along the island’s mountain spine. From Tiwea we climb through tropical forest scarcely changed since prehistory.

Nothing breaks the silence but streams and shrieks of birds. At a strange high-level clearing both coasts come into view.

Enigmatic symbols are carved into trees; animal skulls dangle from boughs. Kanaks are Christians but in this eerie outdoor temple ancestral gods survive. 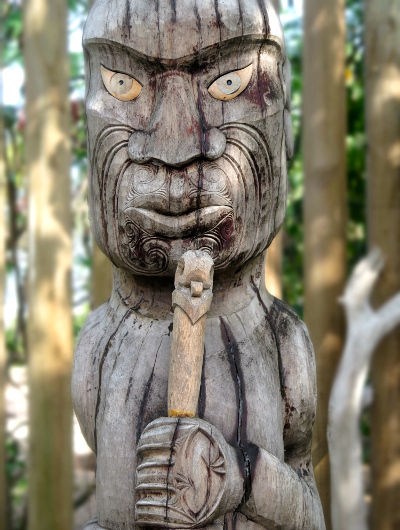 We feel like foreign intruders in a sanctum sanctorum. At this height it's quite chilly. Probably explains the shiver down my spine.

In the sleepy hamlet of Ballade, a pillar marks where France annexed the island. The Kanak plaque beside it states they took it back in 2011.

Yet nothing indicates the place where we plan to picnic – the very spot the Yorkshire navigator clambered ashore in 1774. Cook's Bay’s crescent shell-strewn beach appears unmoored from time. Not one footprint marks the sand.

With sun-drowsy eyes it's easy to imagine the Resolution just off shore – its crew’s jubilation at the scene that still resembles a vision of heaven.

We stroll the shore in velveteen darkness

The Grande Terre's final fling is rugged and treeless. Wild horses roam; electric blue butterflies spangle the air. After 32 kilometres of dirt road, we reach the inn at the end of the world, the Relais de Poingam – seven palm-thatched bungalows of lovingly contrived luxurious simplicity.

The washbasins are conch shells; the solar-heated bamboo showers are open to blue sky. Between our terrace and Japan are 8,000 kilometres of ocean. Now we know why they call it Le Bout du Monde.

Everything we eat comes from the potager, was caught from the beach or bred on the farm. Dinner first night is lagoon fresh lobster, suckling pig roasted over coconut embers and cognac-laced banana and papaya creme brulee.

In the velveteen darkness we stroll on the shore. The Southern Cross shines brighter than in a planetarium. Never have we felt more like Robinson Crusoes.

The World’s End, I can report, is a very more-ish place.

Visit your local Flight Centre store or call 131 600 for more advice and the latest deals on travelling to New Caledonia.

This article was written by Ray Kershaw from The Daily Telegraph and was legally licensed through the NewsCred publisher network.

Ray Kershaw is an award-winning travel writer and broadcaster with a lifelong love and in-depth knowledge of France.
more articles from this author