An Emotional Finish At The New York City Marathon

An Emotional Finish At The New York City Marathon

The weekend of the TCS New York City Marathon is something to be experienced, and not just by the runners. The entire city is buzzing and the excitement that builds in the air as marathon morning draws closer is something like waiting for Christmas to arrive.

Anyone who has yet to tick off their first marathon also hasn't experienced 'the night before'. That's when you insist you’re going to get sleep early, lay out all your clothes for the morning and try to be as organised as you can only to find you stay awake for 80 percent of it wondering what the following day will bring. 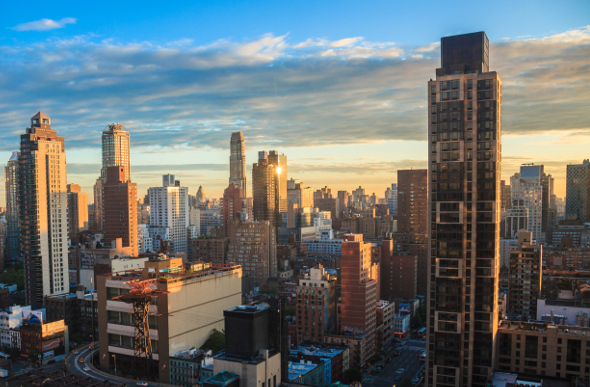 Strictly speaking, I’m one to go for a glass of red before I hit the sack. I find it calms the nerves and helps me get a good night’s rest before the marathon.

I can’t say it’s the professional’s advice, and may not work for everyone, but it hasn’t failed me yet, so I plan to keep that tradition for many runs to come. For others a pasta carb-loading dinner and a cup of tea before bed seems to do the trick just fine.

Marathon morning is a mix of emotions for everyone with plenty of nervous chit chat, excitement, and discussions on the lack of sleep we all got the night before. Everyone on the transfer bus to the Staten Island has their own story and their own reasons for ticking this one off their bucket list, but when we reach the start area deeper thoughts about the run became evident.

Most runners stop talking, preferring to take a moment of silent pep talk, think about why they’re wearing a race bib, consume last-minute nutrition and tackle the never-ending queue for the toilets. 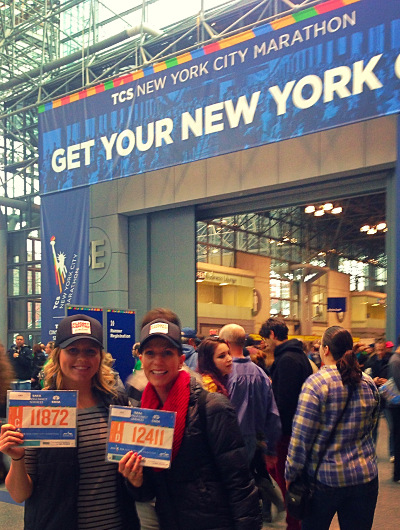 As the start waves are called excitement builds again, and before I know it I’m running in the New York City Marathon. The enormity of it doesn't hit me until around the 20 kilometre mark, which is when the emotions kick in and I drop a few happy I-can’t-believe-I’m-doing-this tears onto the road.

The weather is particularly harsh, but that doesn’t stop spectators lining the streets and supporting all the runners. Whether it’s with words of encouragement painted on signboards, bands playing lively music along the way or people handing out bananas and lollies to keep us going, not one single runner goes unsupported.

Likewise, it's apparent every competitor has a deep appreciation for those on the other side of the fence. They keep us going in the darkest moments on the run and have a knack of making me feel like I’m in an appreciation parade rather than a marathon. 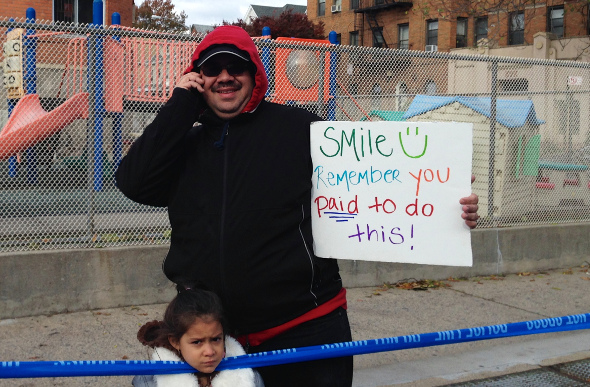 I couldn't help but do exactly what the sign said

Learn how you can run the marathon. Breathe In Deep For New York's Annual Marathon

Inside tips for sightseeing after. Big Apple Advice: Insider Tips On NYC

The hardest part for me by far is the Queensboro Bridge (Normally when I tell this story I refer to it as "that freaking-long bridge", but I know that won’t help any future runners figure out exactly which of the five bridges on the course I’m talking about.). It seems never-ending and is one of the only parts without the encouragement of the crowds, so feels very lonely despite the thousands of other runners hitting it at the same time.

Some emotional relief is given when I pause for a quick stretch just as a fellow runner stops to propose to his girlfriend. It's a beautiful moment that makes me forget for a brief second I still have plenty of kilometres to go – a good break for mind and body.

The upside to the Queensboro Bridge part of the run is at the end when I experience one of the coolest moments, coming out to screaming supporters filling the streets and anticipating the exit of all the runners. And just like that I’m filled with the buzz of the marathon once more. 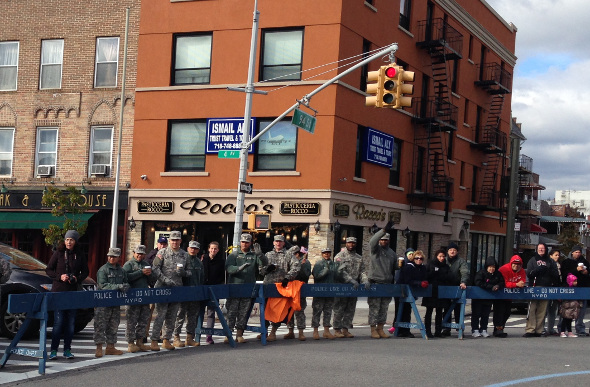 US soldiers show their support for the runners

Hitting Central Park doesn’t provide me with the exact reaction I anticipated. Knowing it’s almost the end I figure I will be ecstatic and pretty much skip in a land of happiness all the way to the finish line. Clearly, I don’t consider the pain my body is in by that point and those last three kilometres feel like I’m doing the first 39 all over again.

I must look like a 96-year-old lady hobbling to the bus stop, but I try to make myself believe I still possess the speed and grace of the Road Runner. Who am I kidding. It hurts. And I’m not sure that finish line is ever going to arrive.

I begin to think that all the people on the sidelines telling me it’s the last kilometre are diagnosed compulsive liars and silently plot the death of every single one. That is, until I finally see the finish line, in all its beautiful ending glory. I mentally apologise to the spectators I'd hated minutes before, take a deep breath and realise this is it.

The song they play when I cross the finish line is one I’ll never forget: Don’t Stop Believing by Journey. To this day it can still make me emotional when I hear it.

My legs wobble like jelly, but the smile on my face hurts my cheeks so much it takes my mind off the pain in the rest of my body. As I cross that line I let out a very impressive swear word, mentally high-five myself and cry. Happy, relived, proud, painful and emotional tears soak my cheeks.

We've got that finisher's smile and a medal to boot

The thing about marathon running, no matter if it’s your first or fifteenth, is that you never cease being amazed at yourself. At what your body is capable of, how your mind can talk you through anything and at how much stronger you are than you ever thought possible.

I really love myself in the days following a marathon. I will admit it loud and proud. Not in a conceited way, just in a my-body-and-my-mind-is-a-machine way.

Even the pain is one that, in a warped way, I love. Not because it’s fun to crawl up a flight of stairs because my legs hurt so much, or struggle to bend my knees for a few days just trying to get my pants on, but because it’s glory pain. It’s a you-earned-it pain; the kind you can appreciate.

Whether you’re reading this as someone who has never run a marathon, are considering doing their first or who has done many, it’s important to remember your experience will be your own. I have never been a runner and spent many years avoiding it wondering what the thrill was to hit the pavement running for hours on end. 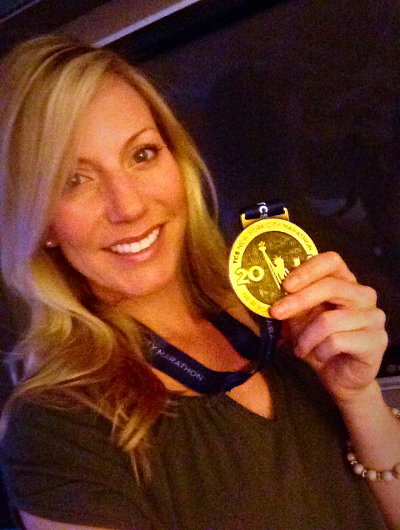 But I get it now. I still don’t go out every day and use it as a form of meditation like many people swear by – a good bottle of red will happily do the trick for me – but I appreciate the amazing sense of achievement you feel after those 42 kilometres.

I may not be the fastest out there or understand the "lingo" in terms of which muscle groups are causing me grief – I’m more of a my-leg-hurts girl rather than "I tore my ITB", whatever that is – but I know there isn’t much in the world that’s ever going to replace the day my legs took me on my own personal journey of New York City and turned me into a marathon runner.

Alexis Daly is an Active Travel specialist, combining her love of health & well-being with her passion for travel. Whether its hiking off the beaten path, or experiencing world famous marathon's, she lives by the phrase 'dont run away from challenges...run over them'. You can read more about her travels on her blog (http://dalytravelsblog.blogspot.com.au/).
more articles from this author