Whether you’re into scuba diving, boating, fishing, kayaking or surfing, there’s plenty of ways to get wet in New Zealand, renowned as one of the world's adventure capitals.

No matter what side of the country you end up on, there's usually something just off shore waiting to be tapped. Here’s our pick of the top places to soak up the action – on, above and below the water. 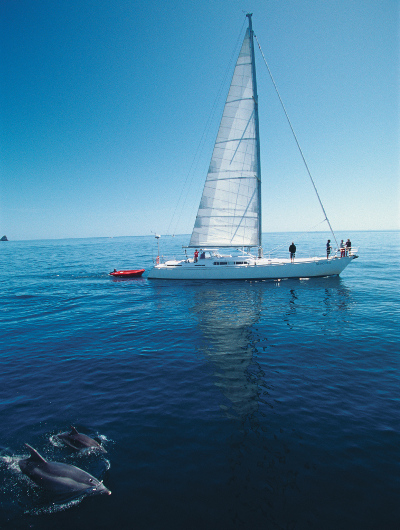 With more than 15,000 kilometres of coastline and harbours dotted with islands, New Zealand is the perfect place to hoist the mainsail and shout "ahoy".

Good places to start are Auckland’s Hauraki Gulf and the Bay of Islands. Crewed voyages range from a leisurely cruise on an historic square-rigger to several days on an ocean-going maxi-yacht.

Take the helm of an authentic America’s Cup yacht on Auckland’s Waitemata Harbour for the ultimate sailing thrill with Explore tours.

2. Ferry Across The Water 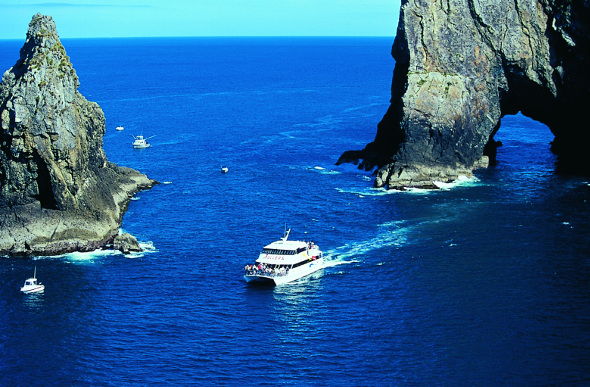 Cruise the sparkling waters of Auckland’s Waitemata Harbour by ferry

For a more sedate water exploration, cruise the sparkling waters of Auckland’s Waitemata Harbour with Fullers ferries and learn about the city’s best-loved landmarks with commentary from the knowledgeable crew.

As well as a brief stopover at volcanic Rangitoto Island, highlights include views of the Harbour Bridge, the city skyline, Devonport’s historic naval base and Bean Rock Lighthouse.

The harbour cruise includes a free ticket to Devonport, which can be used anytime. Hop across and spend time exploring shops, cafes and galleries. 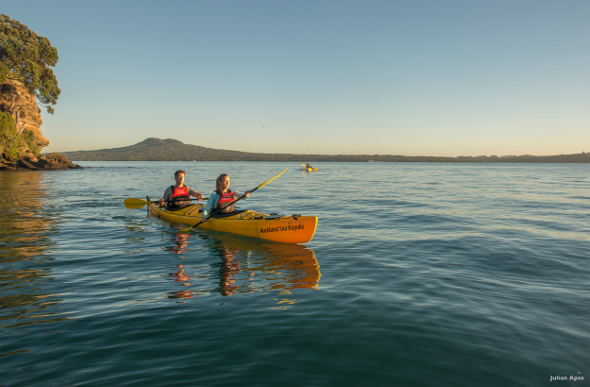 Kayaking is an excellent way to really explore New Zealand’s magnificent coastline and inland waterways. Paddle out with the dolphins from the sheltered waters of Auckland’s Waitemata Harbour to the spectacular volcanic Rangitoto Island.

Hike to the summit of Auckland’s youngest volcano before watching the sunset over the Waitakere Ranges. The Auckland Kayak Trail abounds with Maori culture from Omana Regional Park near Maraetai to Waharau Regional Park in the foothills of the Hunua Ranges. 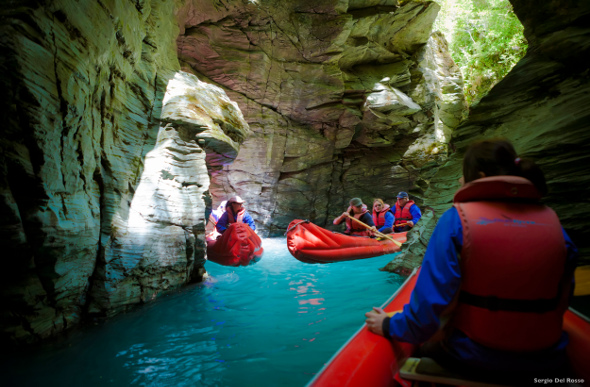 Board an inflatable ‘funyak’ on the Dart River

Board an inflatable ‘funyak’ canoe and drift downstream into the heart of the world-renowned Mount Aspiring National Park to Paradise and on to Glenorchy on the shores of Lake Wakatipu, near Queenstown.

Funyaks, available from the Dart River adventure company, are safe and easy to paddle. Explore the hidden streams, rock pools and dramatic chasms of the South Island’s magnificent Dart River; then travel the backcountry route visiting some of the famous filming locations featured in The Lord of the Rings movies. 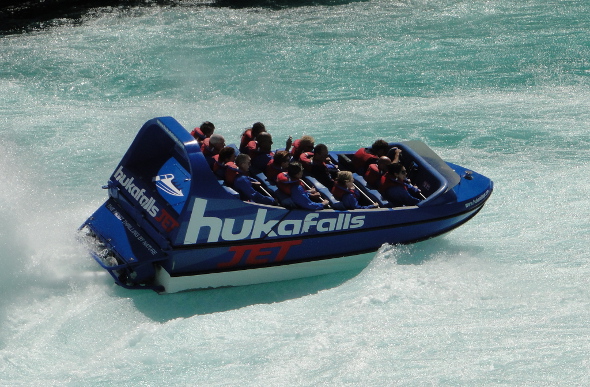 Jet boating is a uniquely New Zealand invention. Marvel at the water-level views of the spectacular Lake Taupo on board the Hukafalls Jet, while torpedoing down the river to play in the tail of the mighty white water of Huka Falls – the closest you can get without actually going down the falls.

Get ready for the trademark heart-pumping turns and 360-degree spins. Lake Taupo is New Zealand’s largest lake and is about the size of Singapore.

Love to surf? Catch A Break Off Muriwai 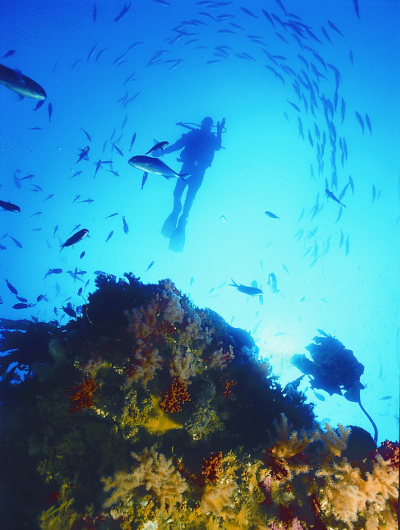 The late undersea explorer Jacques Cousteau once said the Poor Knights Islands Marine Reserve, off New Zealand’s Bay of Islands, are one of the world’s top five diving locations.

Explore huge kelp forests, swim with school fish or alongside dolphins. Learn about Maori history, the world’s largest sea cave, and the tuatara, the world’s only living dinosaur. 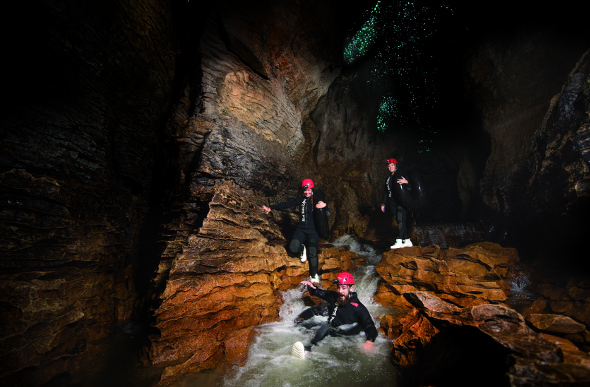 Float through the Waitomo Caves on a rubber tube

Under the green hills of Waitomo near Hamilton, lies a labyrinth of caves, sinkholes and underground rivers. The cave walls are also covered with galaxies of glow-worms and stalactites and stalagmites formed over centuries by dripping water.

The easiest way to see the caves is on a boat tour, but for a more adventurous experience try black-water rafting and swim and float through the caves on a rubber tube, or abseil or zip-line through the darkness.

8. Soak Your Cares Away 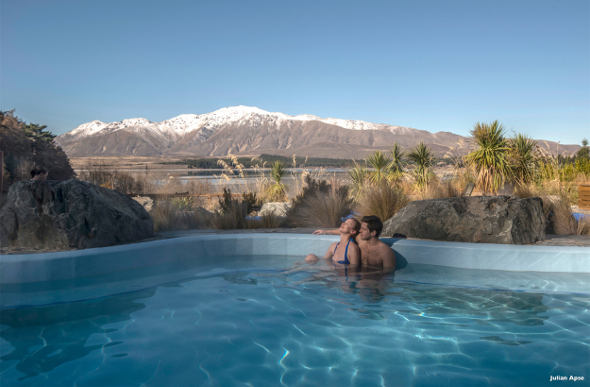 Located at the juncture of two tectonic plates, New Zealand has a large amount of geothermal activity, with warm water bubbling up through the earth to form hot pools. Locals have enjoyed these soothing pools for centuries, some believing that sitting in mineral water helps with medical problems.

Others simply enjoy the luxurious feeling of naturally heated water helping to relax weary bodies. For the experience of bathing in heated glacial waters, head to Tekapo Springs, about three hours’ drive from Christchurch.

9. Punting On The Avon 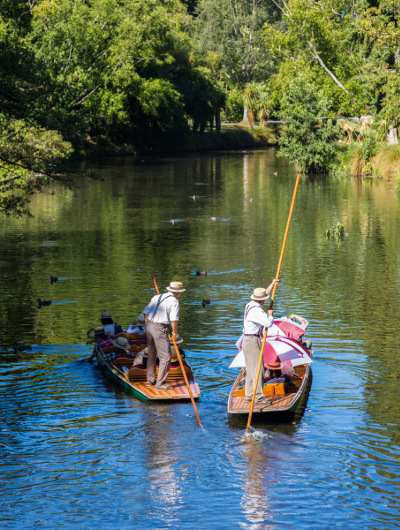 Punting refers to what has become one of the most iconic sights in the Christchurch region: a Venice-style gondola trip down the Avon River’s serene waters.

Step aboard a classic-style punt boat – a flat-bottomed boat pushed along by a pole. Accompanied by a pilot in full Edwardian-themed clothing, you’ll head on a leisurely romantic cruise past some of Christchurch’s key highlights and local landmarks, which take on an entirely new life from the water. 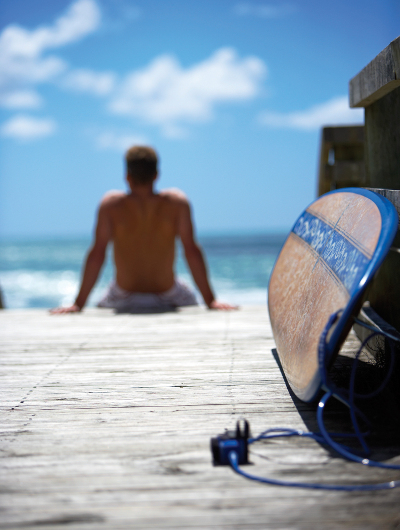 There’s always a great surf break somewhere along New Zealand’s vast coastline. For a feast of great waves, follow Surf Highway 45 around the Taranaki coast which curves through 180 degrees.

Further north, Raglan, Waikato has achieved legendary status thanks to its epic left-hand point break. Other North Island locations, such as Piha, Muriwai, Waipu, Gisborne and Mount Maunganui, are pumping when conditions are right. In the South Island check out Kaikoura and Dunedin. 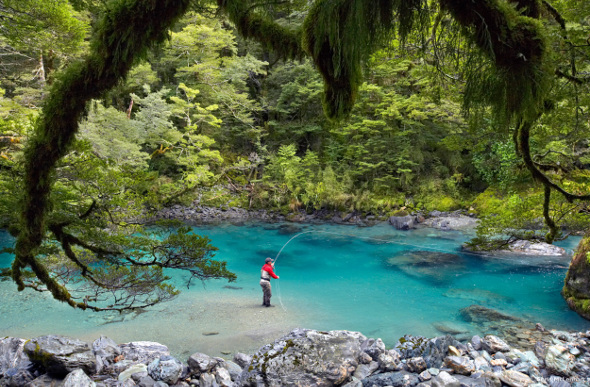 Fishing fanatics will be in heaven in New Zealand. December to June is big game fishing season. Head out from Russell or Tutukaka in Northland, or Tauranga in the Bay of Plenty and chase some seriously big fish, including marlin, yellowfin tuna and kingfish. 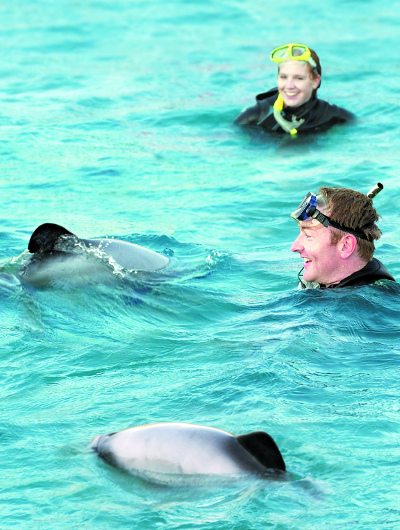 There is only one place on the planet where you can swim with the world’s smallest and rarest dolphin – the Hector’s or New Zealand Dolphin – and that is the beautiful sheltered setting of Akaroa Harbour in New Zealand’s South Island.

The dolphins are friendly and curious so they will usually come close to the boat. Once in the water the dolphins swim around and beneath you, as if to welcome their newfound friends.