The Newcastle Jets are back with a bang and, according to returning hometown hero Jason Hoffman, they’re looking to fly high once again as one of the Hyundai A-League’s premier clubs.

It’s safe to say the 2014-15 campaign was a forgettable one for the Jets, with the proud Hunter outfit finishing bottom of the standings amid a litany of off-field problems.

But a new coach, new ownership and a raft of new signings – including former Melbourne City defender Hoffman – looks set to return the Jets to their rightful place at the top end of the A-League table. 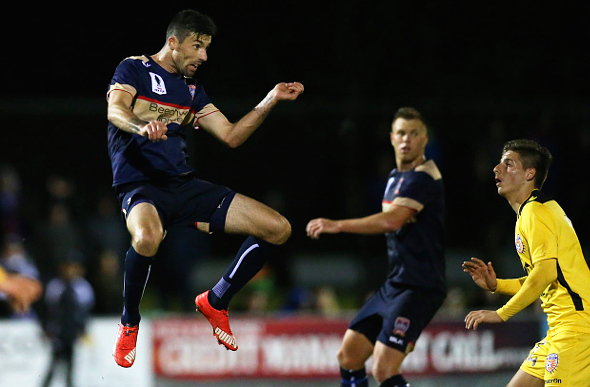 Hoffman in action for the Jets

“I guess the opportunity to come back now in what will be a rebuild of the club was very appealing,” says Hoffman of his decision to return to the club where he made his professional debut.

“The chance and the opportunity to come back and represent the Newcastle people… for me being a Novocastrian boy, was an opportunity that I couldn’t let pass,” he adds.

With new coach Scott Miller at the helm and returning stars like Mark Birighitti and Labinot Haliti adding some much-needed steel to the squad, the up-coming A-League campaign is all about restoring pride at one of Australia’s most passionately supported clubs.

“I feel like there needs to be a cultural change – which is definitely happening based purely on the new ideas and new philosophies of the new manager – and obviously there needs to be a lot of hard work with the new faces to make sure that we’re ready to go,” says Hoffman of the build-up to the new season.

Returning to the club where he won the 2007-08 championship in his first full season in professional football, Hoffman says he’s keen to help the club get back to winning ways.

“For me, that was my first year as a professional player and that was definitely the highlight of my club football career to date,” the former Australian youth international admits. “Just to see how passionate the Newcastle people were for the Jets – at home games and away games – was overwhelming.

“Obviously if we can help reconnect with a lot of the true passionate fans of Newcastle, then I’m sure it will go a long way to creating a successful team.” 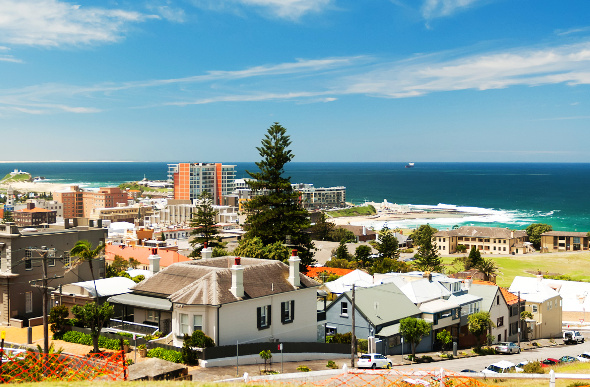 The Newcastle lifestyle is hard to resist!

Off the field, the newly married utility man says the city itself has plenty going for it.

“I think the city of Newcastle has a unique lifestyle,” Hoffman says.“It’s a fairly small community and you feel like you get to know a lot of different people.

“Obviously there’s the beach culture of Newcastle and, for a sportsman, the opportunity to play sport in a small town and have people that back you and to hang out at cafes around Hunter Street Mall and in summer go to the beach… I feel like the lifestyle sets Newcastle apart from most of the other main cities.”

Having enjoyed the cafe culture of Melbourne during a four-year spell with rival A-League club Melbourne City, Hoffman says Newcastle is fast catching up when it comes to boutique blends.

“It seems that there’s more and more cafes popping up in Newcastle and now that I’m sure I’m definitely back in the Newcastle scene, I’ll get to know more and more of them. I feel like the cafe culture is only getting bigger and bigger.”

Hoffman will hope he’s moving on to bigger and better things at the Jets as well and, with the Novocastrians having already signed up more than 5,000 members – no mean feat given last season’s struggles – all signs point to a Newcastle side ready to mix it with the best in the A-League.

With Flight Centre jumping on board as the Jets’ official travel partner for the 2015-16 campaign, there’s every reason to believe this could be one of Newcastle’s best seasons yet.

“If you’re looking to book your next trip away, go and see Flight Centre and I’m sure they’ll look after you like they do with all the Jets boys,” says Hoffman. 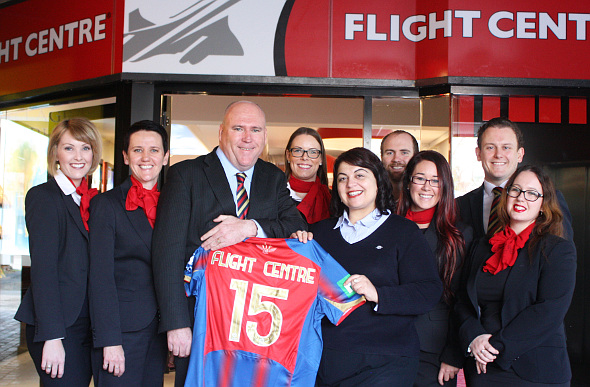 Jets representatives with the team from Flight Centre at The Junction

Visit your local Flight Centre store or call 131 600 for more advice and the latest deals on travelling to Newcastle.