Inspired by Disney Pixar’s Toy Story films, the new Toy Story Land will take guests into the world of Woody, Jessie, Buzz, Slinky Dog and other fun Toy Story characters, as they come to life in the larger-than-life outdoor setting of Andy’s backyard. 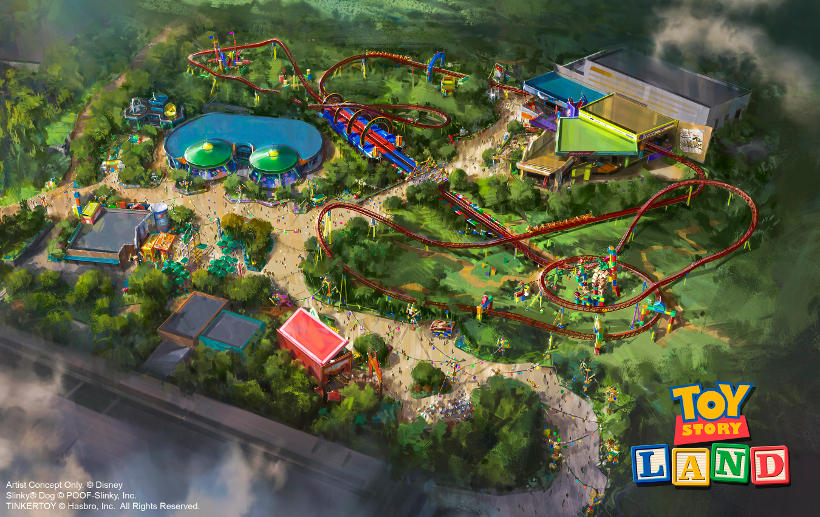 Spread across 11 acres, guests will be surrounded by giant building blocks and game board pieces. Highlight attractions are designed to suit all of the family. The Slinky Dog Dash for starters takes you right into the world of the toys, riding a roller coaster that feels like an obstacle course assembled by Andy for his toys.

Die hard fans will recognise the Alien Swirling Saucers as like the play set Andy won at the Pizza Planet restaurant – Toy Story green Aliens swirl about in their flying saucers with guests in tow in their rocket ship toys. It’s a space adventure bathed in intergalactic music, multi-colour lighting and sound effects from the galaxies the kids will love.

What’s more, the beloved Tory Story Mania! Attraction at Disney’s Hollywood Studios is getting an all-new colourful toy carnival game box entrance – the very box the Toy Story Mania! Game came in! Every last detail from the films will be brought to life here.

Bob Chapek, chairman of Walt Disney Parks and Resorts said, “With set pieces, staging, attractions and experiences, Toy Story Land represents the best of Walt Disney Imagineering’s collaboration with our storytelling partners at Pixar Animation Studios. This new land will invite everyone to experience the joy of being a toy.”

A Dose Of Nostalgia

It’s not all about the fancy new technology and rides though, Toy Story Land will also celebrate things that entertained for generations before: Crayons, Rubik’s Cubes, Green Army Men and many more toys and games that tug on the nostalgic heart strings.

And of course, when it’s time for refreshments, Woody’s Lunch Box, is onsite to serve up tasty meals including old-fashioned soda floats, and Mini Babybel – the official snack cheese of Walt Disney World Resort.

It's Just The Beginning

If that’s not enough to convince you to take the kids on a Florida-bound adventure, Toy Story Land is just the start of a multi-year reimagining of Disney’s Hollywood Studios, and the largest expansion in Walt Disney World’s history. Next year the 14-acre Star Wars: Galaxy’s Edge will premiere, along with Micky & Minnie’s Runaway Railway, the first ever Mickey-themed ride through attraction.