There are now 19 National Surfing Reserves in Australia, with Noosa on Queensland's Sunshine Coast the most recent to be awarded the official honour.

This comes just days after the Noosa Festival of Surfing celebrated its 24th anniversary with what they claim was 'the world's best surf party'.

For novices or grommets who haven't spent a lot of time hanging ten, the fact that there are 19 dedicated reserves around Australia will probably come as a surprise (and be handy for any Aussie-themed trivia nights!).

“We have always known Noosa beaches are of a high standard, but to be named as a National Surfing Reserve is a wonderful accolade for our region," says Damien Massingham, CEO of Tourism Noosa.

A National Surfing Reserve (NSR) is defined as an iconic place of national value in terms of environment, heritage, sport and culture. 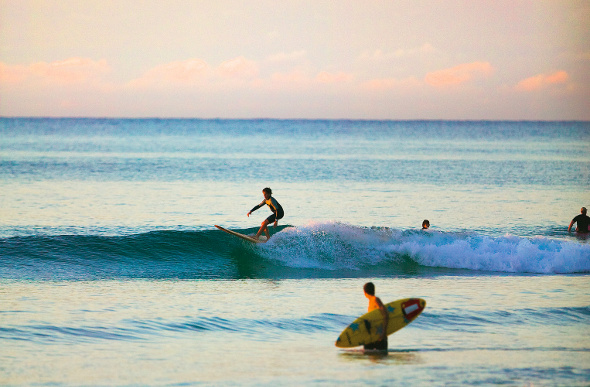 The purpose of an NSR is to be an all-inclusive space for everyone to enjoy, understand and protect, so we can all reap the benefits for many years to come.

A NSR is ranked on the quality of the waves, its sacredness to the local community, and the long term use of the beach and surf.

“It is fantastic that Noosa has now been put forward into this category”, says Phil Jarratt, chairman of the Noosa National Surfing Reserve committee. "We had a tremendous amount of encouragement from the Noosa community."

Noosa locals banded together to nominate their sparkling region for NSR status, including big support from the Noosa Heads Life Saving Club, Noosa Shire Council and the Queensland Parks and Wildlife Service among many others.

With the new title and the fact that 2016 marks the 25th anniversary of the Noosa Festival of Surfing, next year's festivities will no doubt be the biggest and best yet!

"Noosa has warm water all year round and is the best and safest surfing learning venue in Queensland. One can say it's arguably one of the longest rideable waves in Australia, which is pretty amazing!

We have five point breaks with world-class waves, all located in the most visited national park in Australia, which has also been voted the number one walk in Australia where the rainforest meets the coast."