Edinburgh can be murder. It can be, at least, if you arrive at the castle among a convoy of tour groups. Or if you’re Inspector Rebus. For John Rebus, the misanthropic hero of Ian Rankin’s detective novels, this isn’t the city of festival, shortbread and tartan; it’s “a crime scene waiting to happen”.

Since 1987, and through 19 novels, Rebus has been pursuing serial killers and gangsters, drug-traffickers and people-traffickers through the tight alleys of the Old Town and the broad streets of the New Town, exposing corruption and generally laying bare the underbelly of “the Athens of the North”. 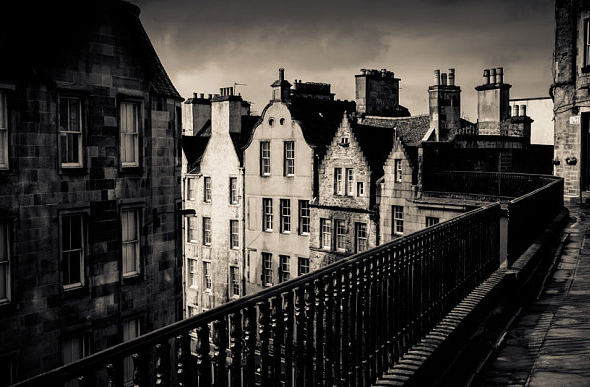 "Just walking down the Royal Mile, from the castle to Holyrood, you pass I don’t know how many closes, wynds and alleyways. Probably more than a hundred. And each one you go down is different, and each one gives you a different perspective on the city" Photo: AP/FOTOLIA

He recently made his 20th outing, when Rankin published Even Dogs in the Wild, bringing Rebus out of heel-kicking retirement to act as a “consultant detective”.

The body of a senior lawyer has been found along with a threatening note. On the other side of the city, the gangster Big Ger Cafferty – Rebus’s old adversary – has received an identical note and a bullet through his window. When Rebus’s former colleague DI Siobhan Clarke asks for his help, he doesn’t hesitate.

Struggles, Killings And Some Fiction

So begin both the latest case for Rebus and a book that Rankin can confidently expect to be another bestseller.

It won’t do any harm to the tourist trade, either. In the early days, reviewers were apt to say something like, “Gripping – but unlikely to be recommended by the tourist board”.

The second part of that assertion is no longer necessarily true. Since 2000, Rebus Tours – set up independently but with the blessing of the author – has been leading groups of visitors through the city on Saturdays past real police stations and pubs and the locations of fictional struggles and killings, weaving in enough local history and yarns to keep even those who are new to Rebus entertained. 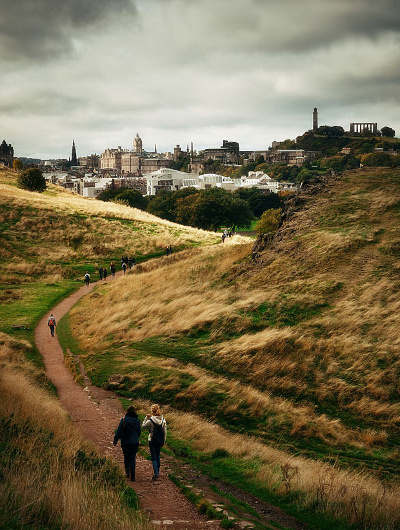 There is also an app, devised by Rankin’s publisher, with which you can follow your own tour of “Ian Rankin’s Edinburgh ”. Both, while aimed primarily at Rebus readers, will be eye-opening for non-initiates – and for people who, like Rankin himself, are outsiders.

Born in Cardenden in Fife, he moved to the capital in 1978 at the age of 18 to study English literature. “Edinburgh,” he told me when we met in the New Town, “was a strange kind of place to me; I started writing poems and stories to make sense of it. And I suppose that’s ongoing: Rebus, like me, is an outsider [a Fifer of Polish descent]; he’s still not quite sure what Edinburgh is. And so each book is an attempt, I suppose, to look at a different part of Edinburgh’s psychology – but also using Edinburgh as a microcosm for Scotland as a whole.” 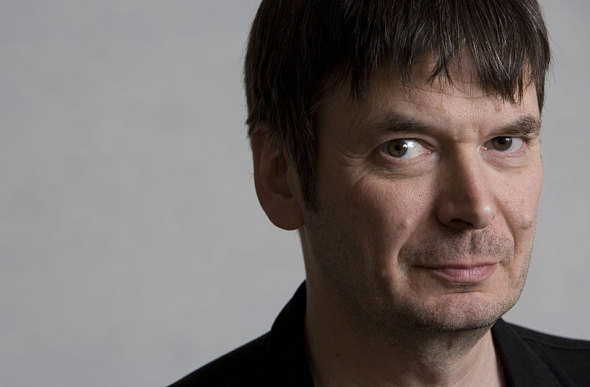 You Could Just About Be In The Highlands

Rankin is 55, a decade or so younger than his creation, and maybe a bit less chiselled in the flesh than in his stylised, noir-ish publicity photos. Cheerier, too. Having strolled and posed on Rebus’s turf for pictures, he told the Telegraph photographer: “Photoshop them. Take a few pounds off and one of the chins.”

His adoptive city, he told me, is a manageable one; a concise one. “It’s ringed by hills and water, so it can’t really grow any bigger than it is. That means I can contain it in my head. And I think it’s containable for people who come here looking for Rebus’s Edinburgh.”

“Wander around some of the lower slopes of Holyrood Park. You could be in the Highlands, but you’re still in the middle of a city. It’s an extraordinary thing, and there’s nowhere else in the world that’s quite like that." 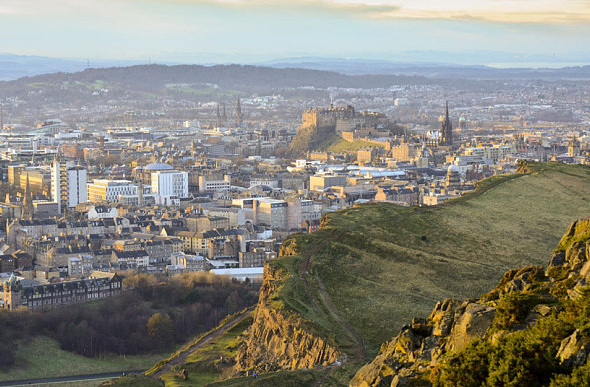 In the new book, he has Rebus observe that this is “a city that liked to keep its counsel and its secrets”.

There is much, he reckons, that the casual visitor misses: “Just walking down the Royal Mile, from the castle to Holyrood, you pass I don’t know how many closes, wynds and alleyways. Probably more than a hundred. And each one you go down is different, and each one gives you a different perspective on the city, so just exploring even these little narrow walkways is an education in itself.

“If you go into Holyrood Park, and don’t just follow everybody up to the top of Arthur’s Seat but actually wander around some of the lower slopes, you won’t see anybody and you won’t see any signs of habitation. You could be in the Highlands, but you’re still in the middle of a city. It’s an extraordinary thing, and there’s nowhere else in the world that’s quite like that.

“Then you’ve got all the buried streets, tunnels, catacombs, places like Mary King’s Close that used to be closed off but which have been opened up to the public…”

The dual nature of the city has long been a feature of his work. It’s there physically, he says, in the dichotomy between the higgledy-piggledy Old Town and the considered and rational New Town.

“It’s demonstrable psychologically, too, in people like Deacon Brodie [a carpenter by day and a burglar by night], whose story was a big influence on Robert Louis Stevenson’s Jekyll and Hyde. If you go to the Writers’ Museum, you can see the wardrobe that was in Stevenson’s childhood bedroom that had been made by Brodie – who was eventually hanged on a scaffold that he himself had helped to build.”

Brodie has a pub named after him. Rebus hasn’t – yet – but his favourite is known to be the Oxford Bar in the New Town, which is sought out by tourists. It’s a two-room pub, cosy but offering neither food nor frills.

On the wall above the bar are pictures taken at the front door of Rankin and of Ken Stott, who played Rebus on television. Rankin, who hadn’t been in for a while, was alert for changes. “Cushions on the seats, laddie!” he said to Harry Cullen, the craggy owner. 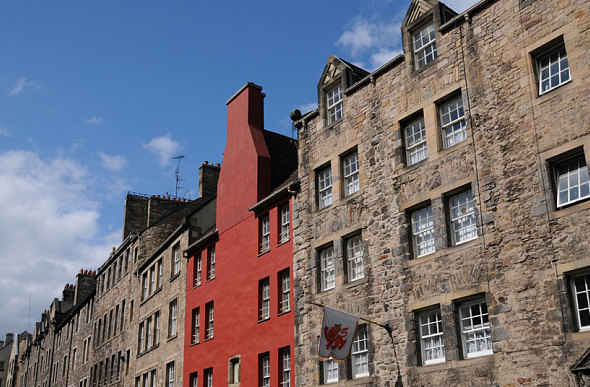 It was in another pub, the black-fronted Royal Oak on Infirmary Street, just off the Royal Mile, that I was due to meet Colin Brown of Rebus Tours. Folk music is a big draw there in the evenings; Rankin has enjoyed it, and penned the sleeve notes for a CD of the pub’s sessions. He has also sent Rebus to the pub, who had a less pleasant night when he encountered among the singers his old enemy Cafferty.

Brown, 63, a native of the city, took over the tours in 2006. He trained as an actor in Glasgow, and is clearly more comfortable with an audience – though I got a sense of how he hams it up a bit for the tourists.

Our first stop was outside the mortuary to which Rebus is regularly called. Bodies are brought there from up to 60 miles away, said Brown, but only those found in suspicious circumstances – “a screwdriver sticking out of the ear, something like that”.

Over a couple of hours we took in both a police station where the CID (real and fictional) are based and housing estates where the search for offenders is likely to send them. I heard stories of true crime – including one of a murderer turned minister – and a series of “Rebusian readings”.

There were glimpses of the Flodden Wall, built in 1513 to defend Edinburgh from English attacks, and of Salisbury Crags, the cliffs on the west of Holyrood Park. I was introduced to the word “clype” (meaning to inform on) and I was reminded that I was walking not on cobbles but on setts, which might look like bricks but went down a good 25 centimetres under foot.

I also spent a couple of days wandering the city using the Rankin app (which he helped his publishers produce but has never tried out himself). There are tours on it of the Old Town, the Royal Mile, the New Town and the Water of Leith: a river the local conservation trust rightly bills as “a silver thread in a ribbon of green” flowing through Edinburgh.

It started at the entrance to the Scottish National Gallery of Modern Art, where one of Antony Gormley’s life-size bronze men is buried up to his chest in the Tarmac – Tarmac so wet and reflective on a rainy day that it seems to be more of a black, leaf-strewn lake.

From the back of the gallery, beyond one of Henry Moore’s reclining figures, I followed steps down to the Water of Leith and one of the loveliest walks I have ever taken in a city. 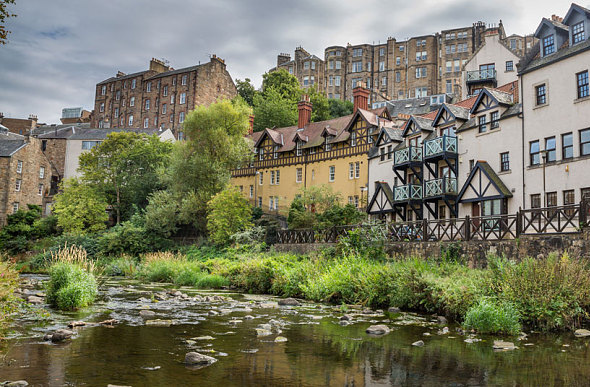 The Water of Leith Photo: AP/FOTOLIA

The path hugged the river, winding past a stone wall sleeved in lichen and through tunnels of mature trees. From Dean Village, I climbed the hill to Dean Cemetery, last resting place of Enlightenment heroes.

Then, ducking beneath the red fuchsia bells of Ann Street (“the most attractive street in Britain”, according to John Betjeman), I headed on into Stockbridge – which has featured in television adaptations of Rebus – and the Colonies, fine stone terraces built by and for the working classes towards the end of the 19th century. I went down to them on a flight of steps, emerging at a spot where, possibly, one of Rebus’s adversaries might repent after a life of crime: Dunrobin Place.

Visit your local Flight Centre store or call 131 600 for more advice and the latest deals on travelling to Edinburgh.

This article was written by Michael Kerr from The Daily Telegraph and was legally licensed through the NewsCred publisher network.