Did you know that Oktoberfest actually starts in September, and it's already well underway in Munich? Lasting 16 to 18 days, this famous German folk festival originated around 1811. Today, the festival draws more than 6 million revellers of all ages from around the world to gather together, drink beer, eat food and generally have a great time. Even if you didn't make it to Munich, in the spirit of the season, here's how to celebrate Oktoberfest like a local. 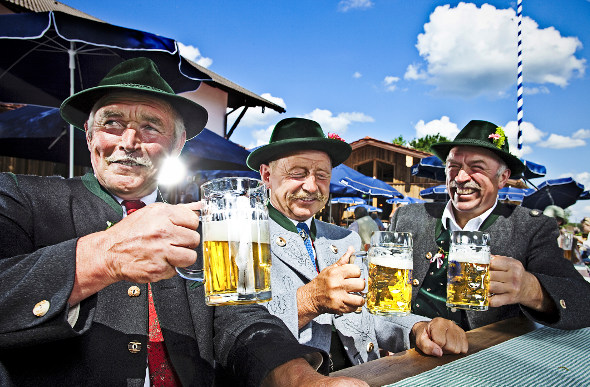 Better know the basics if you want to fit in with the locals (Image:Getty)

Only tourists call the festival Oktoberfest. If you want to do as the locals do, always refer to it as the Wiesn.

Traditional dress is a big part of the festival. Many if not all locals wear their traditional Bavarian costumes when attending the festival, which visitors are more than welcome to try. Just remember to be respectful and avoid non-traditional elements such as shiny fabrics, neon colours, rhinestones or lederhosen and dirndls that hit above the knee.

Gals typically wear a 'dirndl' – bodice, blouse, full skirt and apron. Just be mindful of how you tie the knot on your apron. To the left means you're single. To the right means you're taken.  Gents wear a checked shirt, leather lederhosen, trachten socks and shoes.

Tourists should never try to sneak out of the tents with their mugs. While it can be tempting to take one as a souvenir, this is highly frowned upon. There are plenty of souvenir shops around the grounds where you can purchase similar mugs.

If you have a reservation or you're lucky enough to snag a seat, keep in mind the tables are shared. You should always check with those around you to make sure any open seats aren't taken, and be welcoming to others looking to sit at the table with you.

It's a good idea to carry cash with you at the festival. Not all of the tents will accept credit cards, and those that do, may have a minimum spend limit. It's best to be prepared so you're not caught off guard. 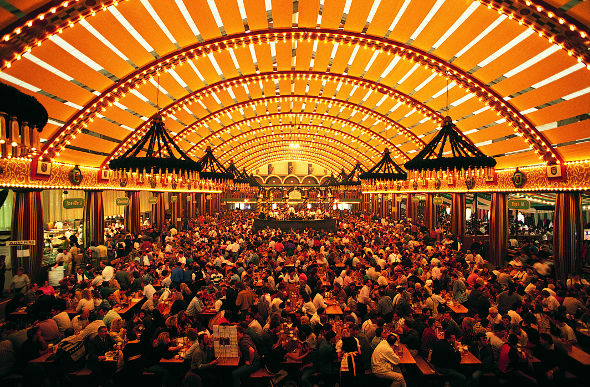 Each tent has a different theme (Image: Getty)

While it can be tempting to get straight to the beer tents, it's well worth checking out the opening day parade. This tradition dates back to 1887 and sees an hour-long processional of horse-drawn beer wagons ushering in the first kegs of the festival. This is followed by the mayor of Munich tapping the first ceremonial keg.

Beer may play a large part in the festivities, but that's not to say drinking is the only thing to do. There are fair grounds all around, offering up plenty of activities appropriate for all ages. This includes a giant Ferris wheel, merry-go-rounds and amusement rides as well as costume parades, games and more.

The beer tents are the main attraction, which means they're busy! If you want to ensure a spot at a table, you better arrive early. Alternatively you can make reservations. Each year sees approximately 14 large tents and 20 small tents. While the large tents are considered the stars of the festival, the smaller tents are also worth checking out for their unique designs and great atmosphere. Just keep in mind that each tent (large and small) offers a different theme. Ranging from celebrity hangouts to 'Bavarian Heaven', it's worth doing a little research to find the ones you really want to see. 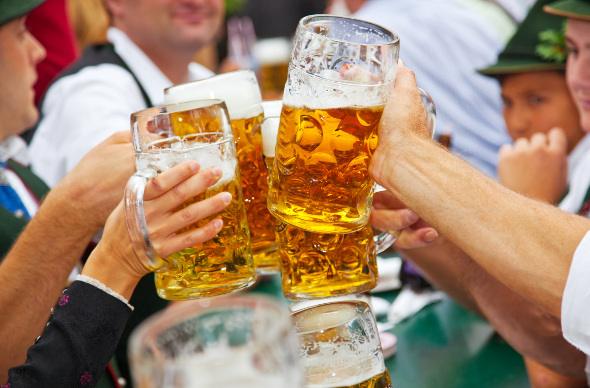 Speaking of the beer tents, there are a few things to consider before you jump right into the festivities.

First and foremost, they're not actually called steins but rather maβ (pronounced 'mass'). Each tent generally offers a single brand of beer served in a maβ, which contains a litre of beer.  There are no other sizes, and prices are per maβ. They should be held with one hand, which is slid through the handle.

It's polite to clink your mug with those seated around you and say 'Prost!' while making eye contact with each person. Just remember to clink with the bottom of the mug rather than the rim to avoid spills and chips in the mug. 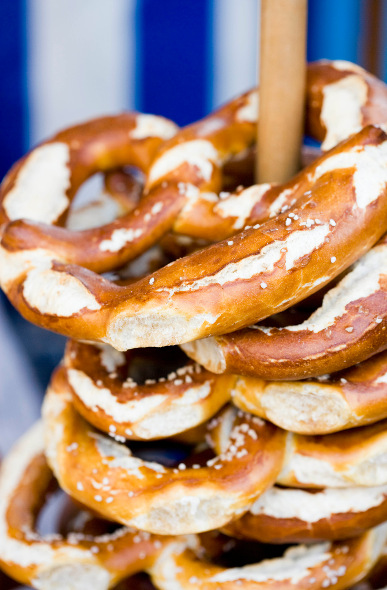 Don't forget to sample the food as well (Image: Getty)

It wouldn't be a festival without a little fare, and Oktoberfest certainly knows how to dish up traditional favourites. You'll find bread, meat and sweet treats galore, but here are a few plates you should definitely test.

Like peanut butter and jelly, beer and bretzels are a classic combo. You just can't have one without the other. Best described as a mega soft pretzel, these snacks can come in sizes bigger than your head!

If you're a meat lover, you can't go past these two traditional dishes. Better known as sausages and pork knuckles you'll find plenty of purveyors dishing it up. The former comes in the form of favourites such as bratwurst and currywurst, while the latter is served up on a heaping pile of sauerkraut and mashed potatoes.

Rotisserie chicken is a popular choice in many of the festival tents. It's served in half- and whole-chicken portions and often comes with a side of potato salad or Knodel dumplings.

If you have more a sweet tooth, you won't be left out of the celebrations. There are plenty of deserts to taste-test between drinks. Crepes are a popular choice, doused in applesauce. You'll also find waffles smothered in whipped cream, sugar and chocolate sauce. Perhaps the most popular sweet treats, though are the candied almonds and gingerbread.