I'm putting it out there: Okefenokee Swamp is the best place you've never heard about. However, if you don't like alligators, swamps or any part of nature, you probably won't want to hear anymore.

Okefenokee is a living diorama of Low Country wildlife. The 177,252-hectare wetland straddles the border of Georgia and Florida in the USA. Technically you can enter the swamp wherever access is granted, but most travellers should head to the official Okefenokee Swamp Park.

I'll give you a few reasons why. 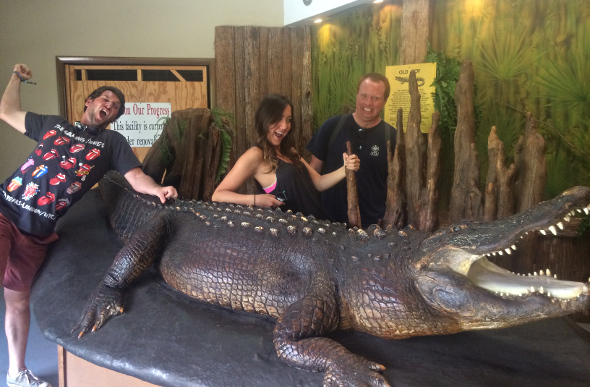 Hanging out with Old Roy, Okefenokee's most famous gator (All images: Ben Stower)

Meet The Swamp's Other Residents

Okefenokee Swamp supports an array of native wildlife, but I didn't realise the extent of its diversity until I explored the park. Along with alligators, Okefenokee is home to otters, herons, woodpeckers, various lizards and even black bears.

Upon first entering, the park appeared quite basic, with one enclosure for some lazy alligators and another for two inquisitive otters. Further exploration along the boardwalks and footpaths uncovered an indoor section showing off some of the swamp's reptile and amphibian inhabitants. Unfortunately, all of the black bears were hiding.

At this point I felt I was experiencing a typical zoo outing, which wasn't what I'd expected or hoped. Then came the 'Eye on Nature' show. This 25-minute program changed up proceedings quickly with education on local snakes and other animals, along with an opportunity to hold a snake and turtle. 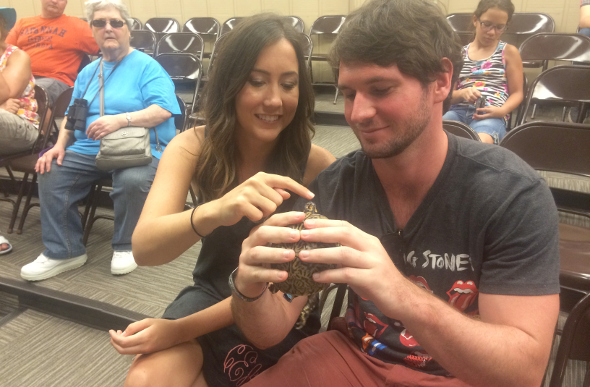 I was chomping on deep-fried gator tail when the Lady Suwanne's horn blew signalling the train was ready to depart. Okefenokee Swamp Park has a few of these planned activities, but they're all intelligently scheduled to offer enough time for self-exploration in between.

I would've been at the train already had I not been distracted by the offer of actual gator tail at the Snack Shack. I legged it across the park – tail in one hand, drink in the other – but in the end I had no reason to rush. Unlike trains in the city, the Lady Suwanne was giving us a five-minute warning.

I sat down in the replica steam engine train and enjoyed the rest of my tail as it chugged slowly along the 2.4-kilometre track circumventing the park. There was a chance I'd see some wild animals, but the main highlights were replica Native American abodes, an old moonshine distillery and the stop at Pioneer Island.

Pioneer Island displayed an authentic representation of pioneer life. Ignoring the creepy mannequins, I learned a lot about the early settlers to the region. 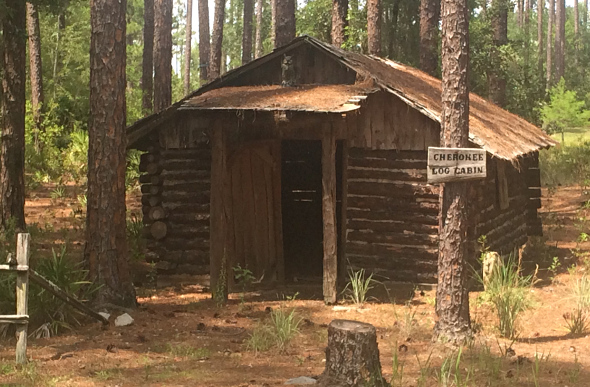 Get outdoors State-side. 13 Rewards For The Outdoorsy

It was also on Pioneer Island where I first spotted a fully-grown male alligator. I was standing on a grassy bank, peering into the murky water hoping to find one when I saw air bubbles rising. Excited, I looked back to see where everyone else was, but I was alone.

I turned back to the water. The bubbles had disappeared, replaced by the head of an alligator about three metres away.

I didn't know it at the time, but this was Crazy, the Okefenokee Swamp Park's resident alpha-male characterised by a missing eye. He was given his name after killing fifteen alligators when he first arrived – an assertion of dominance I was told.

Crazy seemed to be staring right back at me with his one eye and empty socket. Slowly he drifted closer to shore until I could see all 13 feet (≈3.9 metres) of his intimidating form.

I noticed he was heading to a particular part of the bank where there was barely any grass. Realising this was Crazy's path for coming ashore, I quickly made my way back inside the pioneer cabin. 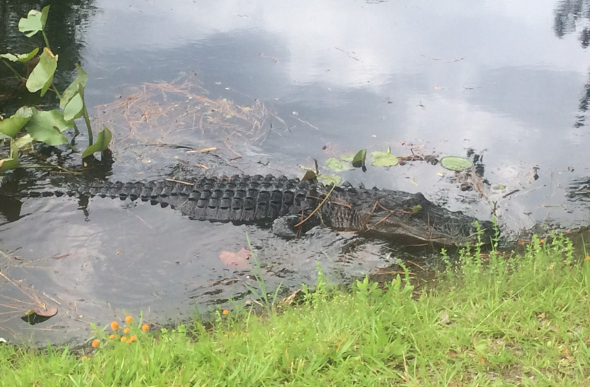 My first encounter with a gator at Okefenokee

Pay a little extra for the boat excursion. You get to cruise along original Native American waterways where snakes, spiders and alligators roam. Our guide was very good at pointing out gators hiding amongst the lily pads and spiders in the trees above our heads.

At one point we passed an alligator nest on our right and the mother on our left. Mother gators are some of the most aggressive and the guides have had some over-protective types ram the boat. This one gave us a snort and quickly swam over to check on her little ones after we'd passed.

There were more experiences like that, times when I witnessed alligators behaving unbridled in their natural habitat, which gave Okefenokee a refreshing voyeuristic quality. I'd finally left the zoo and entered the wild. 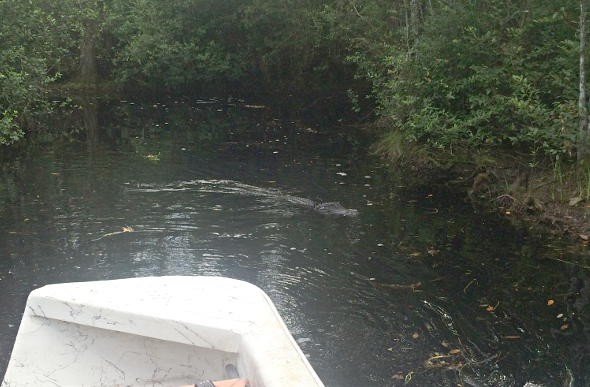 A mother alligator checks on her babies after letting us pass

And Then There Were Flies

Ironically, we weren't bothered by the alligators, snakes or spiders. The only things biting were the yellow flies. These little pests are a mutated amalgamation of flies, mosquitoes and horse flies. Coloured yellow, they're easy to spot, hard to kill, seemingly immune to insect repellent and leave a serious lump on some people.

My advice: Visit the swamp in August and September when the flies aren't around, and definitely not when I did during May and June when the fly population peaks. If you do encounter yellow flies, make sure you use insect repellent with DEET (diethyl metatoluamide).