All Aboard Pakistan's Sightseeing Double-Decker

All Aboard Pakistan's Sightseeing Double-Decker

Creeping through Lahore’s notoriously bad traffic on Pakistan’s first-ever sightseeing bus, the air was as thick with pride as it was with pollution.

“They say a year isn’t enough to explore Lahore,” ran the commentary – in English for my benefit, but usually in Urdu (multilingual headphones aren’t available yet). 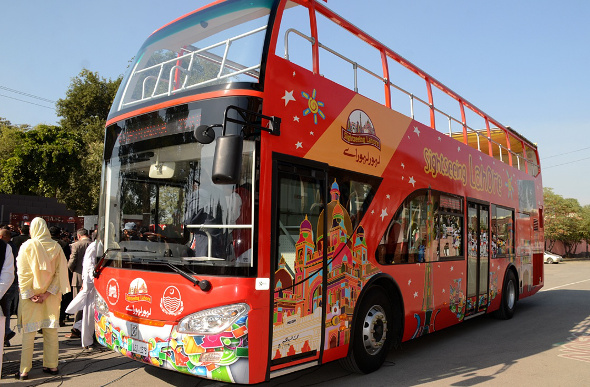 As we passed the city’s 2,000-year-old monuments, seldom visited by international tourists, the snap-happy domestic travellers on board beamed.

“Slow down so we can take selfies,” the tour guide instructed the driver to everyone’s delight. According to Sightseeing Lahore’s operations manager, Nayyar Mahmood, the response to the service, in bookings and feedback, has been “overwhelming”.

“Oh, great…” the commissioner of Lahore, Abdullah Khan Sumbal, said, smiling wryly, when I passed on the news. “We’re surprised something good is happening in Pakistan.”

The bus tour itself is conducted in red, open-top double-deckers, imported from China, and aims to reflect “international standards” by emulating similar schemes abroad. 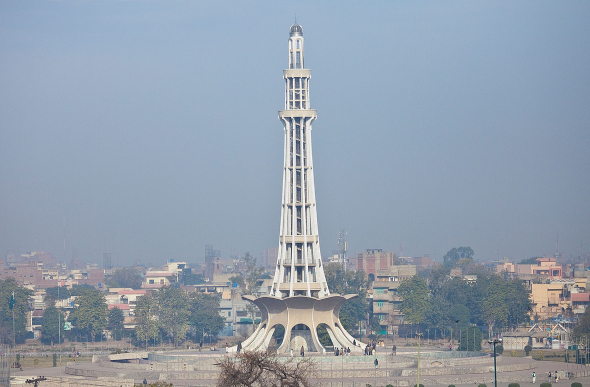 The Minar-e-Pakistan can be seen on the tour (Image: Alamy)

Seek out the hidden clubs. Behind Closed Doors: Nightlife In Karachi

The tour takes almost two hours, with traffic, and covers more than 30 landmarks; beginning at the Punjab Stadium in the south-east of the city and ending in the north-west, at the Minar-e-Pakistan, a peculiar lighthouse-cum-Eiffel Tower structure.

Drivers and passengers on the packed streets were enthused by the spectacle of the bus itself, waving and taking photos of the city’s latest attraction.

Lahore, spanning almost 1,813 square kilometres and with a population of over 11 million, is not short of monumental attractions and this tour aims to showcase them: the Badshahi Mosque is the world’s fifth largest; the Unesco-listed Lahore Fort is an exemplary piece of Mughal architecture; the Minar-e-Pakistan was built to commemorate the establishment of Pakistan in 1947.

And below the lofty crowd-pleasers are the intricate streets of the Walled City, “the real Lahore”. Stuffed with food stalls, crafts and colour, it’s a would-be backpackers’ paradise. But there are no backpackers here. 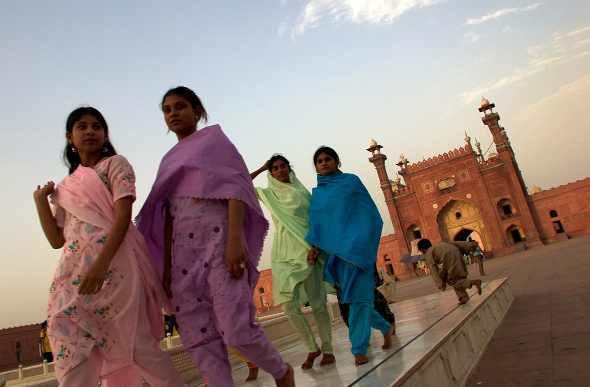 “We have fond memories of the Lahore of the late 1970s,” Sumbal says. “Foreigners used to walk around quite comfortably. We always thought the city had great potential for tourism.”

For me the tour highlights weren’t the historic sites but the bird’s eye view of the little things, so easy to miss in the hubbub: the roadside barbershops, the brightly coloured rickshaw dealerships, the goats lounging on piles of rubble.

Symbols, perhaps, of a Lahore that the government would prefer to modernise – or at least sanitise. My friend (a Pakistani now living in the UK) turned to me with tears in her eyes.

“I moved to the UK for the order and efficiency, but this is what I miss – this chaos.” Driving back to the terminal, patriotic Urdu songs rang out.

“What are the lyrics?” I asked her.

Visit your local Flight Centre store or call 131 600 for more advice and the latest deals on travelling to Pakistan.

This article was written by Sophie Hemery from The Guardian and was legally licensed through the NewsCred publisher network.