Party Of Five: Road-Tripping The South Island On 4 Wheels With 3 Kids

Party Of Five: Road-Tripping The South Island On 4 Wheels With 3 Kids

Burleigh Heads based photographer Sean Scott embarked on this third trip to New Zealand in September this year. On the crisp trail of spring, he and his family of five journeyed around the South Island  for 16 glorious days. With a little more baggage than flying solo, the professional photographer and gallery owner shares with us some firsthand tips on driving holidays with a family in tow. 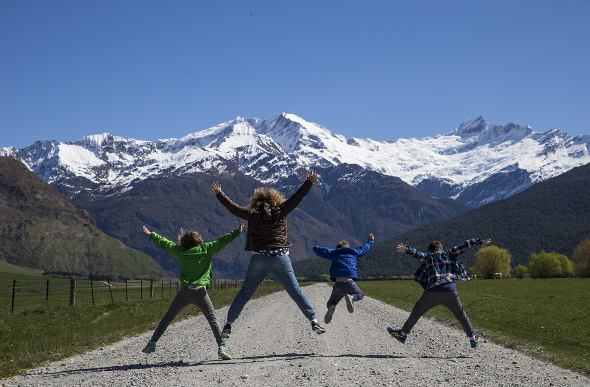 The Scott’s took in horse riding, jet boating, billy carting, endless walking tracks and even a kept an eye out for hobbits on a Lord of The Rings Tour. Having toured the countryside in a motor home in the past, this time round Sean decided to go the 4WD option, staying in motels along the way. He says each of these modes of transport have their own merits.

“Motor homes give you the freedom to stay longer in a spot if you like, without having to press on to the next chosen port of call for the night. However 4WD affords you the ability to get a little off the beaten track and travel a little faster around the endless winds and bends of this magnificent island.” 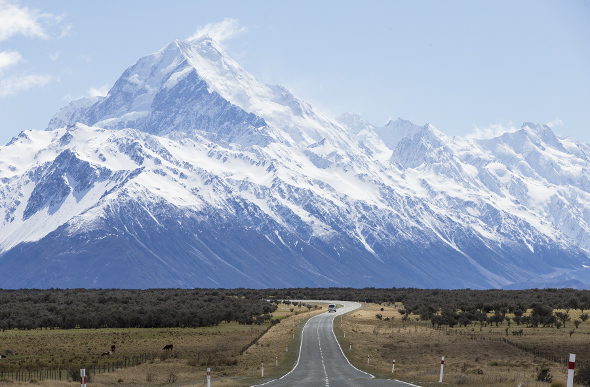 Head out on the highway...

As for how to keep three kids aged 10 and under happy on the road? NZ’s South Island does a pretty good job of kerbing the ‘are we there yet’ cries with its breathtaking scenery and wildlife. An iPad doesn’t go astray for longer trips either, and don’t forget the age-old value of ‘eye-spy’.

Read our interview with Sean to uncover what family fun awaits on the South Island...

How do you keep three kids aged 10 and under entertained on the road?

I love driving and the kids have been pretty great at adapting to longer drives. We play games in the car, we’ve also got iPads to give them something to switch across to, but we make sure to have times where they are switched off and they can take in the scenery. 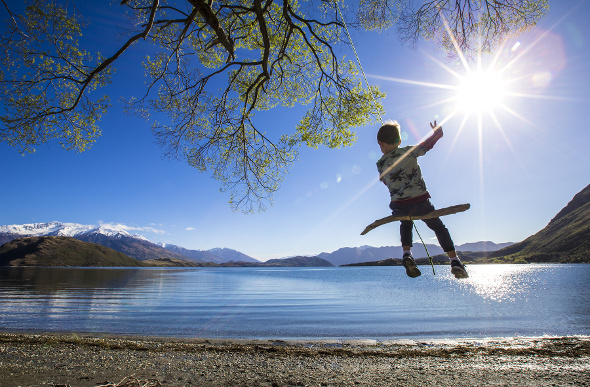 Stand out moments from your travels in the South Island?

One definite stand out moment was when we found the seals out near Kaikoura. We pulled over and the kids ran over, perhaps a little scared because the seals have a tendency to jump up. My son wanted to get a ‘selfie’ with a seal in it – he got a few shots – one in particular had a seal launching at him in the background! We also went for a walk on the beach, and my other son, who is six, hadn’t yet spotted the seal that I’d seen, so we kept walking and he didn’t realise until we were about a metre away from it, and it startled him as it jumped up at him. Frightened the life out him, all in good fun of course!

I imagine the seal would have been twice the size of him?

Yes, they are quite big. 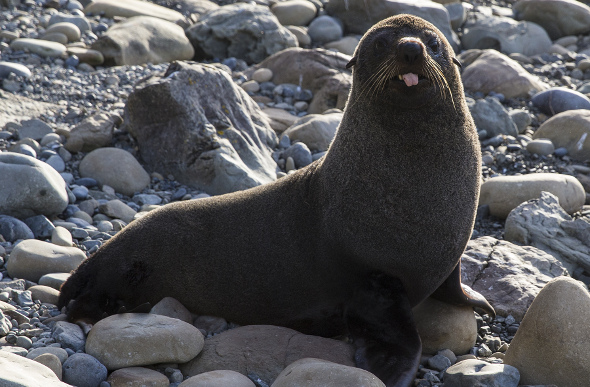 Meeting the locals in Kaikoura

How did you navigate whilst on your trip? GPS or old fashioned maps?

The internet is really quite cheap there, so I always get a sim card at the airport. I’ll buy a Nokia phone with a local sim card for about $30 or $40 to make phone calls. And then I’ll buy a sim card for my iPad for internet. In the morning I’ll Google the trip for the day, and look up local accommodation options for the destination, sometimes I’ll book ahead, other times I’ll just call when I arrive.  I also look at the weather. There’s a New Zealand weather App I use. It comes in handy for planning ahead. Some friends had done a similar trip to us, but the rain followed them the whole time. We were lucky; we had pretty much no rain. It pays to check ahead and watch the weather patterns, particularly as some of the mountain regions have dramatically different weather. I was able to chase clear skies for 16 days on the South Island.

Another tip: if you are planning to motor home or campervan your trip, download the Campermate App to located the free camping sites to park in overnight. There are around 340 free (or low cost) camping sites know as ‘Freedom Camping’, and plenty of these can be found in beautiful locations on the South Island.

Yes, and we only really saw half of what we wanted to. There’s just so much to see. 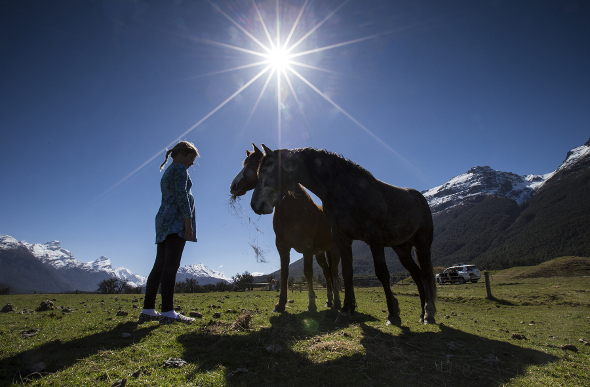 Sean's daughter having a moment with her new equine friends

Are there lots of pit-stops, look outs and places in general to stop and pull over all the way?

Everywhere you are is just amazing. You don’t even need to be looking out for places. Just drive from here to there and you’ll see loads of incredible opportunities to stop.

Did you have to plan ahead and pack food supplies or were there plenty of roadhouses to stop in at along the way?

We didn’t really pack any food. It’s a good idea to have water supplies of course, but we found it pretty easy to stop and get food when we needed to. But in saying that, there are a couple of places I really loved and it would have paid to take a picnic lunch to stay longer and enjoy the spot. 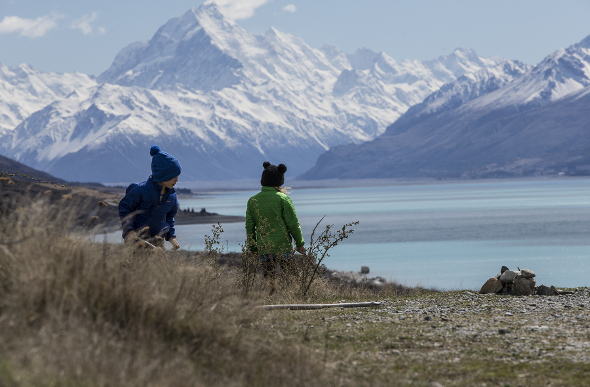 Kidding around the lake's edge

Where are some places you can recommend to stop for a picnic lunch on the South Island?

There were a few highlights for me. On the drive out from Queenstown, then past Glenorchy, there is a town call Paradise. If you keep following the road, right to the end, you end up in this huge valley with a braided river. It’s hard to explain, but there’s a huge mountain either side of the valley which is about 200 metres wide. You can just walk out into it and not glimpse another person as far as the eye can see. There are also some great walking tracks here; it’s so beautiful and so easy to get to, it felt like we were in The Hobbit or something. That’s one spot I’d like to go back to for a picnic lunch, and spend a whole day exploring.

Also in Wanaka, out towards Mount Aspiring, there’s a valley and you can walk out onto a glacier. That was an incredible day; I got into the glacier water for some photos, it was a crystal clear stream. I’d love to spend two or three days exploring this region alone. The weather really turned it on when we were there. We followed the glacier round and at the end there’s a nice easy walking track. 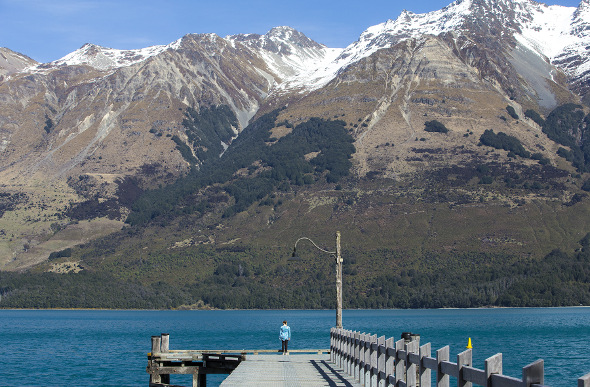 Admiring the great lakes of The South

What activities did you and the family get up to that you really enjoyed?

We jet boated in Queenstown which was pretty cool. Being the ‘Adventure Capital of the World’, there’s plenty of do there, although it can get a bit expensive. We took the gondola up the mountain in Queenstown, and then rode the Skyline Luge which was fun for the whole family and a pretty cheap activity too. We went horse riding out at Glenorchy and we did a Hobbit Tour which was a bit of fun as well. 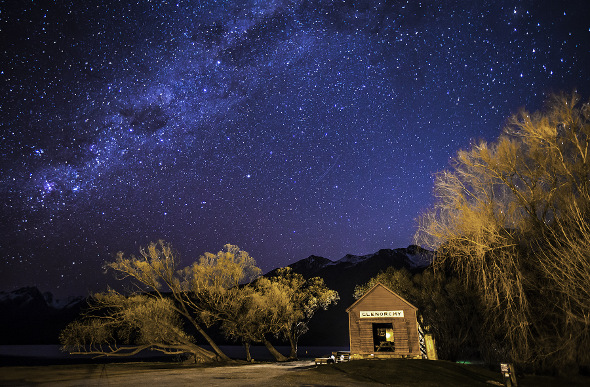 The stars shine brighter in NZ