Like most well-travelled Aussies, I’ve seen my fair share of Southeast Asia, but my girlfriend and I couldn’t resist some great flight deals to Kuala Lumpur (KL) that gave us 10 days to explore the fascinating western peninsular of Malaysia.

Starting in KL, we made our way around the country with a surprisingly comfortable mix of cheap coaches and affordable accommodation.

This left us plenty of cash in the wallet for a whirlwind tour of sightseeing, street-food dishes and a few too many island cocktails! 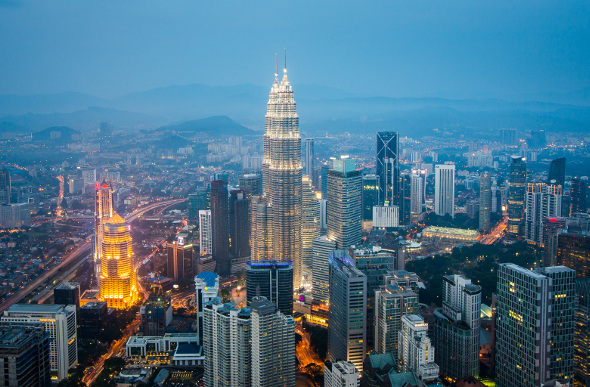 The journey started in KL, and we headed straight to the top of Menara Tower for a bird’s-eye view of the city lighting up over twilight.

With an outdoor observation deck and generous opening hours, Menara was the perfect vantage point to take in the true size of this huge Asian city. 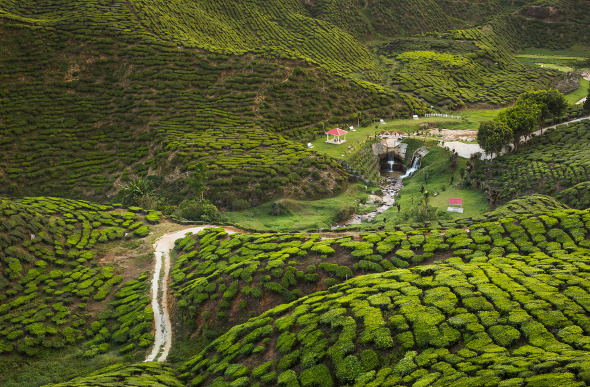 A comfortable three-hour coach trip from KL took us straight into the Cameron Highlands, famous for its scenic tea farms that spread throughout the cool mountain landscape.

Our driver made an early stop at Cameron Bharat Tea Estate so we could take in the best views of the region before sunset. 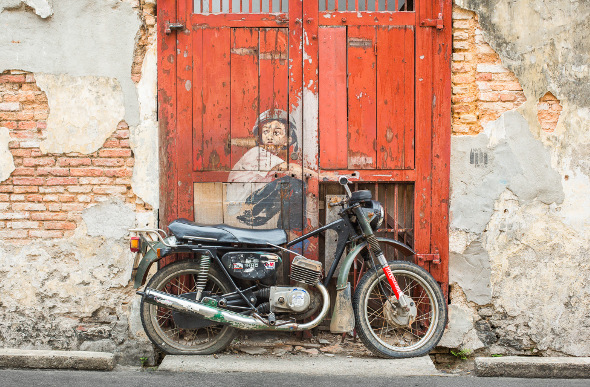 Next up on the itinerary was Penang Island. Its largest city, George Town, is renowned for lively street art that integrates real objects.

We found a map of all the best spots at a tourist centre and set off exploring and photographing each unqiue scene. Boy on a Bike (above) was my favourite, which we found on the wall along Ah Quee Street in the colourful city centre. 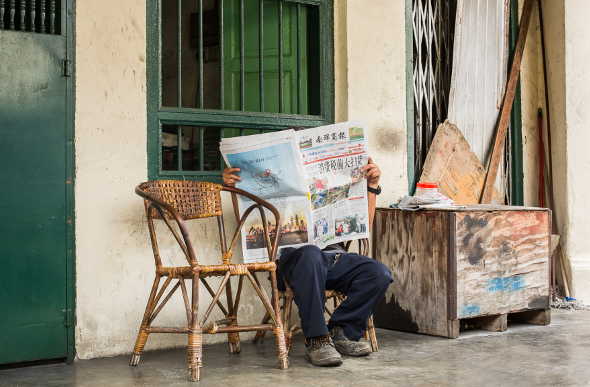 Just as fascinating as the art in George Town are the locals, who could be seen working and relaxing outside in the humid tropical heat. I photographed this man catching up on the morning’s news outside a workshop in the city centre.

Ever been to Africa? Open Shutter: Capturing Africa's Many Faces 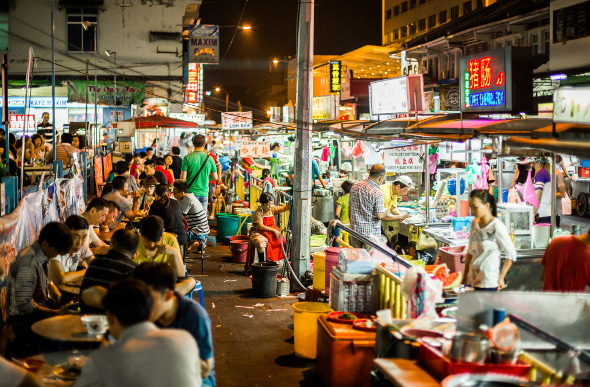 George Town's well-known hawker markets lit up every night for tourists and locals alike on New Lane. The food stalls offered a range of Malaysian and Thai classics such as char kway teow, mie goreng, laksa and nasi lemak. We couldn’t choose, so of course we tried them all. 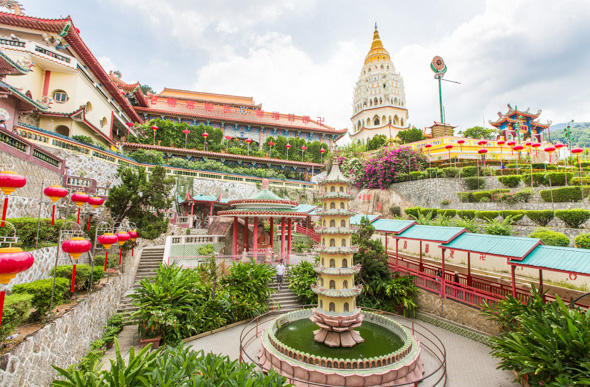 The last attraction we wanted to see in Penang was the Kek Lok Si Temple, the largest temple in Southeast Asia. Climbing all the way to the top got a bit sweaty, but the colourful gardens and enormous prayer rooms were well worth it. Fortunately, we stocked up on water bottles beforehand. 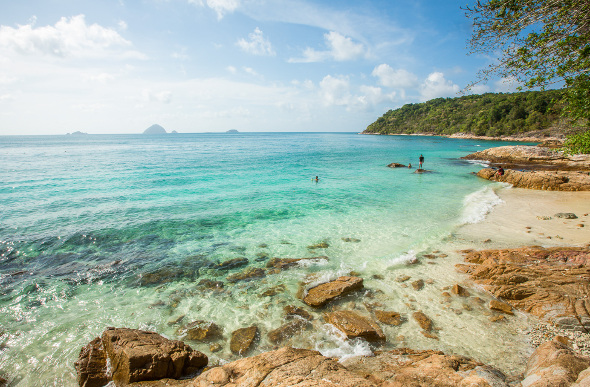 After limited sleep on an overnight bus across the country, we caught a sunrise ferry out to Perhentian Kecil, a resort and backpacker island off the east coast of Peninsular Malaysia.

The sun came out to help wake us and the scenery delivered as idyllic a setting as we could have expected from the famous tropical island. 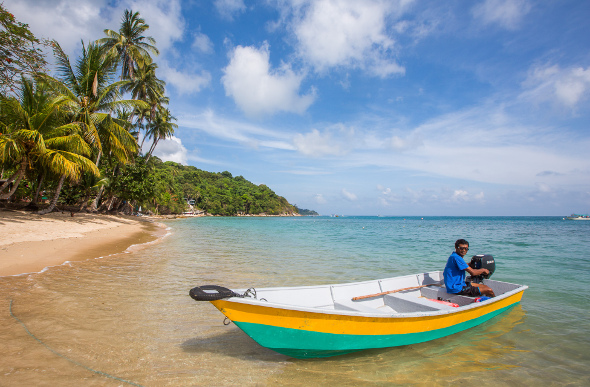 The Perhentian Islands had no roads, so we used water taxis (above) to get around quickly. Friendly drivers were happy to take us anywhere on the coast, and we were able to request a drop off at a secluded beach, which we had to ourselves all afternoon. 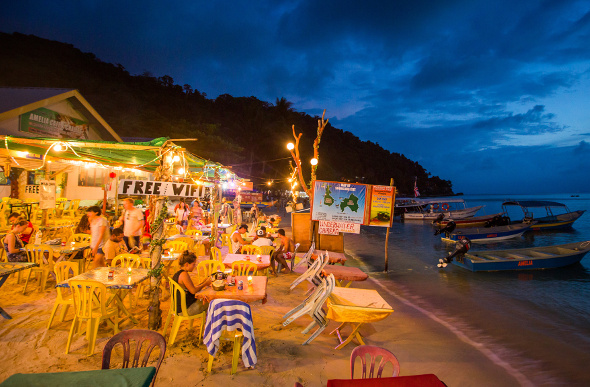 Evenings were equally as lovely as the daytime on the island, as the strip of hotels and restaurants on the main beach lit up for true waterfront dining.

The local seafood specials were great, and we washed dinner down with beers in front of a twilight cinema at our hotel’s bar. We met a great range of people from all different countries and shared travel stories together until closing time. 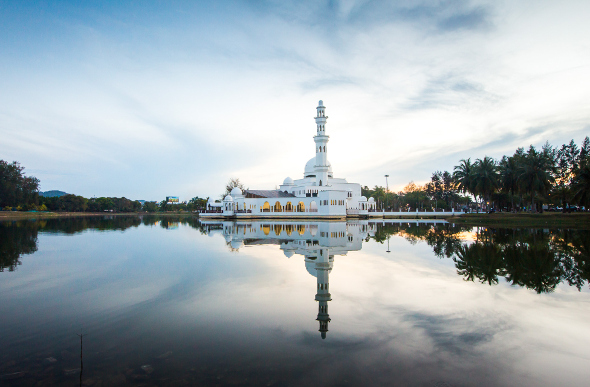 Our last stop was another bus ride further down the east coast at the muslim city of Kuala Terrenganu. A bit far from the usual tourist trail, we found a compact, but busy city filled with friendly locals, bustling night markets and the unmissable Tengku Tengah Zaharah Mosque (above).

The mosque and its crystal-clear reflection filled with worshippers as the sun set on another day in Malaysia – sadly our last!

For a short trip that came about right at the last minute, we were blown away and returned home with numerous memories and photographs to cherish.

Visit your local Flight Centre store or call 131 600 for more advice and the latest deals on travelling to Malaysia.