After a few years of exciting travels around the world, I realised how little I had actually experienced of my home state's world-famous coast and reef.

With help from a well-timed holiday package deal, I took off up Queensland's shoreline with a group of local and foreign friends. We made it to Airlie Beach, but didn't stay long before setting off for a two-night sailing trip around the remarkable Whitsunday Islands. 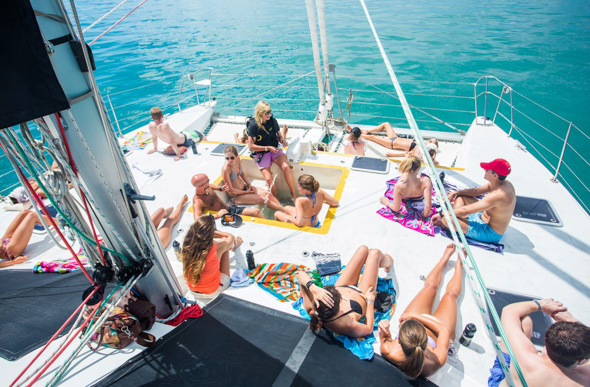 We boarded the sailboat around early afternoon with 15 other travelers and immediately claimed our spots in the sun on the surprisingly roomy surface deck.

The deck even included a seawater ‘Jacuzzi’ (seen filling up in the middle of the photo) that helped keep everyone cool during the hottest hours of the day. 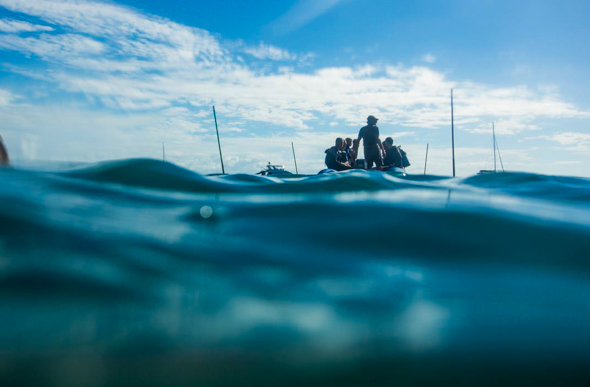 Small groups of divers were taken out multiple times each day to explore the nearby reefs and wildlife.

My underwater camera case couldn’t handle the depths of the dives, so I stayed close to the surface with my snorkel. The above low angle shot captured my friends heading out on their first dive. 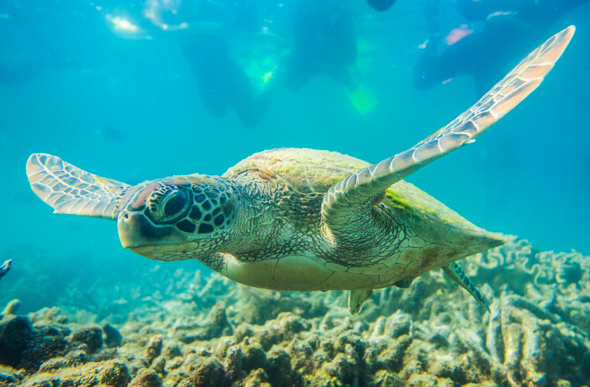 I wasn’t able to get as deep as the scuba divers, but luckily there was still an abundance of sea creatures to spot near the surface. The highlight was spotting a gorgeous and very laid-back green sea turtle who ended up being quite the poser! 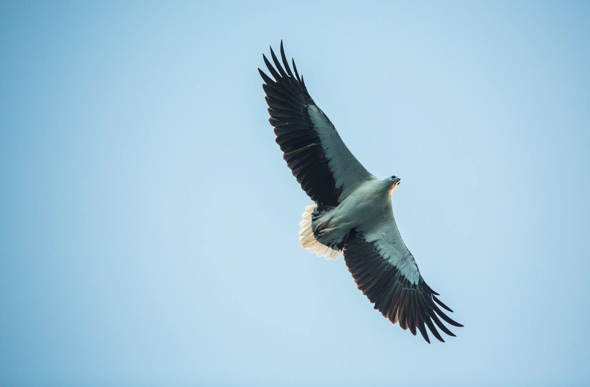 The wildlife spotting continued on our first evening. The captain sent out bird calls and managed to attract a white-bellied sea eagle. The eagle made impressive acrobatic loops around the sail while returning our captain’s screeching calls. 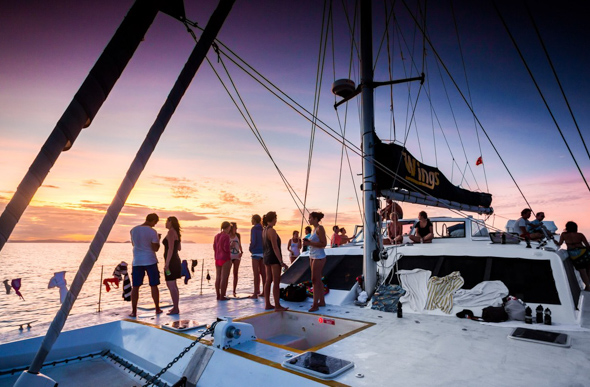 After such a fantastic day, I was itching to shoot a beautiful sunset over the water. Beer and wine was passed out as we watched the sky cycle through a vibrant mix of reds, oranges, yellows, pinks and purples. 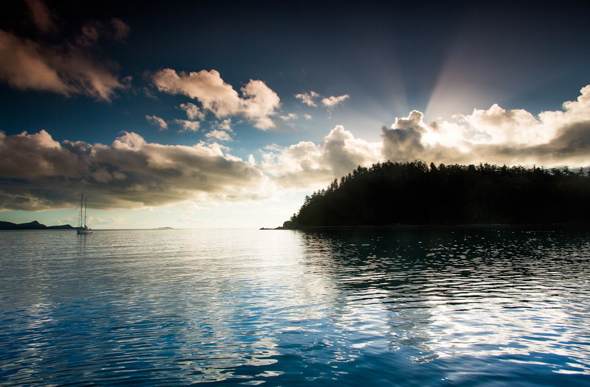 After being warned about temperamental tropical weather, I had my fingers crossed the fine weather would continue. I was rewarded with a gorgeous sunrise as we approached the next anchorage near Teague Island. 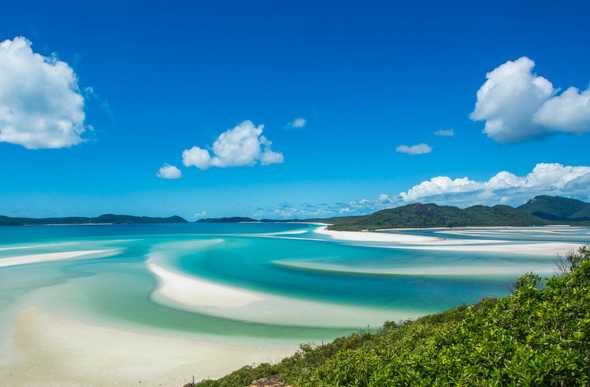 If there’s anywhere in the Whitsundays you pray for perfect weather, it's on Whitehaven Beach. The coast was a mesmerising collage of powder-white sand and ethereal blue water.

We made the briefest of stops at the viewing platform to take photos, before rushing down the mountain track already aching for a dip. 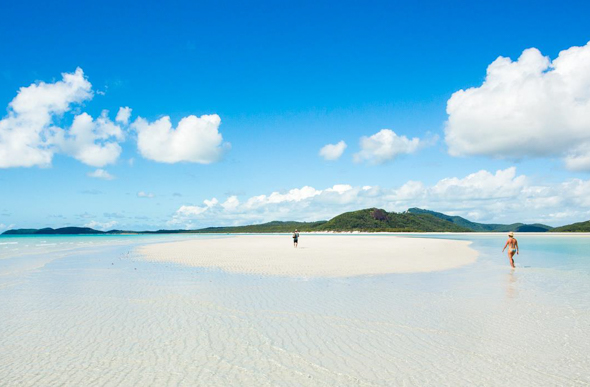 Even after growing up on Aussie beaches and visiting some of the world’s most famous tropical islands, I was in absolute awe of Whitehaven.

I've never experienced an equivalent to its vastness, especially at low tide. We were able to walk hundreds of metres out across the soft, white sand and clear water. 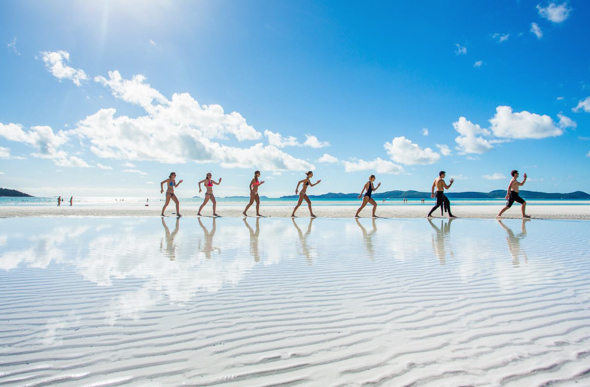 After sunning ourselves in the warm shallow water for a couple of hours, we finished the afternoon with a fun photo shoot that took advantage of reflections in the still water.

I couldn’t resist sending these photos to another group of friends who had decided to visit a cold and cloudy Melbourne instead. 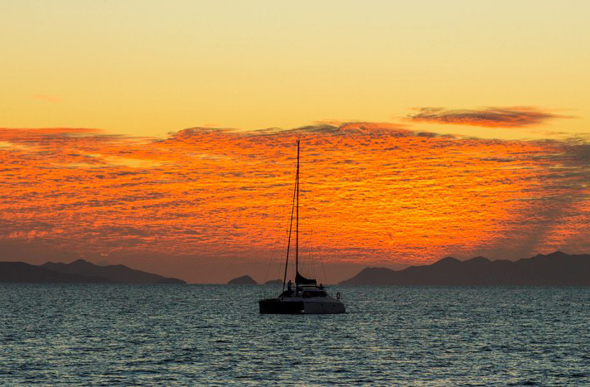 I hoped our final sunset of the trip would live up to the first. After disappearing behind low-lying cloud for a few minutes, the sun put on one final show, lighting up the sky with bright orange streaks behind a fellow sailboat.

We arrived back on Airlie Beach late the next morning just as storms started to roll in. I thanked our fortunes for providing two perfect days out on the water.

I returned to Brisbane with tanned skin, a refreshed mind and an overwhelming sense that I'd experienced one of Australia’s most beautiful areas at its absolute best.