My head was starting to clear and through somewhat sobering eyes I could recognise Pittsburgh's Rivers Casino. The 6am crowd wasn't pretty. We were bedraggled and less concerned about our inevitable financial crippling than any good father would recommend.

I had abandoned the roulette table an hour ago, along with some sixty American dollars, and now walked through aisles of slot machines searching for Nate, a casino fiend who once funded a five-month European trip off the back of craps winnings.

He had better luck than me. Or was it perseverance through losing? Because those who win a lot in casinos tend to lose more, even when they come out in the black.

I'd visited the casino before, about a year ago, when I'd spent three hours swallowing crab legs and mimosas at the Grand View Buffet's bottomless brunch before a Pirates game.

And what a view. With an outlook over the confluence of the Ohio, Allegheny and Monongahela rivers, the casino's Pittsburgh vista is beaten only by the lookouts on Mt Washington. 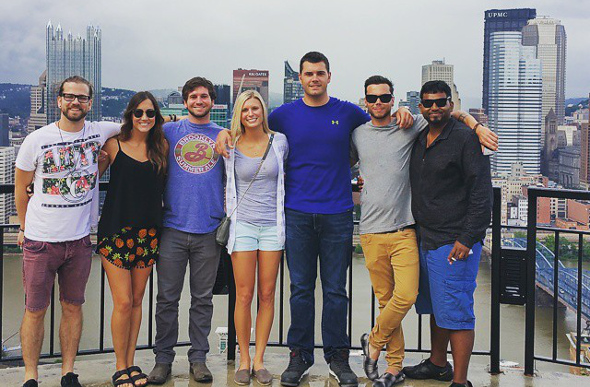 I'd been visiting the same Pennsylvanian native back then as well. I avoid tours, but seeing a city with a local, especially one who is a friend through mutual interests, is a lot more rewarding and easy going.

Back to business. I was lost amongst parlour games and a security guard had just noticed my disjointed gait. I sat down at a mermaid-themed slot machine and concentrated hard on looking like an affluent gambler.

We had driven into the city earlier that day after stopping for a cleansing ale at 3 Rivers 6 Pack. I ordered an IPA from the extensive craft beer selection and added SEXXY sauce to my fries. Good name; better taste.

I've descended into Pittsburgh during summer and winter. The latter is far superior. The scene outside warrants a Disney theme park. White-capped houses sit on the sides of mountains that bloom up around the city and the three rivers seem to touch everything.

The locals refer to themselves as 'Yinzers', a name mostly given with fondness. They aren't your typical inner-city dwellers, adept at starting camp fires, navigating forests and catching their food.

But this surprises no one who realises how much Pennsylvanian wilderness sits right outside the city. With Ohio Pyle for white-water rafting, Seven Springs Mountain Resort, Two Lick Lake and camping at Deep Creek, you've got quite the year-round outdoor playground. 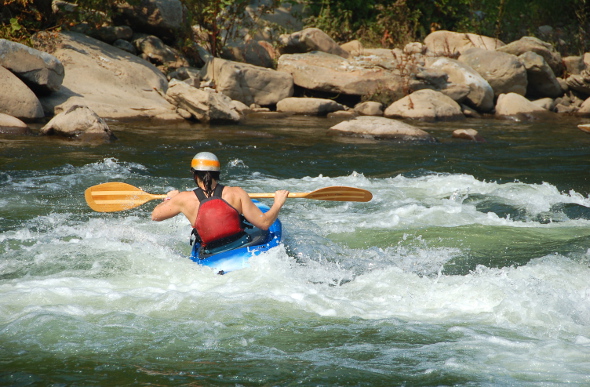 Kayaking is one way of taking on the rapids at Ohio Pyle (Image: Getty)

Life within the city limits looks very similar: 712 outdoor stairways; almost 100 kilometres of hiking trails; 61 kilometres of river shoreline. But these are all numbers. What is the vibe? What is the feel of the city?

You need to hang around to find out. And you need to explore. It varies from one side of the river to the other; from one block to the next.

In Allegheny-West it's sport. Walk down North Shore Drive from Heinz Field to PNC Park and you'll pass by a queue of sports bars, merchandise shops and the frenzied supporters who frequent them.

PNC Park, home of the Pittsburgh Pirates MLB team, is still one of the most stunning stadiums I've ever entered. The game was forgettable – a 2-1 rained-delayed Pirates win – but the sight from the bleachers out across the baseball diamond to the Allegheny River was a beauty.

To this day only three balls have ever been hit on the fly into the river, but just the possibility of another heightens the excitement whenever a batsman steps up. 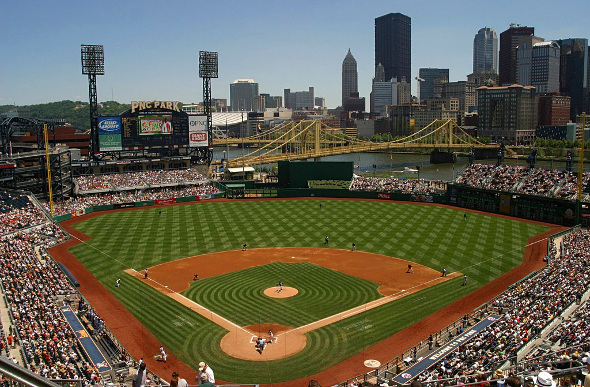 Pittsburgh's PNC Park is one of the most beautiful sporting venues in the world (Image: Wikipedia)

Mount Washington draws the fine-dining crowd, but only those willing to pay extra on 'Restaurant Row' for meals accompanied by Pittsburgh's best view. During the day it's splattered here and there with tourists who drift from the boutiques and bars to the viewing platforms and back again.

Jump on the century-old Duquesne Incline cable car and ride down to Washington's base where you'll find Downtown, Uptown, Shadyside and South Side.

There's a harmony to Pittsburgh's nightlife districts. None of them are really competing for the same clientele, but all have something to contribute to the city's 2015 status as America's 'Top Food City' according to Zagat.

Downtown targets the gourmet foodies with award-winning restaurants and dinner bars, while Uptown dons a little more glitter and a little less clothing with its dance and strip clubs.

Shadyside is essentially Downtown for 20s and 30s, with more beanie-toting bartenders, cheaper eats and an influx of college kids.

Weekend madness, however, is found in South Side on East Carson Street where two rows of bars, gyros shops and restaurants are religiously swarmed by rowdy partygoers come Friday night. If you can't find a good time in South Side, kiddo you might have a problem. 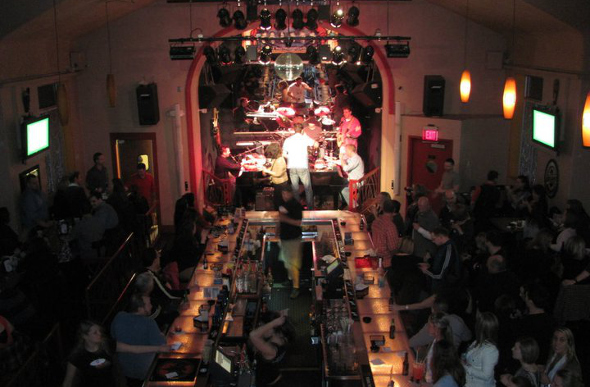 This was exactly where we found ourselves – a boisterous bunch of Yinzers, Canucks, one Southerner and an Aussie – at about 10pm on Saturday night, bunkered down in Lesvos Gyros engulfing a late dinner.

We needed the extra stomach lining, because Charlie Murdochs Duelling Piano Bar was selling buckets of beer at $2 a bottle. Up on stage the pianists played song requests at key-burning speed, while the bar steadily filled to maximum capacity.

But it wasn't the pianos everyone was coming to see. The band that followed was led by Pittsburgh's version of Angus Young: a short, string-haired rock veteran who got his jollies playing his guitar on the bar counter using a beer bottle instead of his left hand.

Afterwards, we assailed the city's nightlife like some Amish kids on Rumspringa, charging from one bar to the next until Pittsburgh's 2am closing time.

Four hours later, the mermaid slot machine was adamant it wasn't accepting my crumpled two-dollar bill. Security had moved on, so I continued my search for Nate, finding him at the roulette tables having just reached his losing limit. 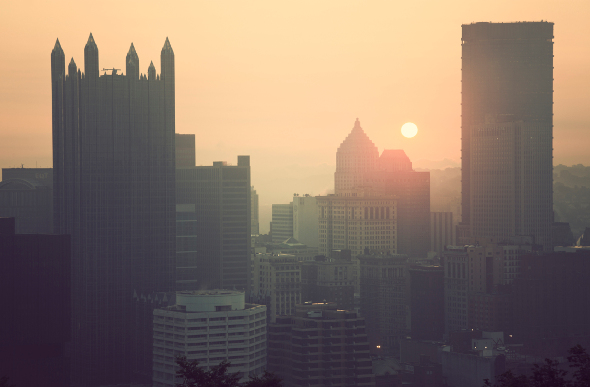 Sunrise over Pittsburgh, with the 'Batman tower' (PPG Place) on the left (Image: Getty)

Sunrise in Pittsburgh isn't half bad from the smeared window of a cab. I would've preferred to see it from Mt Washington after a good night's sleep, but it still had a touch of glamour, shimmering off the iconic 'Batman tower'.

Pittsburgh has always been a bad influence on me, constantly finding ways to keep me awake for "one more hour". But as I belly-flopped into bed, my discontent wasn't directed at the five hours left before checkout. It was the fact we were checking out of a city I wouldn't have minded calling home, at least for a few more days.

Visit your local Flight Centre store or call 131 600 for more advice and the latest deals on travelling to Pittsburgh.