Miran, our guide, used his flashlight to point into the crystal clear rockpool. “There. You see it? That’s the proteus. It is very rare, even here in the Postojna Caves.”

We had to admit the pure-white, eel-like amphibian was a strange sight, but then everything in underground Slovenia was proving otherworldly. Also known as the “human fish” for its pale, fleshy colouration, the proteus can live for more than 100 years, survive 14 years without food, and dwells, Gollum-like, among the innermost recesses of these caves.

We were completely off the grid in Postojna, one of world’s longest karst cave systems.

A late June discovery brought the system's length to 24 kilometres, with the possibility of it reaching more than 31 kilometres via a yet-to-be-found link to the neighbouring Planinska cave.

This was a breathtaking and bizarre world of stalagmites and stalactites in bewildering colours, shapes and sizes, from slim spaghetti-like stalks to towering 17-metre columns that took more than 14,000 years to form.

We had already spent two hours exploring the alien landscape on a purpose-designed 1920s railway that travels for 2 kilometres inside the vast system, passing through cavern after cavern, passageway after passageway and gallery after gallery of colossal limestone features, created by erosion, rainfall, earthquakes and even wind. 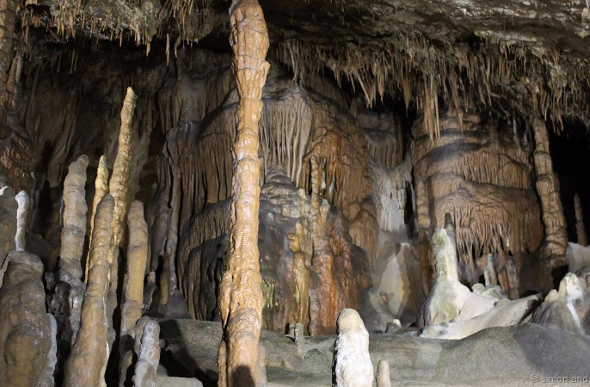 The bewildering array of spikes and shadows (Image: Simon and Susan Veness)

The impressive final chamber, known as the Concert Hall, was used for large gatherings in the 1800s and early 1900s due to its great acoustics.

It could comfortably hold 10,000 people and has enthralled the likes of Archduke Ferdinand I, Emperor Franz Joseph of Austria and Benito Mussolini. It is still occasionally used for music performances.

From here, Miran took us off the regular, lit paths and we continued on foot into the depths, where the Pivka River that carved out this immense range of caves quietly bubbled.

Here, about 110 metres below ground, was the unimagined, lightless world of the proteus and other bizarre subterranean creatures, including rare species of fish, shrimp and even spiders. 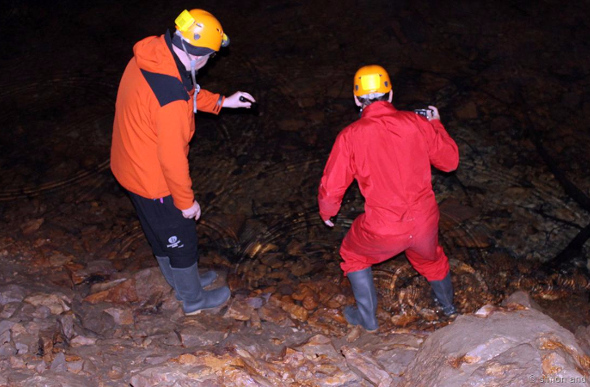 Exploring the waters for the proteus (Image: Simon and Susan Veness)

Postojna has been known as the cradle of speleobiology, the study of subterranean flora and fauna, since local explorer Luka Čeč discovered the cave beetle here in 1831.

Scientists have since identified 114 endemic species – including the otherworldy proteus – as well as an array of prehistoric animals such as cave bears, hyenas and even rhinos, that pre-date the last Ice Age.

If we switched our helmet lights off, the darkness was sensory deprivation of the most extreme kind. When the first extensive exploration of the caves was carried out in 1818, the intrepid souls had somehow explored using only candlelight and fortitude.

It completely boggled our minds.

“Hey, listen to this,” said Miran as we passed an array of stalactites that looked like a pipe organ. He tapped out the unmistakable first few bars of Deep Purple’s Smoke on the Water on the slender, hollow columns. “Now, that’s real rock music,” he grinned, lightening the mood.

Postojna is just one of 23 explorable caves in Slovenia’s karst territory, which makes up the history-rich southwestern portion of the country and includes prehistoric settlement sites dating back more than 5,000 years.

Here, rivers and underground lakes have carved out many of the underground features that attract more than one million visitors each year.

About 30 kilometres southwest of Postojna are the less developed – but just as stunningly beautiful – Skocjan Caves.

This Unesco World heritage site, dubbed “the underground Grand Canyon”, is an underworld of such enormous vertical dimensions, it was as if we had stumbled upon some mad collaboration between Jules Verne and Peter Jackson. More than 120 metres below ground, mist from the river spume filled this otherworldly vista of precipices and passageways with an eerie glow.

In the largest of the four main caverns – the evocatively named Thunder Canyon for the torrent that roars its way through the lower strata – the roof loomed high enough to swallow a 45-storey building.

Below, the foaming Reka River was straddled by the 14-metre Cerkvenik Bridge, a daring feat of engineering that mimics Tolkien’s Bridge of Khazad-dum.

The chill of the air was exacerbated by the 95 per cent humidity from the river spray, giving the canyon the feel of a ghostly hollow. If one of Jackson’s cave trolls, or even a fire-breathing Balrog, had appeared from the depths, we wouldn’t have been surprised.

Amid the gloom, we could just make out a rude stone staircase carved out of the far wall by the first visitors, testament to another group of explorers who had passed this way in 1851.

Returning to the main canyon, we exited through a gaping 15-metre hole at the bottom of a deep sinkhole, where the Reka River once wreaked havoc on the soft limestone and scoured the far-reaching caves behind us.

Our final stop was at the Predjama Caves, some 40 kilometres to the northeast and just 10 kilometres past Postojna.

Despite being less developed than Postojna and Skojcan, the site wowed with its scenic beauty; a 700-year-old castle is wedged into the cavern’s gigantic opening. A medieval monument of dazzling engineering skill, the castle and cave were somehow a single entity, with the hand of man dissolving into the natural rock with breathtaking organic grace.

Hollowed out by the River Lokva, which now disappears underground at the base of the craggy cliff that encompasses the castle, Predjama’s depths can only be explored by small-scale tours in full caving equipment.

However, the castle itself is a fascinating study in 15th-century living, including period furniture, kitchen fittings and – even in early summer – the sense of how chilling this cave-like location could be.

Here, we learned the story of Slovenia’s “Robin Hood”, the knight Erazem Lueger, a local folk hero who supported the poor of Hungary during the 1477 to 1488 wars with Austria.

The story goes that Lueger defied the Austrian emperor from the safety of this castle-cave stronghold in 1483, using a secret entrance at the cave’s top to replenish his stores in the face of a year-long siege. However, a servant finally betrayed his whereabouts and led to Lueger’s sad demise – with a well-placed cannonball to the knight’s toilet in an unfortified part of the castle!

This story provided a quasi-comical ending to our cave tours, but nothing could remove the sombre feeling of having travelled through a rare and overpowering part of Slovenia, a secret world of hidden treasures and surprising history.

Visit your local Flight Centre store or call 131 600 for more advice and the latest deals on travelling to Postojna.

This article was written by Simon and Susan Veness from BBC and was legally licensed through the NewsCred publisher network.