Sit back and have a read about the latest, the hottest and the newest from Australia’s Sunshine State. Get to know some fun-loving siblings from My Kitchen Rules; take a hike along the Gold Coast Hinterland Great Walk; test out Brisbane's Riverwalk; check out some Queensland record-breakers; disconnect from your devices; and take a dip in an infinity pool. Your Queensland holidays are sorted.

Get To Know Elle & Jake Harrison

Since winning the silver medal on My Kitchen Rules in 2013, these fun-loving siblings have converted a six-metre shipping container into an Italian-style cafe at Brisbane’s Eat Street Markets. Here's what Elle & Jake Harrison have to say about Queensland.

Queensland has so much to offer. Even though we have been based more so in the south-east region, we have been lucky enough to sail the Whitsundays, holiday on Hamilton and Daydream islands, sunbake on Whitehaven Beach, host the Australian Italian Festival at Ingham and Gladstone, plus take a road trip from Brisbane to Rockhampton.

The best part in general would have to be the coastline and beaches. There’s nothing more spectacular than lying in the sun, or dining at a seaside restaurant and indulging in amazing seafood that was caught only a few kilometres away from the shore.

We can’t get enough of food – it’s in our blood. Our family comes from generations of farming, so from bananas to pineapple and cane, Queensland has an abundance of tropical produce that goes perfectly with our weather and our laid-back way of life.

The Gold Coast now has some competition when it comes to nightlife – Ocean Street in Maroochydore on the Sunshine Coast has really, really taken off! There are so many restaurants, all funky and affordable, not to mention the bars and bar food on offer.

When it comes to relaxing, there’s no better place than the Sunshine Coast. We are originally from the coast, and since moving to Brisbane we realise we may have taken it for granted. Oh, and we’ve got a secret: just north of Noosa there is a collection of beaches, from Double Island Point to Rainbow Beach, where the serenity is second to none – perfect for a day out or a week-long camping holiday.

Curious about 1770? The Queensland Town Where Time Stops

Can't get enough of sun, surf and sand? Queensland's Best Beaches As Voted By You

Novice hikers will enjoy the Gold Coast Hinterland Great Walk (best between September and April), a 54-kilometre trek that takes in mist-covered mountaintops as it coils the World Heritage-listed Gondwana Rainforests.

Ngaro Sea Trail (best between May and November) is the waterview trek to do. Feel the sea breeze through your hair as you meander through open forests and ascend rugged peaks from Whitsunday Island to South Molle and Hook Island. 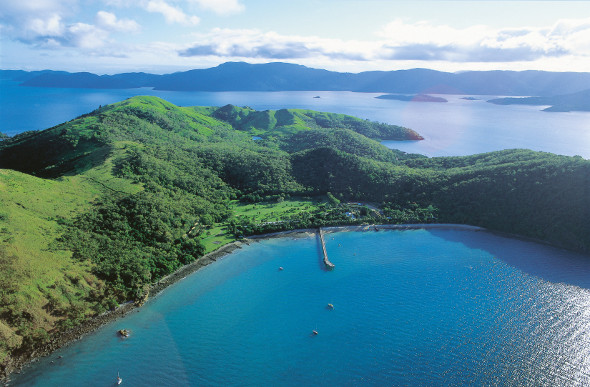 If you fancy yourself as a pro, why not commit to the 90-kilometre Fraser Island Great Walk from Dilli Village to Happy Valley (great at any time of the year). On the way you’ll be able to enjoy views of the towering rainforests, crystal-clear water and coloured sands of the world’s largest sand island.

Or try the 30-kilometre Whitsunday Great Walk (best between April and September), taking you through Conway State Forest. The route is full of cliff edges and steep elevations but offers magnificent views of the Whitsunday islands.

If there’s one thing Aussies do best, it’s dusting themselves off and pushing through a crisis together. In September last year, Brisbane’s New Farm Riverwalk was officially reopened after a section of it was washed away in the devastating 2011 floods.

With the city skyline as the backdrop, the 900-metre walkway is split into designated sections for cyclists and pedestrians – so everyone’s got their own space. 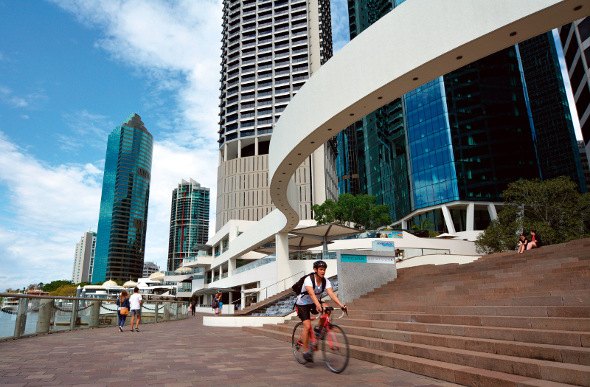 Looking to unwind and disconnect with the world for a while? Try one of these solutions … or try them all.

One of the most talked-about retreats, multi-award winning Gwinganna in the Gold Coast Hinterland aims to soothe your soul and inspire you to live a healthier life. Wellness packages range from two to seven days and focus on organic living, spa, movement and relaxation in a low-tech environment of refreshing mountain air. 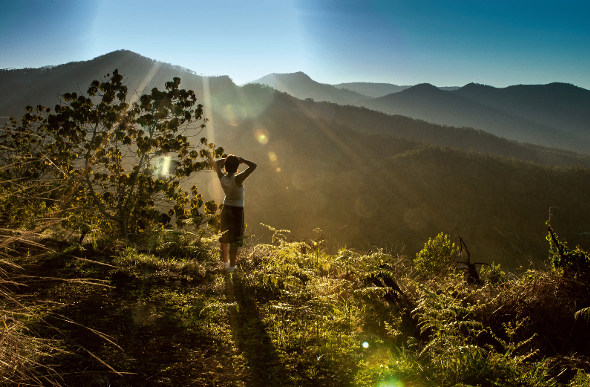 When you’re ready to throw your computer against the wall and flush your mobile down the toilet, it’s time to book a date with Eden, where there’s no alcohol, coffee or smoking, nor laptops, phones or radios. Apart from the guest computer and payphones, you’ll be truly disconnected from the world – and it’ll be so worth it!

To completely cut yourself off, camp on the sands of Lady Musgrave Island, a tiny coral cay right on the Great Barrier Reef, almost 100 kilometres north-east of Bundaberg. There’s no electricity, only composting toilets, an emergency radio, fuel storage and a compressor bunker. It’s ideal for swimming, snorkelling, diving, walking and relaxing – just make sure you pack food, water, a torch, a first-aid kit and insect repellent. Ultimate digital detox bliss.

The buzz term among hoteliers right now is ‘infinity pool’ – and guests can’t wait to dip their feet in. Infinity pools give the illusion that they’re extending to the horizon and are often positioned with oceans as their backdrop.

Yeah … pretty spectacular, we know. So it’s no surprise that you can find two of the best in Queensland’s Whitsundays. Hamilton Island’s Qualia has not one but two infinity pools by which you can sip cocktails.

Fifteen minutes from Mackay’s city centre, Shoal Point Beach at Shoal Point is one of the best family-friendly fishing spots. Not only are there barbecues on site, the water remains fairly shallow – ideal for apprentice anglers. 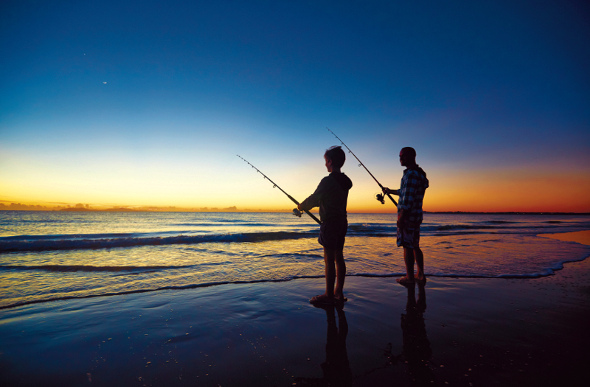 Considered Australia’s best family fishing competition, the Boyne Tannum Hook Up at Bray Park, Boyne Island, offers cooking demonstrations, rides, food and entertainment for the whole clan – oh, and a few competitions, too. Proving its popularity, the event will be celebrating its 20th anniversary in June 2015.

The world’s two largest sand islands – Fraser and Moreton – both have unspoilt beaches that extend for kilometres and are accessible only via 4WD, meaning an ultimate island getaway fishing experience. Anglers can simply cruise up the beach, park, and throw in a line. The blinding white sand backdrop ain’t a bad view at all. 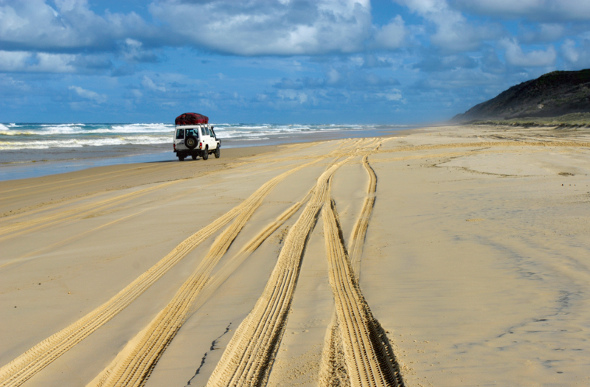 Drive up the beach, park, and throw in a line.

Let’s face it: Queensland is known for its beach vibe. And since visitors and locals alike spend endless hours on the sand and in the ocean, it would be remiss of us to skip past the best beach shacks the maroon state has to offer …

Juxtaposing this modern, two-storey eco-lodge against the rugged landscape of Orchid Beach brings the best of both worlds. Features include four bedrooms (able to sleep up to eight people), an open-fire pit, barbecue and bar.

All freshly prepared meals, nature-based experiences and daily housekeeping are included in the tariff, as is sunscreen and insect repellent, so you’ll only need to pack toiletries, sunnies and casual clothes.

If you’d rather something a bit less secluded, you can’t go past this beautiful beach house. Complete with designer furnishings and Asian antiques, it can sleep up to seven people.

Sitting right across the road from the beach, this home provides the perfect opportunity to wake up to the sun rising over the ocean or spot whales swimming by. Or you could always head to Noosa National Park, just a short stroll from the house … or simply laze on the sun lounges by the saltwater pool.

Discovered by Captain James Cook in 1770, the aptly named Town of 1770 is blessed to have warm weather year-round and an amazing atmosphere. Four self-contained bungalows – Sunset (sleeps six), Lighthouse (sleeps six), Escape (sleeps five) and Tree House (sleeps two) – offer views of the southern Great Barrier Reef. Ideal for a couple’s getaway, family holiday or, well, any excuse will do …

Cruise the Sunshine Coast in a Harley Davidson with Freedom Wheels and be the coolest kid on the block.