Rebuilding the Community Spirit of Christchurch

Rebuilding the Community Spirit of Christchurch

On a vacant site on the corner of Cashel Street and Oxford Terrace in Christchurch is a rather unusual sight. An al fresco dance floor, dubbed the Dance-O-Mat, has been installed. Curious passers-by have the opportunity of inserting a $2 coin into a converted washing machine to activate a sound and light show. What happens next is entirely open to the creativity of the enthusiast; this is their moment to bust out those dance moves and boogie to their heart's content. 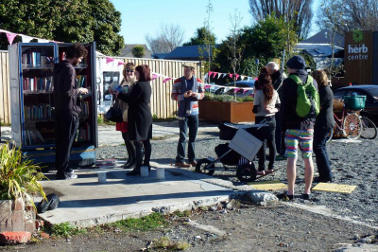 Christchurch is a city on the mend. The earthquake of September 2, 2010 and the even more destructive quake of February 22, 2011 not only destroyed a city but crushed the confidence of the local population.

The process of restoring the community spirit is being assisted through projects such as the Dance-O-Mat, a particular favourite of Coralie Winn, Director and Co-Founder of Gap Filler, an organisation responsible for encouraging community involvement through creative urban regeneration. Each project, known collectively as Gap Fillers, is installed on sites rendered vacant as a result of the quakes.

"All our gap fillers are different; there's a terrific breadth of the projects that we've done. But I really have a soft spot for the Dance-O- Mat. It really worked, people use it. It's not about creating pretty things to look at but to install projects that inspire their own subculture around them and are loved by the community," said Coralie.

"I also like the very humble, Think Differently Book Exchange. It's used by the community for reading and people use it to exchange books. It's really beautiful."

The concept of Gap Fillers began as an experiment after the first quake.

"It was started by three of us as an experiment as to what would bring life back to the city. The city was really struggling with a lot of talk of rebuilding. We didn't seek to set up an organisation," she said.

"But the community response was so positive; people participated and began suggesting ideas. We saw that it had a lot of potential to connect everyday people with their city. After the February quake, our little creative initiative was suddenly looked on to perform the role of healing, to meet a strong community need to deal with the trauma. We adapted and responded to their need."

When selecting appropriate projects to sponsor, the team at Gap Fillers work in two ways. They assess an available site and develop a project that's suitable or alternatively they develop an idea and find a space that will suit.

"We have our values by which we assess potential projects; is it experimental, is it leading by example, is it resourceful, who are we collaborating with, does the community need this? Hopefully other people will be inspired by what we're doing. We're essentially creating a social movement or a way of interacting with the city. It's not just gap filler that's doing this stuff, it's the community. It's social change." 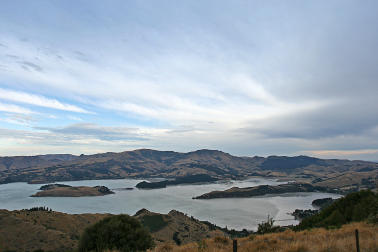 View from the Port Hills

After engaging with the various Gap Fillers scattered throughout the city, Coralie, who's been living in New Zealand since 2005 after moving from Adelaide, urges visitors to either cycle or drive up to the Port Hills.

"Port Hills, at the back of the city are really beautiful. They are only a 10 minutes drive from the centre of Christchurch or a 30 minute cycle but they are a wonderful place to walk or mountain bike. The view is quite stunning," said Coralie.

"For an escape, I really like Golden Bay, which is at the top of South Island. It's quite remote with beautiful beaches, walks and rock climbing."