Before you set foot on the train in Vancouver, you know the Rocky Mountaineer is not going to be an ordinary rattler. The terminal is humming with excited people and music, tunes being knocked out by a pianist to accompany the waiters handing out canapes.

Waiting outside are the carriages, resplendent in gold, navy and white livery. The full-service carriages, the Gold Leaf class, are easy to distinguish from the conventional ones. They are double-deckers, with the seating on the top encased in glass for maximum viewing pleasure and the dining areas below.

For many of the passengers chatting in the large reception hall waiting for the call to board, this journey will be a dream come true. The Rocky Mountaineer has won numerous awards as one of the world's great travel experiences, serving up a sensual overload of sumptuous food and drink to accompany the visual splendour that its meander through the Canadian Rocky Mountains provides.

When it comes time to board, a bagpiper finishes off what the pianist started. I can't help but feel I'm heading into battle on a troop train, but it is a fitting send off for what is an indisputably epic haul.

This year the Rocky Mountaineer is celebrating the milestone of operating for 25 years, but its routes take you through the history of Canada itself.

I'm on the First Passage to the West trip, from Vancouver to Banff via Kamloops and Lake Louise, which is just shy of 1000km and takes two days with a night stopover in a Kamloops hotel.

I've never flown first class on a plane before, but the Gold Leaf service on the Rocky Mountaineer is how I imagine it would be.

Big, comfortable seats with plenty of legroom, impeccable service, an amazing 270 degree view, excellent meals served in the dining areas below, complementary drinks and a running commentary on the local history and points of interest along the way from the carriage hosts.

The railway line you travel on is the sinew that binds Canada together. It was completed 130 years ago in record time and through some of the most challenging geography imaginable in a bid to thwart America's designs on British Columbia.

In 1867, newly independent Canada consisted only of the provinces of Ontario, New Brunswick, Quebec and Nova Scotia. The first Prime Minister, Sir John Macdonald, set about building modern-day Canada by promising to build a railway linking the east with west if British Columbia rejected the advances of the US and agreed to join his confederation.

It was a classic example of the old adage about the best pathway to success: bite off more than you can chew, then chew like crazy. 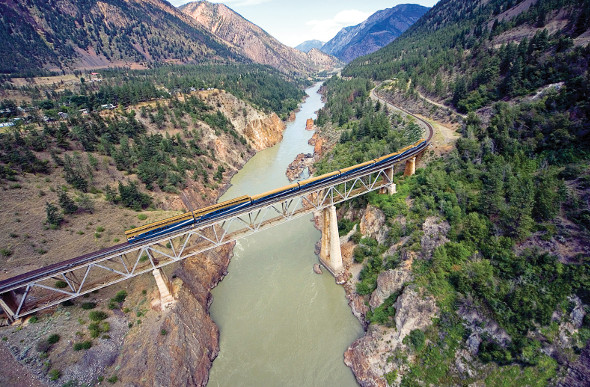 Canyon bridge over the Fraser - the line makes use of engineering miracles (Image: Rocky Mountaineer)

Surveyors first had to find a way through the Rockies and then an army of labourers armed with steam-powered drills, horse-drawn scrapers, gunpowder but mostly just their own muscles had to gouge out a path in their wake.

Many thousands of Chinese workers were brought in from California and Canton to do the heavy lifting, and without them the project would not have been completed. Casualties were high as many succumbed to the back-breaking work, scurvy, smallpox and careless use of explosives.

I wonder if any of them ever had the energy to admire the beauty of the region they were working in, or whether they had an inkling that one day their work would translate into one of the most spectacular rail journeys in the world.

And it is a spectacle. The journey from Vancouver follows the Fraser and then Thompson rivers, climbing through lush valleys, narrow gorges, and arid plains.

The lakes and streams you pass on the way start changing colour as glacial run-off fills them with "rock flour", finely ground sediment that turns the water a lovely opaque green.

As you reach Hell's Gate, the narrowest part of the Fraser River gorge, the enormity of the task of building this railway without modern technology hits you. 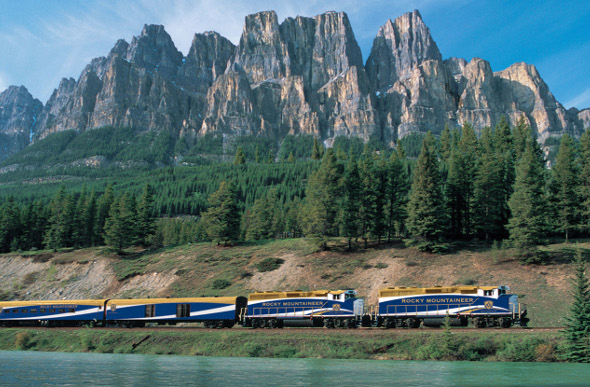 Sharp-eyed passengers delight in spotting wildlife. I saw a beaver frolicking in Shuswap Lake, unperturbed as the train trundled past. I'm told it is not uncommon to spot bears.

It's also an intriguing look at the challenges faced by the region's famous fish, the sockeye salmon. Their drive to spawn in the upper reaches of these rivers, having to navigate past thundering rapids, dams, First Nation fishermen using time-honoured techniques, other predators and numerous other obstacles is staggering.

No wonder they all die of exhaustion afterwards.

And as if the rushing rivers, deep-green forests and in places desert colours aren't beautiful enough, there are towering peaks looming over you for much of the journey, many of them snow-capped even at the height of summer.

Go sky high in BC. British Columbia’s Sea To Sky Gondola Opens A Once Unreachable World

The journey is unforgettable, for sure, but what lies at the end is just as impressive.

This Rocky Mountaineer route - there are others that take in Jasper, Seattle, or stretch all the way to the east coast of Canada - is very popular, largely because it features two of the most beautiful places in the world in Lake Louise and Banff.

I didn't know anything about Lake Louise. Didn't know it existed. Just thought it was another town on another pretty lake in a country that has lots of those. But to stay it is stunning is underselling it with an over-used cliche.

I can only ever recall being similarly struck by the majesty of a place, and that was when I clapped eyes on the Grand Canyon for the first time. This impossibly picturesque lake flanked by rugged mountains topped with glaciers is a must-see. 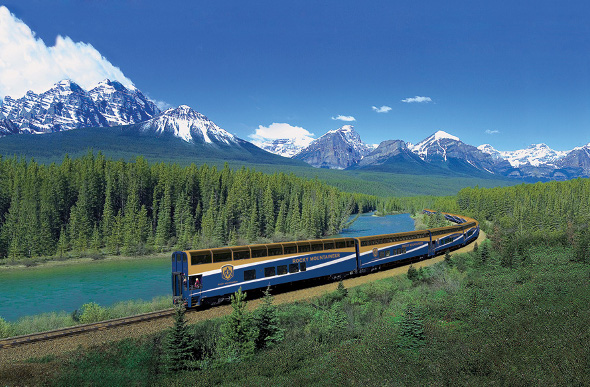 And when you go there, of the hikes you can do in the area the one I recommend is the Plain of Six Glaciers trail, which is a 15-kilometre round trip which will reward you with scenery that will take your breath away.

There are other hikes - some shorter, some harder - but that one is a cracker, literally, because there's every chance you'll hear and maybe witness an avalanche, as I did.

You can stay a night in the palatial Fairmont Chateau on the shores of the lake before reboarding the Rocky Mountaineer and continuing on to Banff, which is Canada's version of Queenstown.

Well-known as a ski centre and a magnet for young Aussies armed with Canadian working holiday visas, it is arguably a better place to visit in summer than winter. The scenery is dramatic, the air fresh and the village is packed with bars, restaurants and cafes catering to a very cosmopolitan crowd who visit here from all over the world.

There are hot springs, a gondola to take you nearly 2300 metres to the top of Sulphur Mountain to take in the panorama of the Rockies, myriad hikes, white-water rafting, zip lines ... you name it, there's plenty to do.

The first time I saw a poster featuring the Rocky Mountaineer, about 10 years ago, I marked it down as something I was going to do before I kicked the bucket. 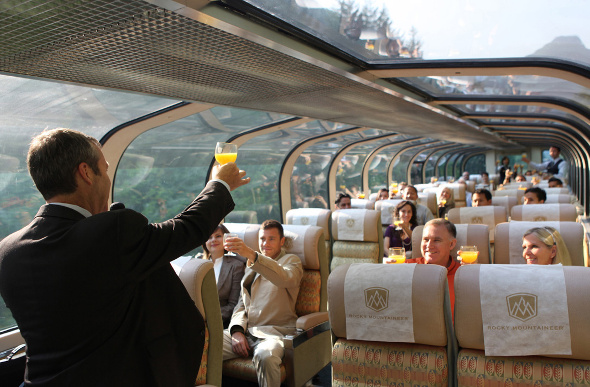 It's not a cheap ride. You're not going to find a bunch of backpackers on this train. It is a five-star experience with a price tag to match.

But is it value for money? When you take into account the excellence of the service, the food and the experience, it's hard to say it isn't.

You can take in a lot of the scenery by driving yourself along the Trans Canada highway - but the Rocky Mountaineer is much more than a train trip with good views. It's a journey through the spirit of a nation.

Visit your local Flight Centre store or call 131 600 for more advice and the latest deals on travelling on The Rocky Mountaineer through Canada.