A Rockies Train Journey Worthy Of The Fame

A Rockies Train Journey Worthy Of The Fame

No matter how many times you've seen the Canadian Rockies, they always take your breath away. The sheer size is overwhelming and beauty unrivalled. To experience this part of the world in style there’s no better way than Rocky Mountaineer.

Our journey began in Calgary, Alberta's largest city and gateway to the Rockies. First order of business was to refresh at our downtown hotel, the comfortable and spacious International Hotel and Suites, located two blocks south of the Bow River, a short walk from the Calgary Tower.

From the tower's observation deck we could see the distant outline of the mountains through the haze to the west: a teaser of our coming adventure. 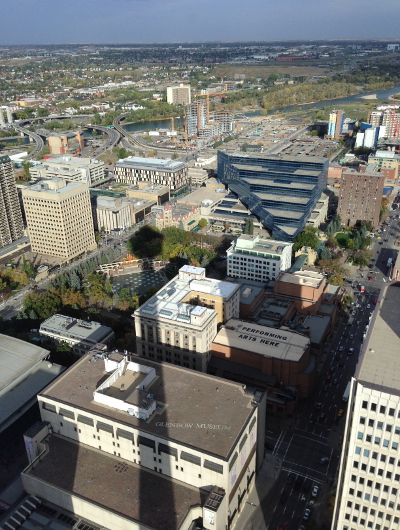 The view of the city from Calgary tower (Image: Kate Hamilton)

Handheld audio guides provided information about the buildings and neighbourhoods surrounding the tower including the Saddledome, home of the NHL's Calgary Flames; Stampede Park, where thousands converge for the annual Calgary Stampede; and Stephen Avenue, the shopping and bar district.

On the second day we boarded our coach and left the city. The road was accompanied by views of the Rockies and farmers' fields dotted with hay bales.

Eventually we reached Kananaskis, home of Kananaskis Rockies Heli Tours. After a safety briefing we climbed into the choppers in groups of four or six (be quick to elect yourself for a co-pilot seat). 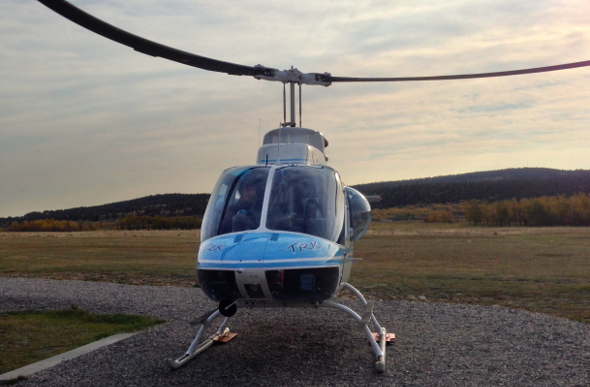 Upon liftoff, the thrill of actually being on a helicopter was soon eclipsed by the view of rolling foothills meeting a frontier of steep mountains. Autumn's golden leaves broke up the green as grassland transitioned into forest and emerald lakes sparkled in the valleys between barren peaks sporting spots of early snowfall.

Back on the coach heading to Banff, mountains lined the sides of the highway. After passing through the gates of Banff National Park, we stopped to see the Hoodoo and Secret Corner viewpoints, both of which provide outlooks of the landmark Banff Springs Hotel nestled in the valley.

After lunch in downtown Banff, we quickly visited Bow Falls before ascending Sulphur Mountain via gondola for spectacular views of the town and the surrounding wilderness. The 15-minute walk from the top of the gondola to the Cosmic Ray Station was well worth the effort. 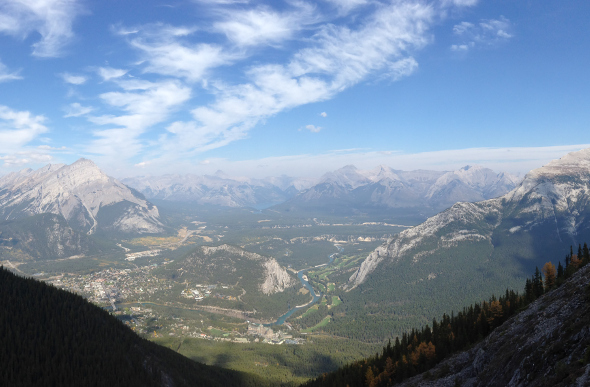 Soaking up the view from Sulphur Mountain (Image: Kate Hamilton)

We stayed at the Caribou Lodge and Spa, a 10-minute walk from downtown. The rustic rooms were clean, comfortable and recently renovated, and the huge indoor hot tub was great for soothing sore muscles. Dinner at the Keg Steakhouse introduced us to Alberta beef.

The next day we travelled to Lake Louise early for a photo op. The morning was cool and clouds hovered over the lake, but the view was memorable nonetheless.

The commentary from the driver was informative and amusing as we travelled along the Icefields Parkway from Lake Louise to Jasper. 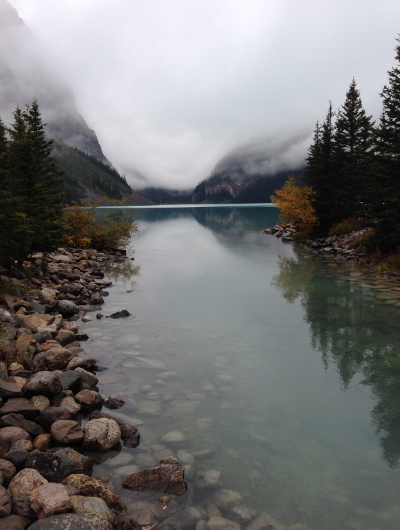 Lunch took place at the Colombia Icefield Centre, before an ascent up the Athabasca Glacier, the last half of which was achieved in $1.2 million Ice Explorer all-terrain vehicle.

I was most surprised that the surface wasn't flat. Instead, frozen waves heaved around us. Pocked with bumps and dents the ice shined blue through a top layer of snowy white. We filled our drink bottles with glacier water, told it would take 10 years off our faces.

The journey north through Jasper National Park was broken up with more photo stops at the North Saskatchewan River Valley viewpoint and Athabasca Falls. 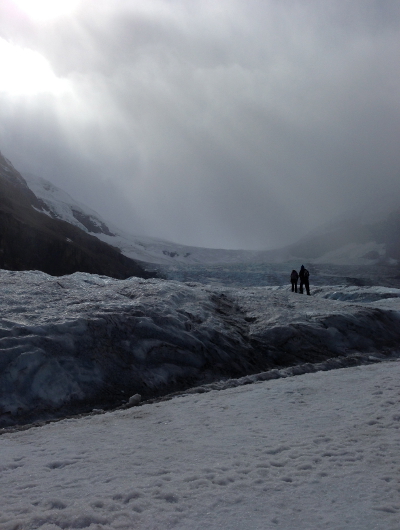 Approaching the town of Jasper we were treated to our first glimpse of roadside wildlife: a gang of elk, complete with 600-pound bull presiding over his cows in the heart of 'the rut' (mating season).

On the train tracks alongside Jasper's Main Street we came across another couple of gangs and several silly tourists getting dangerously close for holiday snapshots.

The next day began with a tour of the Jasper area. A guided nature walk at Maligne Canyon taught us about the formation of the canyon and the network of underground tunnels that connect the different bodies of water in the Jasper region.

We headed back to town for lunch at the Bear's Paw Bakery then to the visitor's centre for a look at the Friends of Jasper souvenir shop and to source sightseeing ideas from the National Parks staff.

A couple of us took up their suggestion to hike up to Old Fort Point. The trail was mostly flat and easy, but the final climb to the top turned steep. Thankfully it was short and the view was worthwhile. The town of Jasper stretched out before us, nestled in the valley. The clouds had cleared, revealing jagged peaks of the mountains around us.

A detour on the way back took us to where the clear, fresh water of the Miette River met the cloudy, glacier-fed Athabasca River. The entire walk took about two-hours, including ample time to soak up the scenery. 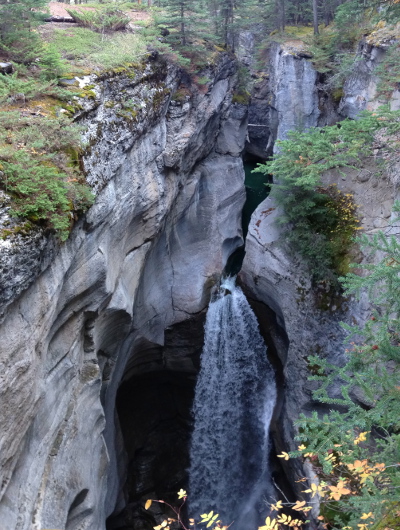 Above the labyrinth at Maligne Canyon (Image: Kate Hamilton)

Heading to Canada? How To Conquer The Great White North

All Aboard For The Holiday Climax

It was already day five when we woke for our earliest start yet in order to board the Rocky Mountaineer for the two-day The Journey to the Clouds train trip from Jasper to Vancouver.

We were seated in the Silver Leaf carriage (there are three levels: Red, Silver and Gold Leaf), accompanied by three hosts: Danika, Jamie and Chef Leah.

Nature and wildlife came thick and fast, beginning with a gang of elk. Some in our group were also lucky enough to spot a black bear (not me though). 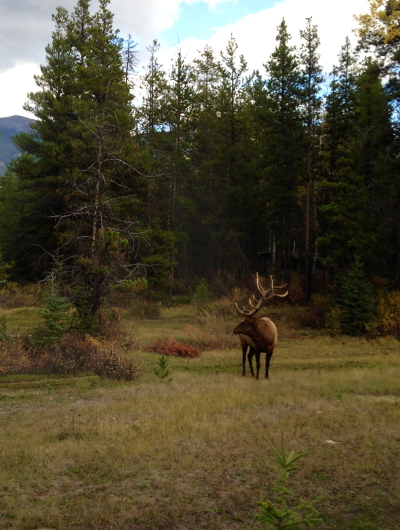 A tasty and plentiful breakfast was served at our seats. The journey continued, filled with scenery, socialising, taking photos from the outdoor viewing vestibule, indulging in a quick power nap, lunching on more delicious food, and repeating.

We passed by notable attractions including Mt Robson (the tallest peak in the Canadian Rockies), Little Hell's Gate and Pyramid Falls.

By afternoon we had left the mountains behind and arrived into the hilly terrain of interior British Colombia. Along the banks of the Thompson River the forests turned into semi-arid desert. 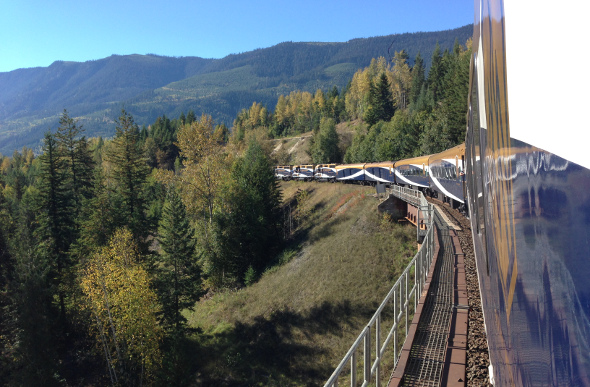 We arrived into the city of Kamloops in the early evening for one night at a hotel and a light dinner of caramel bacon popcorn and deep fried pickles at the Noble Pig Brewery.

Gold Leaf seating awaited us the next day on the Rocky Mountaineer's top floor as chefs prepared our breakfast in the dining area below: croissants, fruit platters and choice of a breakfast main.

We travelled about 35 kilometres along the banks of Thompson Lake, keeping an eye out for osprey, big horn sheep and bald eagles.

An unexpected three-hour delay highlighted the commitment the hosts have to providing the best experience. They kept us occupied with stories and trivia.

After lunch, we passed villages and towns more frequently as we moved closer to Vancouver. After a light dinner of Thai Chicken Curry we said farewell to our hosts and the luxurious train. 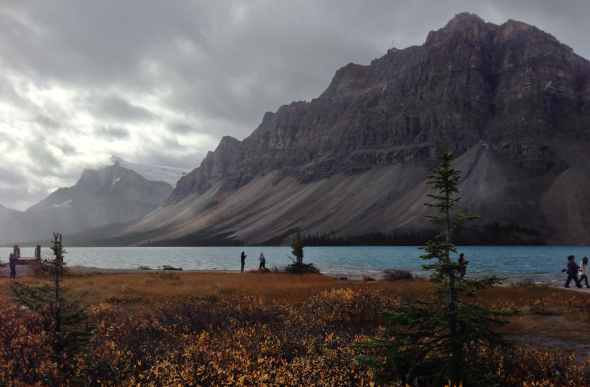 Bow Lake: One of the sights to catch during the Icefields Parkway route (Image: Kate Hamilton)

First up on the tour's final day is the city's newest tourist attraction, Fly Over Canada: an IMAX experience on steroids that allowed riders to experience the sights, sounds and smells that Canada has to offer from the comfort of moving movie-style seats.

From the vantage point of a helicopter, we visited 16 destinations from east to west. Despite being virtual it felt so real and was worth every penny.

After some shopping on Robson Street, we stopped for lunch at a hip cafe called The Noshery for soup, salad and sandwiches, before heading back to the hotel. The Georgian Court Hotel had a handful of complimentary bicycles for guests, which we took out for a spin.

It was a five-minute ride from the hotel to the waterfront. From there we made our way along the sea wall towards Stanley Park, considered by many to be the best park in the world.

Stanley Park was popular with walkers, joggers, rollerbladers and cyclists, all taking in the view across the bay to North Vancouver. The 20-kilometre ride took us about three hours, including ample photo stops and two slushy cocktails each (it was happy hour!).

That evening we headed to Granville Street for local nightlife, in particularly the recommended club, Roxy's. It was a rowdy party with an insanely talented rock'n'roll cover band.

Thankful for a midday checkout, I packed my suitcase before heading back to The Noshery for a breakfast sandwich and smoothie.

The free hotel shuttle took me to the Yaletown Skytain station. From there it was just a 25-minute, $4 ride to the airport. No stress.

Visit your local Flight Centre store or call 131 600 for more advice and the latest deals on travelling with the Rocky Mountaineer.