One of the most thrilling scenes in the new James Bond blockbuster, Spectre, which came out in Australian cinemas today, features 007 in an edge-of-your-seat car chase along the banks of the River Tiber.

Next year's remake of Ben-Hur - starring Jack Huston and Morgan Freeman - will also draw production crews to the Italian capital.

They're the latest in a long line of movies to showcase the Eternal City on screen. Here are five other flicks that'll make you want to visit Rome.

Federico Fellini's 1960 masterpiece was largely made in the studios of Cinecitta, south of Rome. But its most iconic scene was filmed at the Trevi Fountain in the cold of winter.

It's said Marcello Mastroianni (who plays philandering reporter Marcello Rubini) wore a wetsuit under his clothes and polished off a bottle of vodka before shooting the icy scene with Anita Ekberg (the Marilyn Monroe-esque Sylvia Rank).

Designed in the mid-18th century by Nicola Salvi, this flamboyant fountain - just east of Rome's Centro Storico - is currently being restored and is expected to open again in December. Swimming isn't allowed, but it's traditional to throw a coin into the water, using the right hand over the left shoulder.

The Trevi also makes an appearance in Roman Holiday, which came out seven years before La Dolce Vita and starred another reporter - this time, Gregory Peck as expat American Joe Bradley, alongside Audrey Hepburn (in her Oscar-winning turn as Princess Ann).

The couple take in a raft of big-name sights including the Spanish Steps (where Bradley encourages the princess to try a gelato) and the Mouth of Truth (a carved marble face that's said to bite off the hands of liars).

Then there's their chaotic scooter ride around the city, on which they veer down cobbled side streets and pass mighty landmarks such as the neo-classical Victor Emmanuel II monument (built in honour of the first king of a unified Italy). 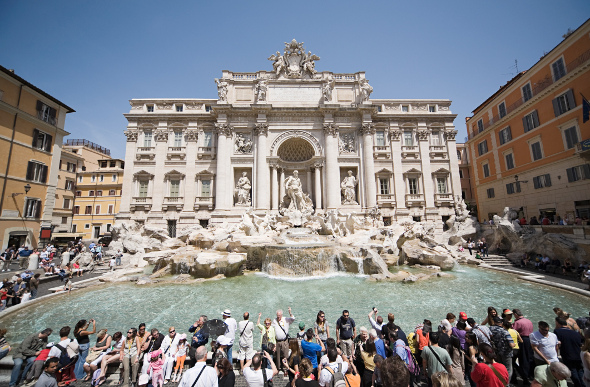 Scooters are a familiar, buzzing presence in Anthony Minghella’s glamorously directed psychological thriller starring Matt Damon and Jude Law. While some of the 1999 film's most alluring, sun-kissed scenes were shot elsewhere in Italy - notably the island of Ischia in the Bay of Naples - Rome takes centre stage for swathes of it.

The ancient ruins of the Roman Forum, the sculptures of the Capitoline Museum and Piazza Navona - where the brash Freddie Miles (Philip Seymour Hoffman) parks his bright red convertible next to Bernini’s Fountain of the Four Rivers - enhance the movie's cinematic appeal.

Although famous Roman icons like the Pantheon grace Ron Howard's filmic follow-up to The Da Vinci Code, it's the Vatican City, and the almighty St Peter's Basilica, that hogs the limelight.

Ironically, the Catholic Church banned Howard and co from filming in the Vatican or in any of its Roman churches, because it was so peeved with The Da Vinci Code (in which  it's speculated that Jesus fathered a child with Mary Magdalene).

To get around the problem, a scale model of the Vatican was built at an LA studio, while digital effects specialists used photos and footage taken at the actual Vatican site to produce convincing computer-generated images. 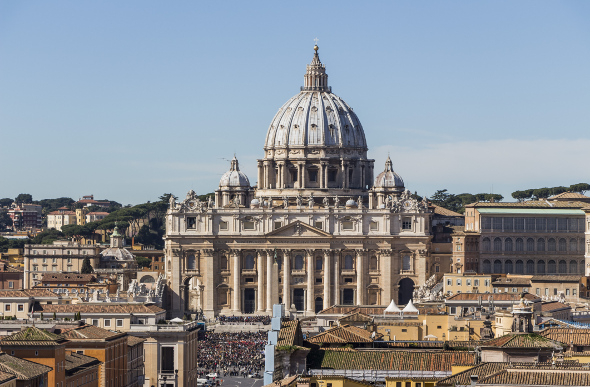 Although banned from filming inside Roman churches, the recognisable St Peter's Basilica still appeared in "Angels and Demons" (Image: Getty)

Such is the clamour surrounding this dazzling Paolo Sorrentino-directed affair - which scooped Best Foreign Language Film at last year's Academy Awards and has been billed as a "21st-century La Dolce Vita" - that the Roman tourist office has launched a DIY itinerary to inspire fans to retrace the footsteps of Jep Gambardella (the dapper old playboy performed with gusto by Toni Servillo).

Highlights include numerous grandiose palaces (including Palazzo Braschi), the Park of Aqueducts (where you can enjoy contemporary art performances), Via Veneto at dusk (an upscale street that also featured in La Dolce Vita) and the epic Colosseum (which was memorably brought to life, thanks to the wonders of CGI, in Ridley Scott's Gladiator).

Visit your local Flight Centre store or call 131 600 for more advice and the latest deals on travelling to Rome.