I first visited Moscow in September 1968. I arrived in the Russian capital just a week after Soviet troops had invaded Czechoslovakia.

I was an undergraduate at Oxford University at the time, studying modern history, and the head of my college had been British ambassador in Moscow. He reckoned that a spell behind the Iron Curtain would be an eye-opener.

He was right. I had never been anywhere so bleak. Communist Moscow was a grey and cheerless place. Being virtually car-less made it eerily quiet.

The red flags atop the Kremlin walls provided the only splash of colour that I can recall. There were no advertisements of any kind anywhere and in the poorly lit shop windows almost nothing (or nothing enticing) was on display.

I visited Lenin’s mausoleum (in Russia they pickle everything: cucumber, beetroot and former leaders) and bought an ice cream at Gum, the famous department store, but I can’t say I had a good time. I was on my own, and lonely. I met a few people who spoke English, and while they weren’t unfriendly, they certainly weren’t forthcoming.

It was not a jolly holiday and, when I left, I never thought I’d go back. And then, last year, my sister’s son married a Russian girl and moved to Moscow and (even more surprisingly) a Russian publisher decided to bring out one of my books (The 7 Secrets of Happiness) and invited me over for the launch.

Discover The Sheer Immensity Of Russia

After 46 years away, Moscow is a city transformed.

In Moscow we did the must-sees: we explored the huge Kremlin complex, which encapsulates the history of Russia from the 13th Century to the present day (noting the latest addition: Mr Putin’s personal helipad); we marvelled at the onion domes of St Basil’s cathedral; we went to the circus.

But there were surprises, too: masterpieces of Russian art at the Tretyakov Gallery and a cemetery where we visited the graves of Chekhov and Messrs Kruschev, Brezhnev and Yeltsin. 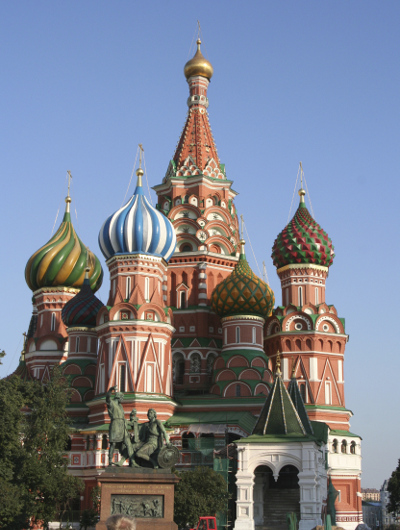 I was particularly taken with the funerary statues of General Kalashnikov (hero of Soviet labour and inventor of the rifle), a bespectacled Soviet bureaucrat (depicted on the telephone) and a famous clown, sitting forlornly on his own grave, in full make-up, hat in hand, dog at his side.

The Tretyakov was founded by a Russian merchant and patron of the arts, Pavel Tretyakov and now contains more than 170,000 works by Russian artists.

On this trip I saw twice as much of Moscow in 72 hours as I saw in seven days back in 1968 – and, thanks to our on-board lecturer, I understood infinitely more.

She emphasised the immensity of Russia (a country with 11 time zones) and, as we set off to cruise, first along the Volga and then down the Svir River to the Neva, we got a flavour of the scale of the vast and beautiful countryside and a taste of life outside the big cities.

Do it by rail. Europe’s Great Rail Journeys

The Greatest Art Gallery On Earth

Our stopping-off points included Uglich and Yaroslavl, famous for their white-stone churches and lost-in-time monasteries, and Kizhi Island, where the church of the Transfiguration, a wooden structure built entirely without the use of nails, is one of the wonders of the man-made world (with communism abandoned faith is back. And popular).

Our final destination was St Petersburg, founded on the Neva River in 1703 by Peter the Great, first emperor of Russia. We saw it mostly in the rain, but that’s not surprising. This part of Russia sees a maximum of 70 sunny days a year. 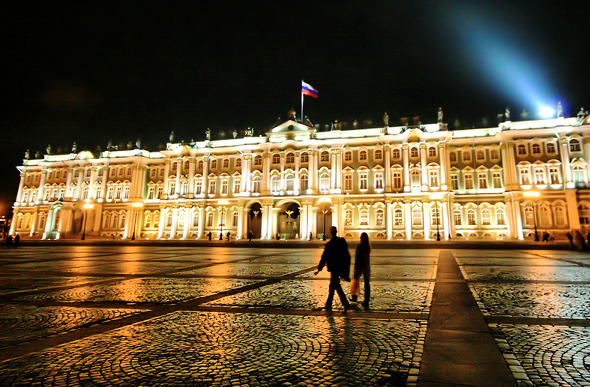 Forgetting the weather this is a must-see city. Do everything you can: travel the canals (this is Venice without gondolas), visit the Romanov tombs at the Peter and Paul Cathedral, explore the Yusopov Palace (where Rasputin was murdered), go to a performance of Swan Lake at the Hermitage Theatre or the famed Mariinsky, take an expedition out to Pushkin (named after Russia’s favourite poet) to marvel at the vast, Baroque palaces created under the empresses Elizabeth and Catherine the Great.

Above all, find as much time as you can to lose yourself in the Hermitage Museum, arguably the greatest art gallery on earth. Set in five buildings (once palaces of empresses and tsars) along the Palace Embankment it boasts three million unique items, from Faberge eggs to Impressionist masterpieces.

Give each item a minute and you will be there for six years. On a bad day, 40,000 people visit the Hermitage (the small cloakroom accommodates the coats, bags and umbrellas of up to 1,400 visitors).

The miracle for us was that our cruise controllers arranged early access. We beat the rush and, amazingly, I found myself standing alone in front of the painting I regard as the most moving I have ever seen: Rembrandt’s Return of the Prodigal Son. Pope John Paul II named it ‘the painting of the millennium’. I am not surprised.

Rembrandt, Da Vinci, Raphael, Michelangelo, Canaletto, Velasquez, Goya, the Hermitage has them all – and more. There are almost 14 miles of marbled corridors. We walked just three, wide-eyed and slack-jawed, in awe of high art. It was a proper climax to our imperial cruise.

"I don’t know about you," said a fellow traveller as we made our way back to the ship, “But I need a vodka. I’m all wowed out.”

Visit your local Flight Centre or call 131 600 for more advice and the latest deals on travelling to Russia.

This article was written by Gyles Brandreth from The Daily Telegraph and was legally licensed through the NewsCred publisher network.

Gyles Brandreth is a writer, broadcaster, former MP and Government Whip, award ceremony host and after-dinner speaker. A reporter for the BBC and a regular on Radio 4, his many books include The Oscar Wilde Murder Mysteries and The 7 Secrets of Happiness.
more articles from this author